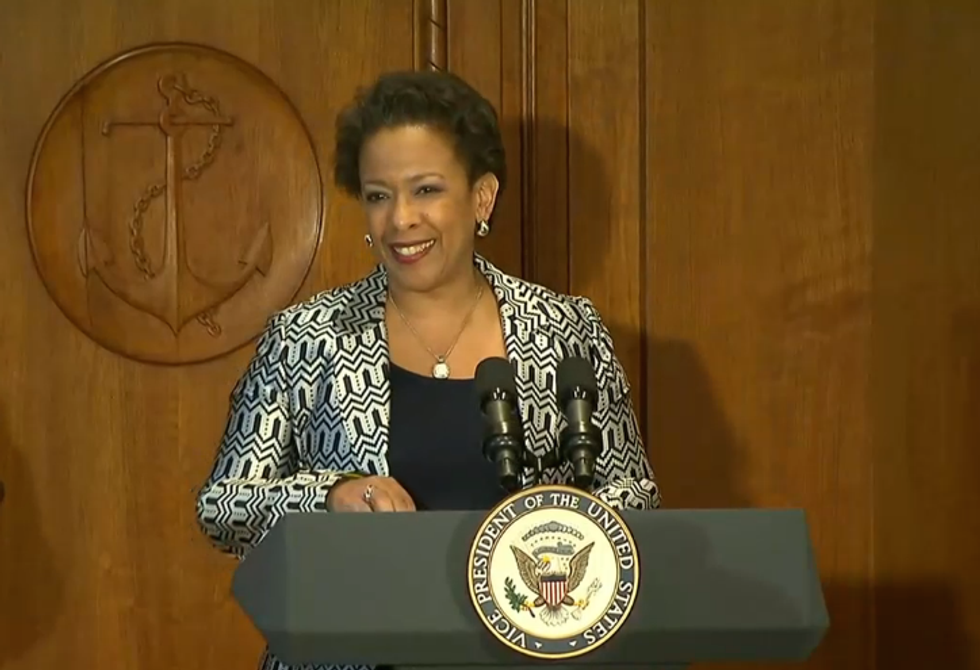 Well, that wasn't so hard! After waiting for a nearly record-setting 166 days to be confirmed, Loretta Lynch was finally sworn in as U.S. Attorney General by Vice President Joe Biden, who presumably saved his congratulatory groping for after the ceremony.

Lynch thanked her friends and family, and President Obama, and her colleagues at the Justice Department, and the Democratic senators who'd stood by her while she waited ... and waited ... and waited ... and waited some more. Even though Democrats could have just confirmed her during their lame-duck session after the November election, except they decided not to do that because they are wussy Democrats and still can't quite believe their frenemies across the aisle would ever do something dickish like repeatedly delay a vote on one of President Obama's nominees, for "payback," because they are, yes, dicks.

Lynch was first nominated in November, when we learned about her career as a prosecutor and how she is quite accustomed to being treated badly by white dudes her whole life, so she was fully prepared for the Republican-controlled Senate's confirmation process. We would not learn until later -- thanks to a Breitbart EXCLUSIVE! -- that she was also part of the team that defended Bill Clinton during the Whitewater investigation, except for how that wasn't actually her, never mind, Breitbart regrets the error.

Then we learned, in a very important press release from a group no one has ever heard of, that she totally maybe okay not really broke the law by making a plea agreement she had no part of because it was made before she was in office, never mind again.

During her confirmation hearing, we learned, thanks to the tough questioning by Republican Sen. John Cornyn, that she is not in fact Eric Holder, which is a plus, but that she would probably not throw the president in prison for issuing executive orders, which makes her unfit to hold the office. Also, she explained to Sen. Lindsey Graham the difference between polygamy and same-sex marriage, which we guess he was just asking about "for a friend."

Sen. Ted Cruz declared her so unsuitable for the job that it would be a "travesty" to even hold a confirmation vote for her. Which is why, when the Senate finally got around to that, he was busy doing other stuff instead of voting against her because preventing travesties in the Senate is for losers who aren't running for president.

After all the hemming and hawing and lesson-teaching and vacation-taking and unapologetically blatant bullshit, Senate Majority Leader Mitch McConnell finally allowed Eric Holder to quit his damn job already, and now Attorney General Lynch can carry on Holder's mission of fast and furiousing America, covering up Obama's criming, injecting race into racism, and god only knows what other conspiracy theories Republicans will invent to justify trying to toss her out of office, hooray.