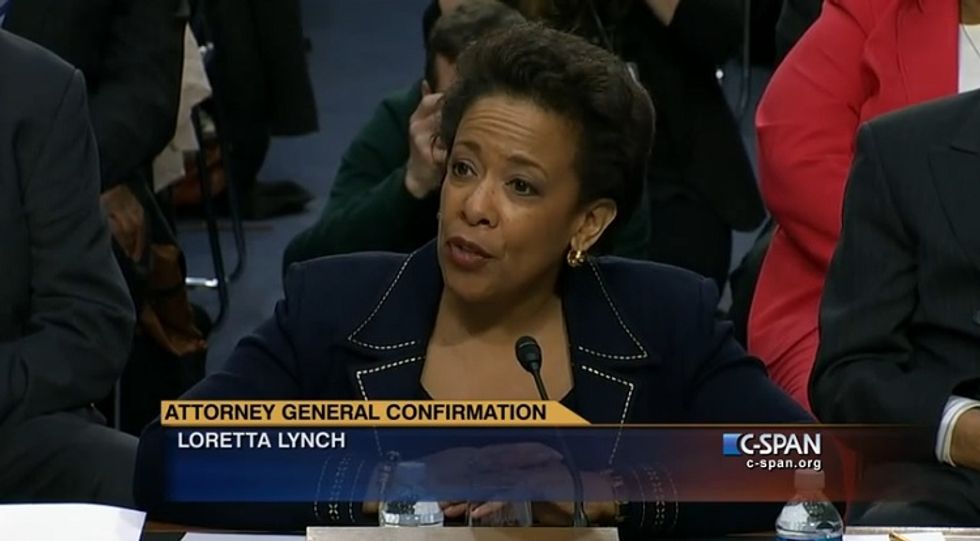 Wednesday was the first day of Loretta Lynch's confirmation hearings before the Senate Judiciary Committee, and so far, it looks like Republicans may consider her too "nominated by Barack Obama" to be confirmed as attorney general. In a fairly basic bit of identity clarification, Ms. Lynch claimed, in response to a question from Texas Sen. John Cornyn, that she is in fact a wholly different human being than the current attorney general:

“You’re not Eric Holder are you?” asked Sen. John Cornyn, a Republican from Texas, asked her [sic], provoking some laughter in the room. “No, I’m not sir,” replied Ms. Lynch [.]

In what is widely considered an extraordinary courtesy to the White House, Cornyn did not demand genetic evidence of the claim.

Getting straight to wingnut priorities, the hearing's very first question, from Judiciary Committee chair Chuck Grassley (R-Assume Deer Dead), sought to determine whether Lynch would stand up for the Constitution or support the president's lawless agenda of doing pretty much what every other president has done with executive orders. Asked whether she believed the president had the authority to make changes to immigration enforcement priorities by executive action, Lynch said she had reviewed the Justice Department's documents on Obama's immigration decision last fall and said, "I don’t see any reason to doubt the reasonableness of those views.” She sounds pretty radical, in other words, openly saying that she agrees with a president who's going to be impeached any day now.

On the other hand, when Sen. Cornyn, still worried that Lynch might be Eric Holder in drag, asked Lynch, "You wouldn't consider yourself to be a political arm of the White House as attorney general, would you?" she replied,

"No, senator, that would be an inappropriate use of the—"

"I'm sorry, you'd be willing to tell your friends 'no' if, in your judgment, the law required that?" Cornyn said.

"I think I have to be willing to tell not just my friends but colleagues 'no' if the law requires it," Lynch replied. "That would include the president of the United States." When Cornyn asked how Lynch would be different than Holder, she said, "I will be myself. Loretta Lynch."

For her nomination to go on to the full Senate for a vote, Lynch will need at least three Republican members of the Judiciary Committee to vote for her. One possible supporter is Lindsey Graham, who so far hasn't found any reasons to deem Lynch a threat to the nation, probably because he has not yet read the VERY INCRIMINATING press release exposing Lynch, Obama, the Clintons, and the entire U.S. government: [contextly_sidebar id="tsIyhqvBZ0ttQLhMVV8T6r5IqSJxGYES"]

“On paper she is a good choice and I like her personally, but she is going to have some hard questions,” Mr. Graham said.

Graham uncorked one of those tough questions during the hearing, asking Lynch to explain the difference between same-sex marriage and polygamy, which really is the sort of thing you'd think he could have looked up on Wikipedia:

If the Supreme Court rules that same-sex marriage bans are unconstitutional, it violates the constitution for a state to try to limit marriage between a man and a woman, that’s clearly the law of the land unless there’s a constitutional amendment to change it, what legal rationale will be in play that would prohibit polygamy?

What’s the legal difference between a ban on same-sex marriage being unconstitutional but a ban on polygamy being constitutional? Could you try to articulate how one could be banned under the constitution and the other not?

Graham then cleared his throat and added that he was "just asking for a friend." Lynch replied that she hadn't been involved in any of the cases going before the Supreme Court, adding:

And I’m not comfortable undertaking legal analysis without having had the ability to undertake a review of the relevant facts and the precedent there. So I certainly would not be able to provide you with that analysis at this point in time, but I look forward to continuing the discussions with you.

Despite his tough questions, the New York Times caught Sen. Graham positively bubbling over with ardor for Lynch's nomination:

We're going to have to assume that Graham has been rebuked for such remarkably pro-Obama sentiments.