Loser Kentucky Clerk's 15 Minutes Of Martyrdom Just About Up 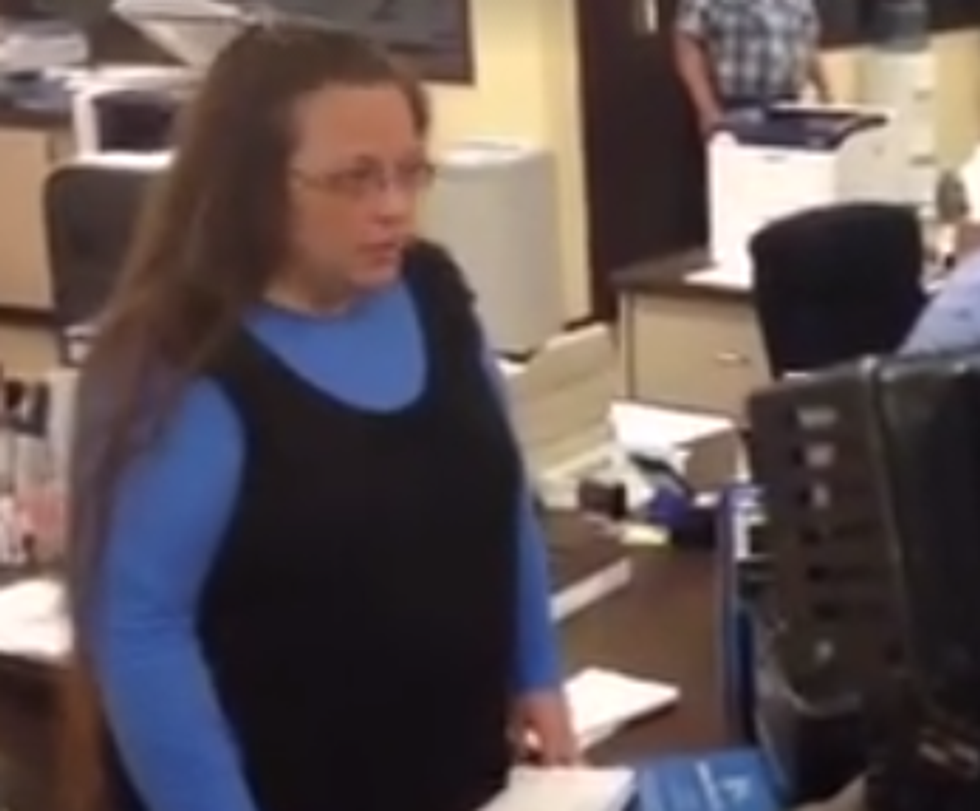 Nope, that is not what martyrs look like. Martyrs have swords or something, we think.

At the end of the day Monday, the Supreme Court issued a zero-sentence ruling, denying Kentucky county clerk Kim Davis's emergency appeal to PLEASE, don't make her do marriage licenses for gays. Justice Elena Kagan could have added "eat dirt, lady," but it was implied. And so Tuesday morning was her last stand, really. Would her piddly-ass brain suddenly finish maturing enough to let her make the adult decision to do her fucking job, or would she jump up on the world's lamest cross and beg her God to make her the world's stupidest martyr? She chose the latter. The AP has been live-blogging the events as they unfold:

A deputy clerk told April Miller and Karen Roberts, who walked into the office trailed by dozens of television cameras, that no licenses would be issued and refused to make Davis available.

A second couple, David Moore and David Ermold, rejected a fourth time, are demanding to speak with Davis.

Ermold shouted: "Tell her to come out and face the people she's discriminating against."

Davis explained later that she was doing this "under God's authority," which leads us to wonder why she appealed to the Supreme Court at all. Pro tip, lady: Your God doesn't have jurisdiction here! (And before wingnuts boo hoo about how they are being persecuted, NOBODY'S god has jurisdiction in this matter. That's not how America works, baby!)

This was the scene at the Rowan County clerk's office Tuesday morning, of Davis yet again denying the couple from this video a marriage license. She tells them if they insist on waiting, they're going to have a "very long day," which leads people to yell at her to do her fucking job. She also has supporters there, but they are irrelevant to this story:

Have the couples already called the ACLU? You bet your sodomite dick they have! They've filed to have Davis held in contempt. She might have to pay fines! She could go to jail! She could be roasted on a spit like a common rotisserie chicken, for her crimes! (Not the last one, Kentucky outlawed that YEARS ago. And also not the one about jail, maybe, because the plaintiffs aren't even asking for that.)

Davis's husband says they've gotten death threats (DO NOT DEATH THREAT PEOPLE, especially ones as insignificant as these), but he ain't scared.

"I'm an old redneck hillbilly," he said, "that's all I've got to say. Don't come knocking on my door." He added that his wife is just like one of those old-timey Bible martyrs, and then he showed everybody just how little he understands about what's going on here:

He pointed to the gay rights protesters gathered on the courthouse lawn and said: "They want us to accept their beliefs and their ways. But they won't accept our beliefs and out [sic] ways."

No sir, that is not what is happening. They want your dumb wife to obey the fucking law and do her job. If she is incapable of doing her job, she will not be martyred, but her assholish-ness might send you into financial ruin. And then her job will simply be filled by a more qualified applicant, one who understands the separation of church and state. We've suggested jobs Davis might be more qualified for, like cross-stitching Leviticus verses onto sweaters for cats, but she hasn't taken us up on those suggestions.

As we explained Monday, all of this is very silly, as Davis has already done a marriage license for two people who, at birth at least, had the same genitalia, so if she believes this is so serious in God's eyes, her one way ticket to never getting God's autograph after she dies is already signed, sealed and delivered.

So will this be the end of the road for Kim Davis, or will she continue to be obstinate, furiously trying to suck the last drops out of her 15 seconds of martyrdom, maybe even landing her dumb ass in jail? Only time can tell, but it's the second one, obviously, because she is A Idiot.