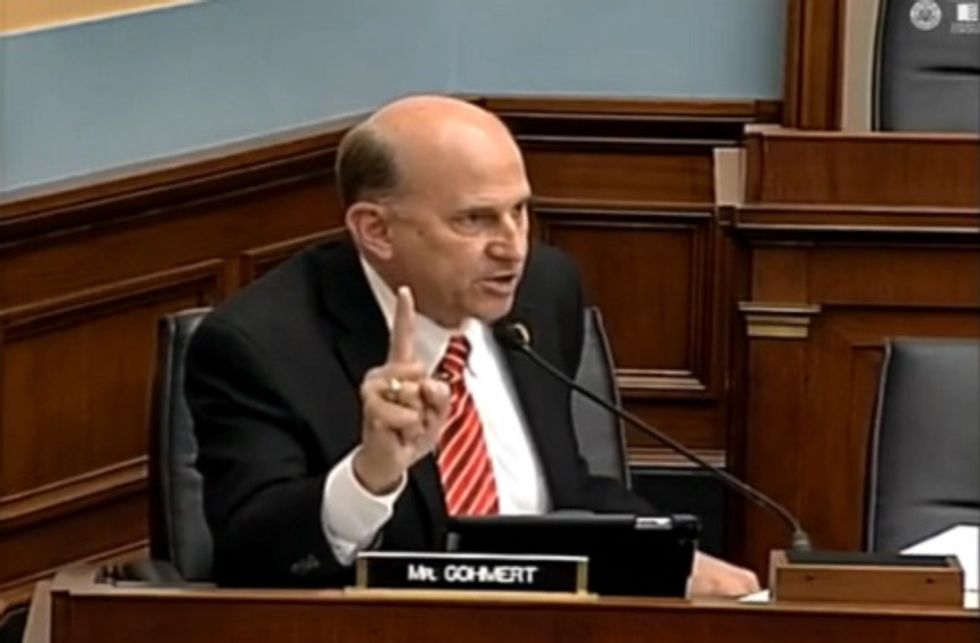 In a House Judiciary Committee hearing Wednesday, Texas congresstroll Louie Gohmert worried that Barack Obama has thrown America's doors wide, "luring" a bunch offilthy diseased foreign children to invade our once-proud land. You see, Louie recently went on a fact-finding trip to an Immigration and Customs Enforcement (ICE) facility in Texas, and he's pretty sure he saw something nasty in the woodshed.

Gohmert admitted that maybe it's a little difficult for immigrants to get from Guatemala to Texas, what with the danger and the heat and the crime, but that basically Barack Obama is almost literally hoovering the ninos across the border with his lax laxity:

“And what is occurring by this administration luring these children into America by the promise of a free pass once they get here, there are children that are suffering and being hurt, being lured here to their detriment. Now, if they get here successfully, that’s a different story.”

Somehow, Gohmert believes that seeing hundreds of people sleeping on a concrete floor in an ICE facility is evidence of this supposed "free pass," which sort of misses the point that those people are in detention and awaiting deportation. Still, they do get a nice comfy concrete floor, so that may be all they need to lure them in. They're easy. And worse, when they get here, a lot of them are diseased!

“I asked them about, ‘I hear there’s 18 cases of scabies here, where are they?’” Gohmert recalled. “Oh, you see the little red crime scene tape over here, that’s the best we can do because Health and Human Services won’t come pick up these people in a timely manner. So, they’re lying here on a concrete floor. And those 18 lying there on that concrete floor in that little area behind that crime scene tape are our scabies cases.”

“We’re still looking for all the lice cases, and the other cases, the flu cases,” he added. “And I didn’t get this from the federal folks, but from Texas folks who just sent 2,000 doses of H1N1 vaccine to Lackland Air Force Base. They say there’s a case of H1N1 flu at Lackland. Does anybody know for sure that is not true?”

We heard a rumor that you can't trust a word that comes out of Louie Gohmert's mouth. Does anybody know for sure that is not true?

Also, mercy and compassion are all well and good, but as Pat Robertson warned a couple years back, there's just no telling what kinds of defects those nasty orphans might have -- best to start with a nice clean American babby every time.

And now that we've rounded up and detained all these immigrant children, and are getting ready to deport them, what does Louie Gohmert want done?

"I’m telling you we’re not doing our job as a Congress, and the federal government is not doing their job in protecting us from those people who are coming in."

So there you have it! We've caught and isolated all these would-be immigrants, stopping them at the border and preparing to send them back. Now just what the hell is Obama going to do to protect us from them?