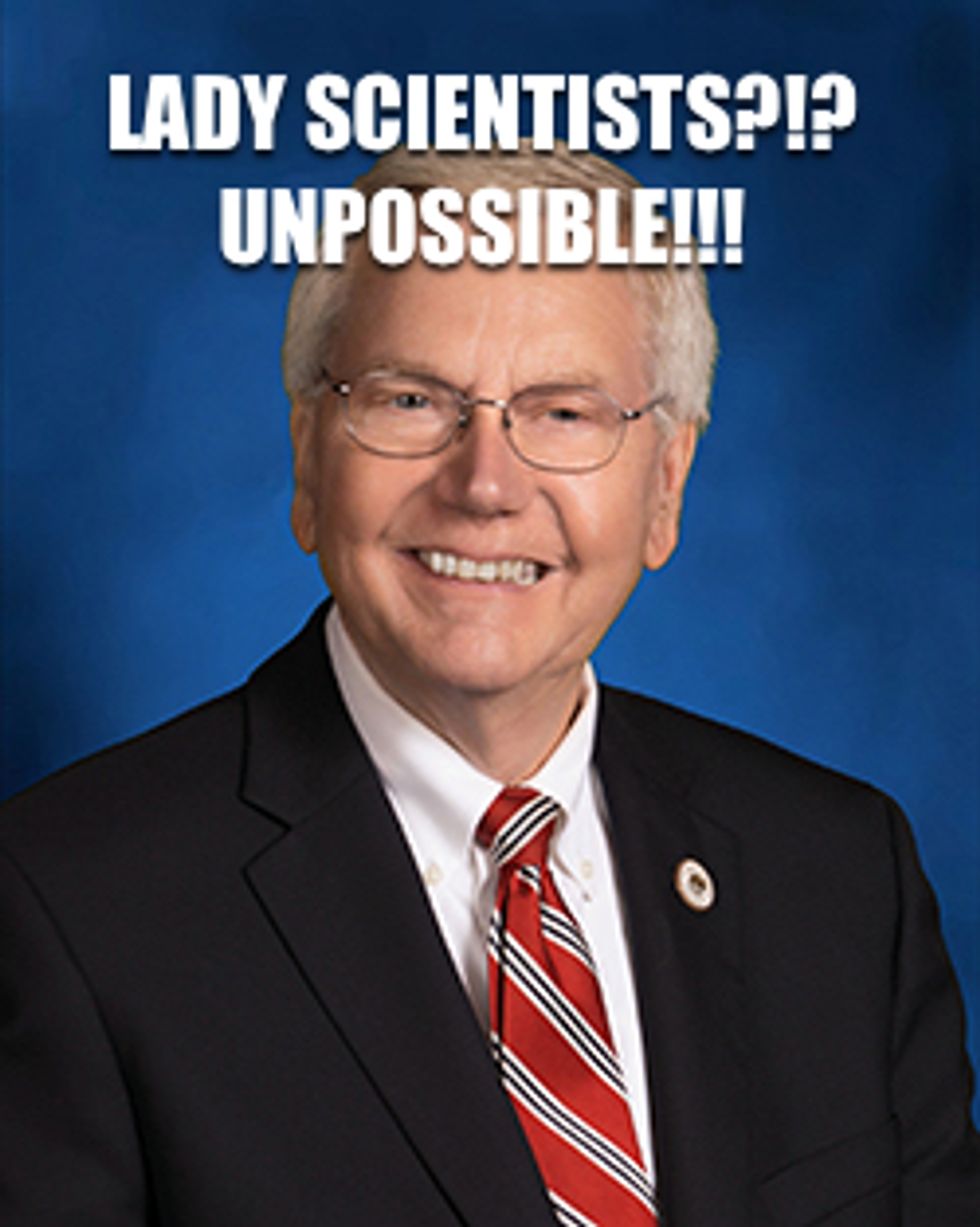 Louisiana Rep. Frank Hoffman (R-Ouachita, Gezundheit) is SO MAD at science you guys! He sponsored bills for Louisiana Society of Anesthesiologists Day on April 11, and YMCA Day on the 12. But he'll have no truck with So Called Science Day, Goshdarnit! All he asked from Science was to help him pass his Uh Huh Abortion Is TOO Reversible Act. Just last year he said, "Go forth and find me some proof that medication abortions can be reversed when Jesus comes into the heart of a fallen woman and shows her that a baby is God's righteous punishment for her sins." (More or less.)

WHEREAS, news reports published in February of 2015 indicated that Dr. George Delgado, medical director at Culture of Life Family Health Care in San Diego, California, had developed and successfully implemented a method of reversing what was thought to be the inevitably fatal effect of the RU-486 abortion pill; [...]

THEREFORE, BE IT RESOLVED that the Legislature of Louisiana does hereby urge and request the Department of Health and Hospitals to study whether the effects of an abortion induced with drugs or chemicals can be reversed.

BE IT FURTHER RESOLVED that the Department of Health and Hospitals shall convene a panel of experts in obstetrics and gynecology and pharmacology to provide guidance on this matter and aid them in their study [...]

Representative Hoffman is obviously not a regular reader of your Wonkette, or the American College of Obstetrics and Gynecology. Only last month we shouted the word VAGINA!!! at an Indiana legislator and explained to him that Dr. Delgado injecting six women with a massive dose of progesterone was NOT SCIENCE.

Because medication abortion requires this combination of medications, many women will not abort just from using the first medication. In 30-50% of women who take mifepristone alone, the pregnancy will continue…

Progesterone, while generally well tolerated, can cause significant cardiovascular, nervous system and endocrine adverse reactions as well as other side effects.

Representative Hoffman was probably too busy running the First Baptist Church's Cable Access Network to read our Mommyblog. But he did take time out of his Godbothering to bother the Louisiana Department of Health. And wouldn't you know it, they put a couple of lady scientists on the case! As if people who suffer The Curse of Eve know about babies!

The panel of experts convened by LDH to review this procedure unanimously concluded, based on their professional experience in the areas of obstetrics/gynecology, pharmacology, and nursing and the above-referenced research, that there was insufficient evidence to conclude that the administration of progesterone in an attempt to reverse a medication abortion is scientifically sound. In reaching this conclusion, the panel expressed great concerns about the experimental nature of using progesterone treatment after taking mifepristone, as highlighted in the Delgado study, and the failure of the study to meet the established standards of safety, efficacy, and ethics.

Well, that just makes Frank Hoffman sad. Utah and South Dakota were able to see past the propaganda put out by the American College of Obstetrics and Gynecology to pass this law. He wishes you ladies could overcome your emotions and examine the scholarly publications of LifeSite News.

Hoffmann told Rewire that he was “disappointed” by the health department’s report, and said he had hoped the department would do a more exhaustive review of the medical evidence. Hoffmann said that the report would not deter him and other lawmakers from bringing the issue before the legislature.

Representative Frank Hoffman forgives you, Daphne Robinson, JD, MPH and Amy Zapata, MPH, for you know not what you do. But don't fret, because he's willing to turn the other cheek and sponsor a law that entitles hussies to get a massive shot of hormones that have no impact on the viability of a pregnancy. Like a shepherd who watches over his sheep. Amen.

Please donate a dollar for our abortion reversal fund. Just kidding! Or are we?????