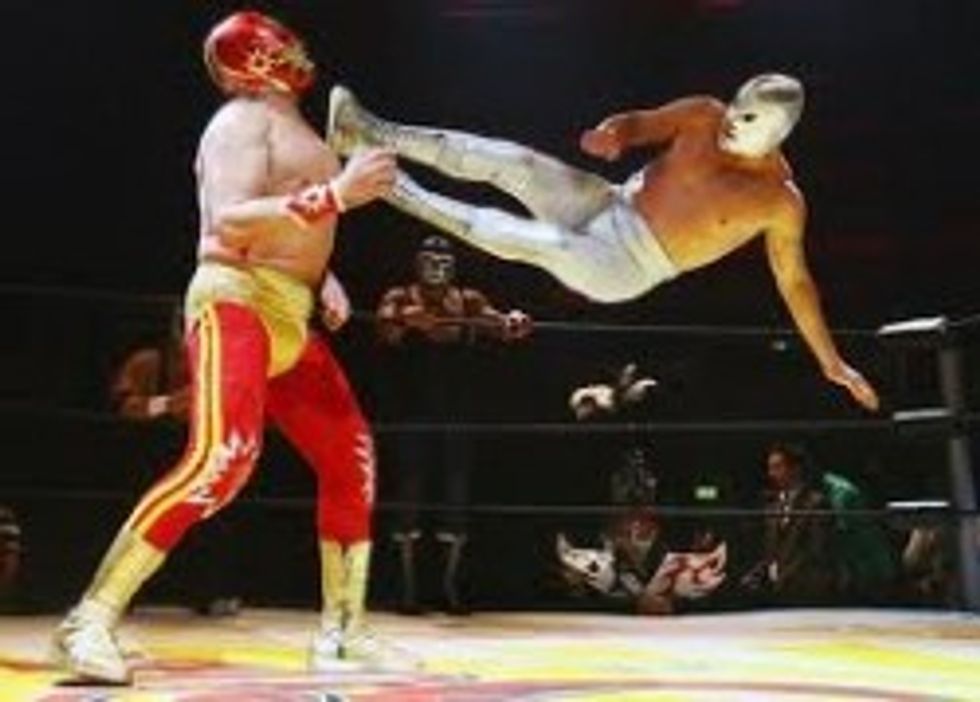 Enter the warrior, he’s today’s Tom Sawyer, they call him RJ Brewer and he waves his flag in one hand and a copy of SB1070 in the other. RJ Brewer, being thefake son of Jan Brewer, fake governor of Arizona, enters the ring as if he owns it. Waiting for his opponent, he stops to educate his audience on the ways of this nation per Jesus, white Jesus, white English speaking Jesus. Basking in the glory of being one of the chosen is short lived when the clouds part, the sun rises and the crowd begins to cheer. The anti-American, the hero, the Mexican comes marching down the ring with ten tons of ass kicking odelay ready to tread where he pleases. But RJ learned by watching mommy. He knows how to shake a finger at a person of color.

RJ’s fake mom has established herself as quite the opponent outside the ring for the Latino community and has served as an example to such other anti ‘Lucha Libre’ governors as Scott “The Union Knocker” Walker, Rick “Pray For Rain” Perry and Chris “Extra Large Pizza, Double Cheese, Pepperoni, Sausage, Meatball, More Sausage and a Diet Coke” Christie. You may remember such wrestling moves that Gov. Brewer invented such as the “Prison Cell-Out Suplex” which involves a prison lobbyist and Jan flipping over on her back and leg locking her opponent’s waist until he coughs up money.”

This isn’t about the known definition of ‘free wrestling’ that Lucha Libre is known as. This is all out ‘freedom wrestling’. Unlike freedom as we know it, Lucha Libre outlines the trials and tribulations of the hard working Latinos trying to grasp onto the American dream and do so by kicking the shit out of a very well paid white wrestler.

The Huffington Post claims the history of Lucha Libre began in the '30s, but it actually stems back well before when it was known as ‘Two Mexicans Fighting In The Street.” Lucha Libre has been known to dip its juevos in other political mixes such as the cold war and racism. The characters made up in this new and improved form of slapstick ass kicking entertainment provides a new twist on classic Lucha Libre platforms. There’s a strong element of ‘us verses them’. We are them and they are us. Lucha Libre’s newest theme signifies a change in current and is showing to be effective by the large number of audience members attending. The word is getting out that Lucha Libre has something to say. Should white people be nervous? Maybe. We can always wear hoodies if we go out.

Here is Steve Ship, CEO of Lucha Libre USA: "It's something that we've been building in our TV shows and we've gotten a lot of positive reaction to it.” Not to be outdone, America has swung back with its own force of historical relevant fight tactics and has mailed off fifty thousand blankets infected with small pox to poor Mexican villagers with hopes of getting into the spirit of things. Mitt Romney has donated 100,000 rags, mops and vacuums to Lucha Libre and the other three candidates got together and bought a picture of the Virgin Mary to put on Lucha Libre’s dashboard.