Ma And Pa Duggar Still Trying To Make ALL The Babies, For Jesus 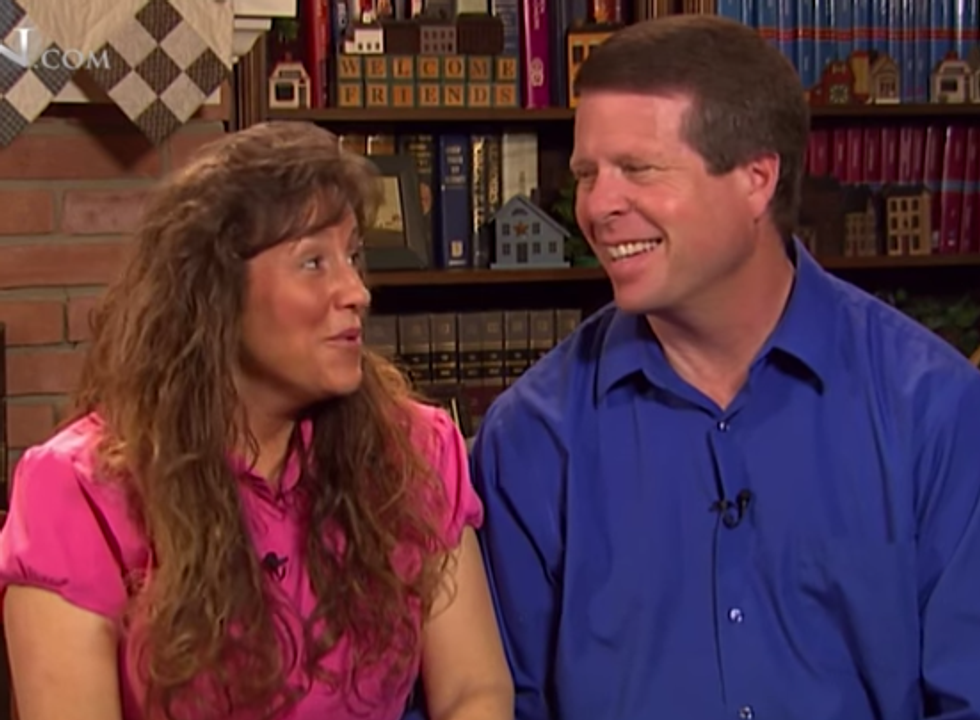 It would seem that Jim Bob and Michelle Duggar have taken your Wonkette's advice, about how they need more babies, since the Muslims are going to outnumber the Christians very, very soon (55 years from now). So off to the marital bed they have been skipping, because according to their own words, they've been fuckin'. In a new interview with the Christian Broadcasting Network, they explained that they are SO EXCITED that their grown-up opposite-married kids are having all the babies (three this year, which is far more output than Michelle ever was able to manage when the Duggar Vagina Clown Car industry was a one-woman operation), and if The Lord is still interested, they'd love it if He would put some more Duggar babies in her babycave, via the holy rod and staff of Jim Bob:

INTERVIEWER: Jim Bob, you said you're totally open to you and Michelle having some more babies!

MICHELLE: And we would LOVE more children, if God saw fit to bless us and give us more, we would welcome them, just be thrilled about that.

JIM BOB: But we also realize that we may not be able to have any more, but this year, we're having three grandchildren, and I have a feeling it's just going to multiply out from there.

EXPONENTIAL DUGGAR SPAWN MULTIPLICATION! They're going to have to change the name of their teevee program so many more times!

So anyway, they're making sex on each other all the time, and hopefully Jesus will see how hard they're boning and see fit in His Infinite Wisdom to give them more babies, but they know that sometimes Jesus says "no" to prayers, sadface.

But all the grandbabies! The Anna Duggar one (wife of Josh, the dumb asshole who works for the Family Research Council hate group) is about to have a baby; the Jessa one just announced that, while she may know that atheists aren't real, due to Creation Science, the baby in her butt SURE IS; and the Jill one birthed one earlier this month. And apparently Jill had a very hard labor, but made it through, so we are very happy for her. Michelle Duggar says she told her daughter, "There's a reason they call it LABOR," and the teevee interviewer agrees and says, "You should know!" Hahaha, broodmare joke from the Jesus teevee interviewer!

So anyhoo, Michelle Duggar is clearly feeling the pressure, what with all her babies having babies, and doing it faster than she does, so it's time to do some more P-in-V for the J.C., praise Him!