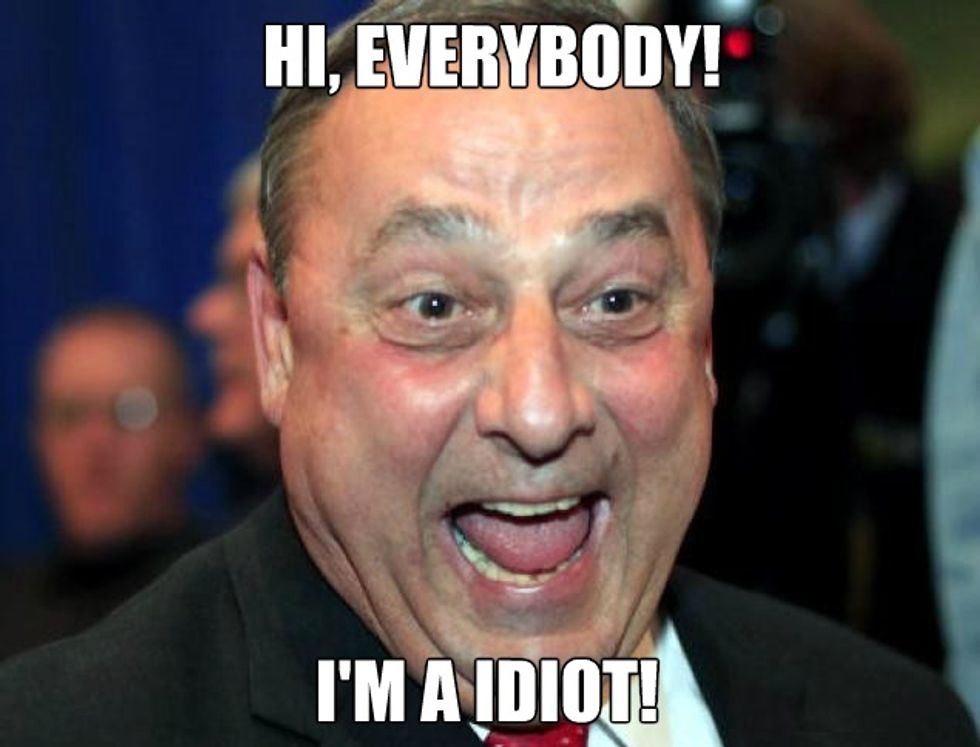 Just in case you were wondering, vitriol-fueled weaselborg Maine Governor Paul LePage is never going to join LBJ or even Harry Reid in the ranks of politicians of whom people say "Love him or hate him, he sure knows how to work parliamentary procedure!" This is largely thanks to his complete failure to "pocket veto" a bunch of bills he didn't like, including one measure, LD 369, that would provide financial assistance to refugees and asylum seekers. LePage hates the bill, calling it "illegal alien welfare." So he refused to sign it and another 18 bills. Just one problem with that: under Maine law, LePage did it completely wrong, as Think Progress explains (if you listen carefully, you can hear writer Tara Culp-Ressler giggling right through the text):

At issue, however, is the “pocket veto” process in Maine. If the state legislature has concluded for the session, the governor’s inaction on a piece of legislation over the course of 10 days ensures that it’s “pocket vetoed,” without giving lawmakers a chance to vote to override the decision. It appears that LePage intended to use this process to reject the asylum bill, among other pieces of legislation, including a measure to prohibit the shackling of pregnant inmates.

There’s just one problem: Maine’s legislature is still in session, so LePage’s inaction didn’t work as planned. Instead of vetoing the bills, his 10-day delay may now allow them to become law without his signature, according to the state constitution. The ACLU of Maine says that it’s clear to them that the legislation should be allowed to take effect.

Oopsies. As the Bangor Daily News notes, the strategy done blowed up in LePage's face:

LePage has used racist language and lies to characterize the asylum seekers as “illegal.” Attacking them was central to his re-election campaign and his legislative strategy.

Now, unwittingly it appears, he has allowed a bipartisan bill to become law that allows asylum seekers to receive General Assistance for up to two years.

Why didn't LePage just straight out veto the bills? It looks like he wanted to avoid the possibility of an override by the state legislature, where both Republicans and Democrats are increasingly getting tired of LePage, and are in fact considering impeaching him over his threat to withhold funding for a school to hurt a political enemy.

House Majority Leader Jeff McCabe, a Democrat, said there's no two ways about it: those bills are now law.

The law is clear, the Constitution is clear: We’re still in session; we haven’t adjourned, so a pocket veto isn’t even an option ... So in the meantime, we should celebrate these bills becoming law.

Insert your mental audio file of Nelson from the Simpsons going "HA-haah!" here.

Asked about the governor's reasons for not taking action on the bills, LePage spokeswoman Adrienne Bennett explained -- incorrectly, apparently -- that it was all pretty clear, pointing to the section on the pocket veto in a state publication on how bills work and saying, "I’m surprised the Legislature does not understand this.” It's not clear whether Bennett also hummed the tune to "I'm Only a Bill" to underline her completely inaccurate point. Duh. What part of our complete misreading of state law don't you understand?

So now a whole bunch of things that LePage thought he'd cleverly killed -- so dead that the legislature couldn't even override him -- are now in fact law. Heckuva job, Paulie.

At this rate, the Maine Lege may not even need to impeach LePage -- he might just find a way to accidentally resign. But that shouldn't be a problem -- Donald Trump could always use a sharp political mind on his team.