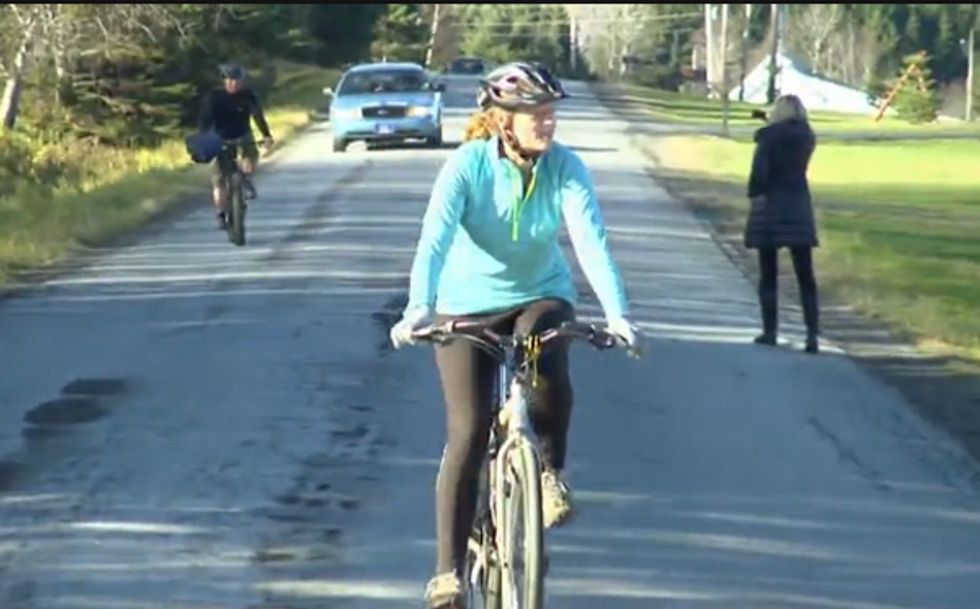 A small victory for science over fear today, as aMaine judge rejected Gov. Paul LePage's attempt to impose a quarantine on Kaci Hickox, the nurse who has twice tested negative for Ebola and is in good health with no symptoms of the scariest disease in the world.

Judge Charles C. LaVerdiere ruled Hickox must continue daily monitoring and coordinate travel with state health officials to ensure continuity of monitoring. The judge said there's no need to restrict her movements because she's not infectious because she's showing no symptoms. With the judge's ruling, a state police cruiser parked outside her home drove away.

Now hold on just a second, here! Gov. LePage had said that State Police car was there to protect Hickox from the angry mob that he thought might show up to attack Hickox if she did something stupid like going outside. And now he's removing the cop? You might almost think that LePage was fibbing or something. Who knows, maybe a mob will still turn up. As Tommy Christopher over at The Daily Banter notes, LePage was very concerned about poor Kaci Hickox getting hurt. Or at least about the location of her potential lynching:

She told us she was gonna do it. The day Obama came, she was gonna have no more restrictions. And so, she’s playing on my patience. Right now, whether she likes it or not, we've put a State Police on her, just to try to protect her, because it's...the tempers are startin' to rise up there and I don't want her to get hurt, either. If she gets hurt, I don’t want her to get hurt in Maine.[Emphasis added]

That's awfully nice of him, to help drum up an angry mob and also provide some protection from it, at least until a judge actually said the Hickox is a free human being who isn't a threat to anyone:

Speaking of which, the news of the judge's decision was not entirely well-received on Twitchy: Yes, and we heard she carried her roommate's vomit in a water bottle on the plane and was seen drinking it during the flight, while she cackled on her Obamaphone about her secret ties to the CDC. And then she kicked a puppy and peed on the flag. That's how we heard it. The Bangor Daily News reports Gov. LePage replied to the judge's decision with exactly the dignity and decorum that we've come to expect:

Gov. Paul LePage expressed disappointment with the judge’s decision Friday, saying the state would nonetheless abide by law. “She’s violated every promise she’s made so far, so I can’t trust her,” he said Friday, answering reporters’ questions after a press conference celebrating a business opening in Yarmouth. “I don’t trust her” [...]

“We don’t know what we don’t know about Ebola” LePage said. “Therefore, I’m a little disappointed. But the monkey’s on [the judge’s] back, not mine. He made the decision, we will abide by the ruling.”

LePage then urged Maine residents to remain calm if they were capable of doing so in the face of Hickox's continued provocations, which are just making people panic. Then he asked reporters if they could light his torch, and noted the ready availability of a nearby pile of pitchforks. [TPM / Daily Banter / Bangor Daily News]