Make BBQ Shrimp and Grits, Because F*ck It, No One Lives Forever 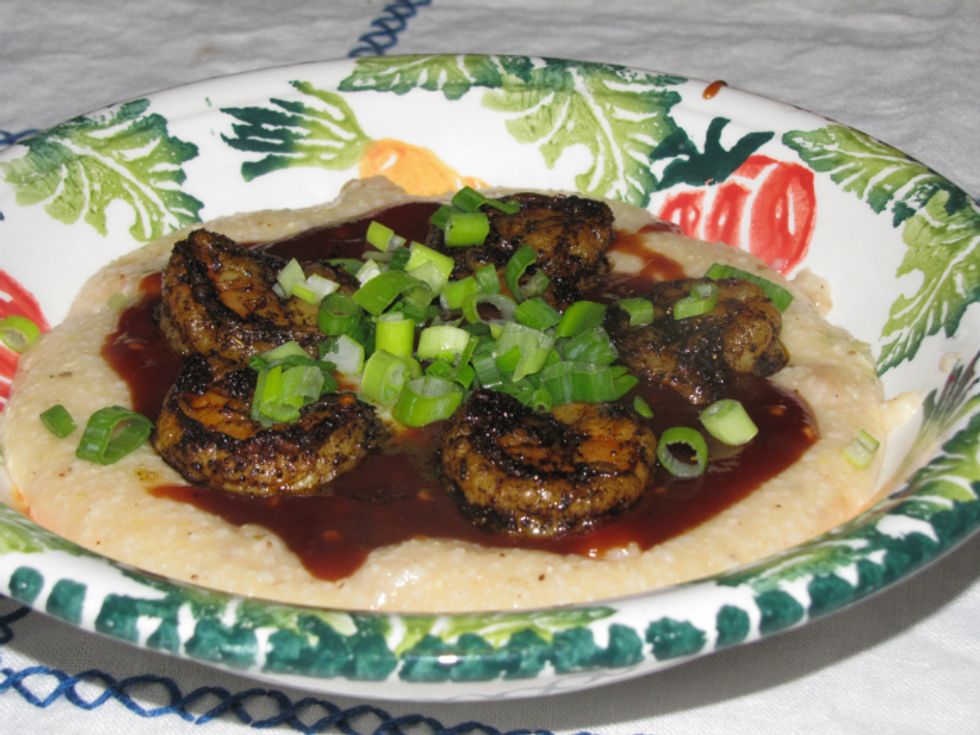 Shrimp and Grits are a classic Southern staple. BBQ is a classic Southern flavor. When you combine the two, your taste buds will forcibly eject themselves from your mouth just to high-five each other. (I promise it's not as terrifying and Fincher-esque as it sounds.)

Because we made this as a pre-Thanksgiving meal, we (and by "we," I mean my fiancee, while I stood there with a notebook recording measurements like a derpy sumbitch) made it for an entire family of people, so the amounts here are going to serve eight. Feel free to cut down proportionally if you want to not spend the next week drowning in grits. Just remember: if you fail to eat a metric fuckton of grits, the corn wins.

“But Pinkham,” you plead. “Can you not cut down the proportions for us?” No, because I was told there would be no math. It’s cool, you got this.

Let’s start with the BBQ sauce. Ultimately, you can use whatever BBQ sauce recipe you want; nearly any of them are going to work to offset the creaminess of the grits. Enjoy the sharp, vinegary taste of East Carolina BBQ sauce? That’ll work! Is your deal the mustardy South Carolina version? Hey, that’s fine! Feeling in the mood for the spiciness of Texas-style? Go for it! Kansas City, Memphis, Florida; they’re pretty much all going to work (except mayonnaise-based Alabama white sauce, because that’s not BBQ sauce, it’s edible waterboarding). If you want to use your own BBQ sauce recipe, skip the next two paragraphs.

Ours belongs to none of those categories; instead, it’s from the “What’s in the Fridge? Fuck It, That’ll Work” school of mystic culinary MacGuyverism that is my fiancee’s stock in trade. To give you an idea of flavor profile, of all of the above versions, ours is probably closest to Kansas City, in the same way the closest genetic relative of the elephant is the hyrax.

We’ll start with a base of one cup of Sweet Baby Ray’s Original. From there, add in 1/8 cup of ketchup and 1/8 cup of mustard. Throw in three teaspoons of minced garlic, then a tablespoon of honey, a tablespoon of brown sugar, a teaspoon of soy sauce, about a teaspoon and a half of balsamic vinegar, half a teaspoon of salt, and half a teaspoon of cumin. Finish with about a teaspoon of hot sauce; we went with Frank’s Red Hot, because I’m reasonably certain my fiancee would marry a human-sized bottle of Frank’s Red Hot were she legally able to do so. Mix it all together, and there’s your BBQ sauce. Set it aside. While you’re in prep mode, go ahead and chop a bunch of green onions (aka The Vegetable That Hangs Out With the Cool Foods) and set them aside, too.

Now, the grits. We used 5-minute grits, because we are not self-respecting Southerners. Dump eight cups of water into a large pot, add two teaspoons of salt, then bring it to a boil. Throw two cups of grits in there, turn the temp down to low, cover the pot, and keep one eye on them until they’re done.

While the grits are going and your sauce is set aside, it's time to hit the shrimp. We're going to use both bay and jumbo shrimp. If you want to use one or the other, though, that’s totally fine. Adjust amounts based on whatever preponderance of shrimp is your delight.

Now, finally, it's shrimp time. Go ahead and add those tasty little sea spiders -- a goddamn pound of them, because we brave travelers fear no crustacean -- to the pan. Mix them in the spices and cook for around 4 minutes.

Once they're good to go, set them aside until the grits are finished. Speaking of which, the grits should be getting close to done at this point, so throw two tablespoons of butter, three tablespoons of heavy whipping cream, and two more teaspoons of salt in with them, because what's a little blood pressure between friends? (Also, I'm secretly trying to murder you.) When the grits are done, pour the bay shrimp in and simmer.

Now on to the batches of jumbo shrimp. Yes, batches, because we’re going to blacken those little bastards. We’re assuming 4-5 shrimp per person, so about 30-40 total here. Add another tablespoon of butter and olive oil to the pan and set it to high heat this time. Add three teaspoons of cumin, a tablespoon of chili powder, a tablespoon of oregano, half a teaspoon of black pepper, and half a teaspoon of salt. Your pan should be giving off smoke like a Vegas slot machine lady at this point, so toss 8-10 shrimp into that smoking spice mix and cook, making sure you blacken them on both sides. This won’t take long; probably about 3-4 minutes for each batch. Make four batches of these guys, or however many you need to quell the desperate crustaceophile longing in your soul; Wonkette won't judge.

Once the blackened jumbo shrimp are done, dole out the bowls of grits, top with a bit of the BBQ sauce (a nice swirl on top is plenty; a little goes a long way here), add the jumbo shrimp, and sprinkle some of the rest of the chopped green onions (the actual green half of the bunch you cut up earlier) on top.

Hey, look at that: you just made a metric fuckton of BBQ shrimp and grits! Go you! Sure, eating this meal will probably shave a week off your life, but fuck it, you weren’t going to use that week for anything anyway. LIVE (AND ALSO DIE) A LITTLE.