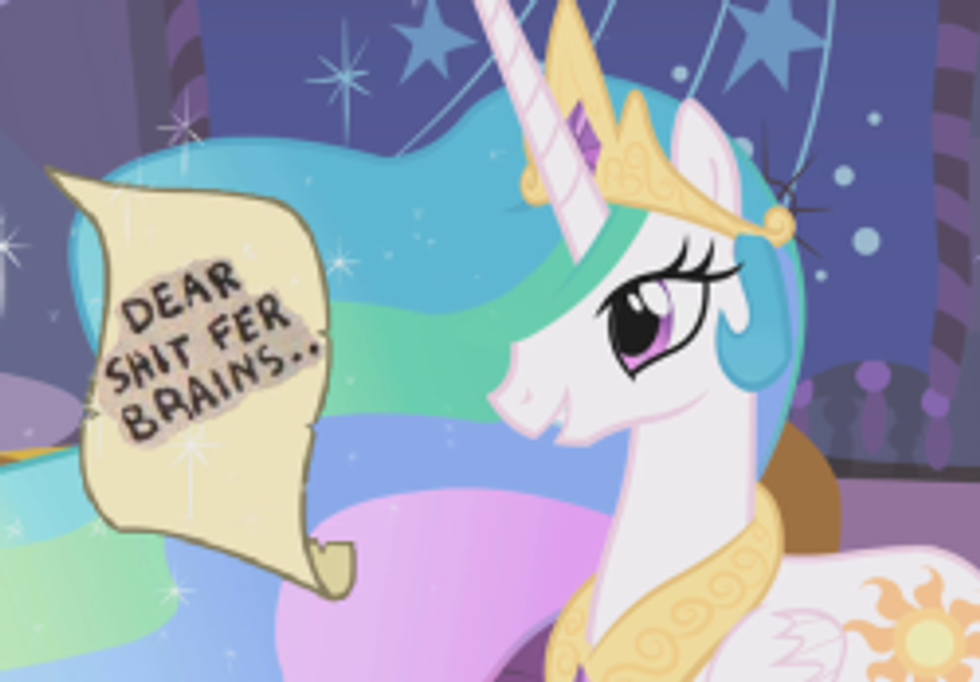 In a Very Special Episode of Deleted Comments of the Day, we bring you a couple of comments from Mr. Austin Ruse, the subject ofour July 2 story about how the Food Network violently assaulted his eyeballs and earholes with a shocking depiction of two lesbians standing in a kitchen. Mr. Ruse is the chair of something called the "Catholic Family and Human Rights Institute," which has been saving the American family from the United Nations since 1997. Mr. Ruse writes with an important correction to our story! It seems that RightWingWatch's transcript of Ruse's radio rant contained an egregious error! Details, corrections, and an abject notpology after the jump!

To briefly recap, Mr. Ruse went on the American Patriarchy Association's radio program to complain about this time when he was watching Chopped on the Food Network, and to his horror, a lady chef put her arm around another lady and she called that lady her "wife" right there on cable teevee before Ruse could even hide his eight-year-old daughter Lucy in a Safe Room somewhere, and then they saw the lesbians and the lesbians looked right at them!! As Western Civilization collapsed around his living room couch, Lucy asked him, "Did she say 'wife?'"

But do you know, that old Ruse was so smart and so slick, that he thought up a lie and he thought it up quick:

“And I said, ‘No, I think she meant girlfriend.’ And Lucy said, ‘I think she said life.’ God bless the innocence of this child. But they will not let us off the mat, the ideologies who want to cram this thing down our throats no matter where we go.”

And this is where that correction comes in! Mr. Ruse signed up for a commenting account (which he will not get, because are you kidding?) and settled our hash!

The smart kiddies at Right Wing Watch got this wrong. I did not say "ideologies", I said "ideologists". I do believe that unnatural sex makes you stupid.

Well, okey dokey lokey, that makes all the difference in the world, then! We kind of figured that was a transcription error, but thanks for clearing that up, Mr. Ruse, because that completely makes your opposition to lesbians on TV cooking shows far more logical! We were hoping that maybe you'd address our original cavil with the statement, which was why Austin Ruse thinks lying to his child is a good idea. What about that, huh?

Oh, yes, and the notpology, which we almost forgot: Wonkette regrets RightWingWatch's error.

In any case, Mr. Ruse was not yet finished telling us off, because he left a second comment:

In case anyone is still reading this thread, not that any of you really care, but I stand by what I said. Stop jamming your ideology down our throats. Millions of people may support your basic desires, but those same people object to what we see as the propagandizing of our children.

Again with the throats and the jamming! And the cooking shows with their filthy dyke chefs having explicit gustatory relations right there in the kitchen!

Of course, Austin Ruse, President of the Catholic Family and Human Rights Institute, does not even get to the real scandal about this Chopped television program, which is that they assign you a basket with squid and rubber cement in it and then the judges go "I CAN BARELY TASTE THE RUBBER CEMENT HOW DARE YOU!" and then they are overly outraged by EVERYTHING, like "THIS RICE IS A CRIME AGAINST RICE" and "there's too much FOOD on this PLATE." And by the end of the show they have totally convinced you that all the contestants suck. This is because all of the contestants do, in point of fact, actually suck the most, and the prize on the show is like a high-five, $20 and a cab ride home.

Yr Doktor Zoom spends all his time doing blog things, and the above description of Chopped is pieced together from the Sekrit Wonkette Chatcave, and we have no reason to doubt a single word of it.

Also, too, congrats to the Chopped host, Ted Allen, who just got ENGAGED TO HIS BOYFRIEND after DOMA was overturned. He's come a long way since Queer Eye for the Straight Guy, so it is totally confusing why he would have lesbian contestants on his show. Anyway, Ted, you can expect a nastygram from Austin Ruse any day with an invitation to unjam your ideology from his throat.