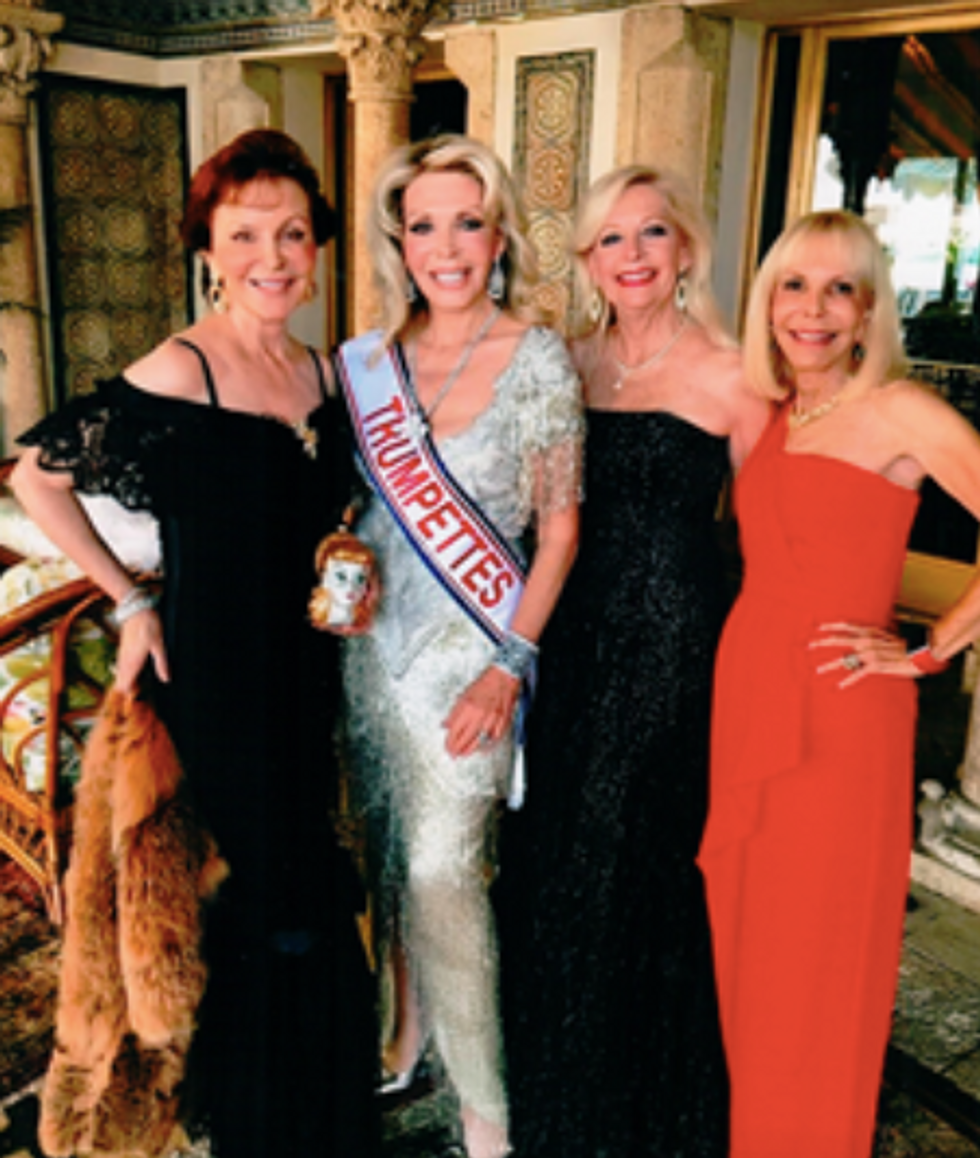 Look, for the record, we give no shits what rich people do with their money. If you want to spend half a billion dollars on a painting, that's got nothing to do with us. But don't bribe the president and pretend you're doing it for charity. Because that's just gauche!

Last January, having wiped his rear with the constitution's Emoluments Clause, Trump rechristened his Palm Beach trash palace "The Winter White House" and doubled the initiation fees. Everything was ka-ching-ing along beautifully until those Tiki Nazis got carried away in Nashville.

David Fahrenthold at the Washington Post has been tracking charity gala cancellations at Trump's Florida club.

During the summer, 19 charities that had events scheduled this season at Mar-a-Lago abruptly quit after Trump defended participants in a violent rally in Charlottesville organized by white supremacists.

After Trump's "very fine people" speech, most reputable charities decided to take their fundraisers somewhere NOT associated with Nazis, thankyouverymuch. Weirdly, donors didn't want to patronize the business of a racist nutjob with his stubby fingers on the nuclear button.

Some members of Mar-a-Lago found that their friends didn’t want to be invited to galas there anymore.

“‘If it’s at Mar-a-Lago, then we’re not going,’” one former Mar-a-Lago member said he was recently told by a friend. The member quit recently, and he asked that his name not be used, to protect his friendships in Palm Beach. “It’s not the charity that matters anymore. It’s the venue.”

O RLLY????? Did the charity ever actually matter? Like we said, we don't care what you do with your giant piles of money, rich people. But let's not pretend that a party that cost $400,000 and raises $50,000 was ever about charity. Sure, you want to fete your big donors, aka "friendraising" as opposed to fundraising. But let's not kid ourselves that an event which donates less than 20% of the ticket price is something other than a party.

The news was better for the Bethesda Hospital Foundation, which moved its Nov. 9 luncheon to a club in Boca Raton and had room for 100 more guests than it could fit at Mar-a-Lago. The lunch raised enough to buy a new physician-training tool: the Victoria S2200, a $60,000 robot woman who gives birth to a robot baby.

Nice robot, but for the price of the tickets I'm betting you could have bought five of them.

Lara Trump, the president's looniest surrogate, has formulated a cogent response, and it is WHY DO YOU HATE ANIMALS??? DEMOCRATS MURDER PUPPIES!!!

Clearly the botox is eating this woman's brain. Mrs. Eric Trump chairs the annual gala for the Big Dog Ranch no-kill dog shelter. After Trump's "very fine people" comments, Big Dog announced its intention to move the event to its own campus. But it's back now, because, "My furry companions loved the attention over the years at The Mar-a-Lago Club and said they would only support us if we returned to our favorite yard." You hear that, liberals? You even made the dogs cry! Hope you're proud of yourselves.

So now that all the legitimate charities have noped out, Mar-a-Lago is down to taking money from people who want to associate with the president. The kind of people for whom lining the president's pockets is a feature, not a bug.

Florida conservative activist Steven M. Alembik, for instance, is planning a 700-person “Truth About Israel Gala” at Mar-a-Lago in February. He plans to charge $600 a seat. He says he expects Mar-a-Lago will keep most of it, and that’s fine.

So they're explicitly giving the president money for his foreign policy positions. Cool cool.

Or The Trumpettes USA, led by a totally normal lady named Toni Holt Kramer, "who has turned part of her home into a sort of shrine to Trump."

She's hosting an 800-person party in January at Mar-a-Lago to celebrate the anniversary of Trump's inauguration. Her dog Caviar Deux (we shit you not) is the official Trumpettes mascot.

Tickets are $300 including dinner and a band.

“I don’t think any president has ever had such a rough nine months,” Kramer said.

Yes, Mrs. Kramer has picked a charity, and it is Donald J. Trump.

Well, we had a good run, America. It's all downhill from here.

Please contribute to the Wonkette fund for Botox, Restylane and Juvederm. We're crashing a party at The Winter White House, and we want to look the part.