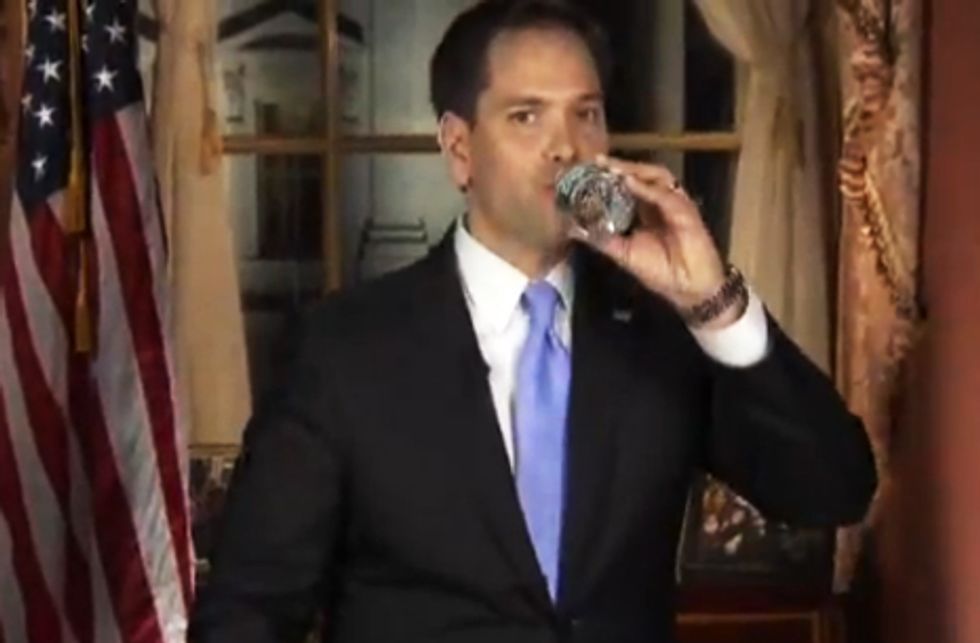 Aww shit, it's from Flint!

[contextly_sidebar id="VtoiwEjVwxuuivtW4VFsjJcOXNltx8P3"]You know how it can be when you're running for an important job like president of the United States. There are so many flights and meetings and speeches, you barely know what city you're in. You have to cram all sorts of facts into your head, like who the president of Ubeki-beki-bekistan is, and for godssake, you have to know the price of a gallon of milk, because some asshole reporter's going to ask you that. So you miss a few things, like baseball scores, or the latest movies, or the lead poisoning crisis in an entire American city's water supply. Which explains why, according to Time reporter Zeke Miller, Marco Rubio hasn't followed one minor story in one mostly minority city:

Like anyone in Flint would vote for him anyway.

[contextly_sidebar id="tcy8DrdIXaG704DBU9SE1wJDjtVPyff2"]While campaigning in Coralville, Iowa, Rubio was asked by a Detroit reporter to comment on Democrats who've criticized Republican Gov. Rick Snyder's handling of the Flint water crisis. Rubio admitted he wasn't up on the story: “I didn’t watch the debate so I have no idea what they said,” he replied.

Rubio also didn't want to venture an opinion about Flint's water problems or how Snyder was dealing with them; he doesn't know nothing 'bout poisonin' no water, but he is at least fairly sure the federal government can only make matters worse, because limited government and stuff:

“That’s not an issue that right now we’ve been focused on and for me to give you a deeply detailed answer on what the right approach should be on it, other than to tell you in general I believe that the federal government’s role in some of these things is largely limited unless it involves a federal jurisdictional issue,” Rubio said.

Comes right down to it, a city of 99,000 people, whose water is poisoning its children with neurotoxins -- and where President Obama has declared a state of emergency -- simply hasn't been on Rubio's radar:

So, I’d love to give you a better answer on it, it’s just not an issue we’ve been quite frankly fully briefed or apprised of, in terms of the role the governor has played and the state has played in Michigan on these sorts of issues.

Perhaps you had a question about taking out radical Islamic terrorists, or it's a terrible thing that Barack Obama negotiated the release of American prisoners from Iran?

Happily, the right has found the real reason things went to hell in Flint: Democrats. The National Review released a toxic spill of corrosive stupidity all over the internet Friday, in the form of a Kevin D. Williamson piece explaining that Flint is just loaded to the gills with Democrats, so of course that's why its water is full of lead. Here's his synopsis of the water crisis:

The city, in an attempt to save money, planned to stop buying water from Detroit and sign up with a regional water system; in the interim, it was getting its municipal water from the Flint River, which is as much a garbage dump as it is a body of water. Residents complained that the water smells of chemicals, that it isn’t the right color, etc. Children’s lead levels are dangerously high, and an outbreak of Legionnaires’ disease may also be linked to city water. The city knew about this, and did approximately nothing in response until the problem was well advanced.

A word that is curiously scarce in coverage of this disaster: Democrat.

You see, kids, Democrats have long run Flint, which is why things are terrible there. To come to this conclusion, Williamson had to ignore one or two details, like how the emergency manager system that took control away from Flint's elected officials was implemented by Republican Gov. Rick Snyder, whose name literally never appears in the piece. Really, go look. He's not mentioned by name. You might also want to check the timelines of the crisis by Michigan Public Radio and MLive.com, which give a rather more complete view of the clusterflush than merely whining about the perfidy of Democrats.

Williamson lays the blame for Flint's leaded-water emergency on Democrat Darnell Earley, who was Flint's emergency manager at the time of the city's switchover from Lake Huron water bought from Detroit to water from the Flint River, which was so corrosive that it caused lead to leach from old solder in the city's water system. Says Williamson, who's clearly done his research:

Earley is the Democrat the other Democrats blame for changing the city’s water supply, and the Michigan Democratic party has demanded his termination.

Now, you might get the impression that Michigan Democrats want Earley fired from the position of Flint emergency manager, which would take some doing, since he left that job in January 2015. Michigan Dems actually want him fired as emergency manager of Detroit's public schools, which was the next mission Snyder sent him on. It's also worth mentioning that Flint has had several emergency managers besides Earley -- all appointed by Gov. Snyder, and all of whom overruled local government efforts to do something about the putrid water -- but hey, he was the Democrat, so let's blame him.

Another whopper in Williamson's piece is the suggestion that the Obama administration was complicit in creating and then ignoring Flint's water emergency:

The Obama administration knew about this, too, and had known for a long time, since February of last year at least — but it chose to keep quiet on the matter.

Funny thing about including web links like that. What you actually find at the link is a Detroit News article that does indeed show that the top EPA official for the Midwest (who we bet seldom gets much face time in the Oval Office) was aware that Flint wasn't treating the river water to prevent corrosion ... and that she spent most of 2015 fighting to convince Michigan's state Department of Environmental Quality that the river water needed to be treated to prevent exactly what happened. That's not a cover-up, that's a federal regulator trying to get a state bureaucracy to do its damned job. Still the headline was "EPA stayed silent on Flint’s tainted water," so maybe Williamson never got any farther than that, which was all the proof he needed.

The rest of Williamson's piece is a catalog of perceived Democrat malfeasance in other cities, which somehow proves that Democrats screwed up Flint's water. Not a word about how the Snyder administration repeatedly ignored evidence that Flint's water was full of lead, because that's not the point. The point is that Democrats wreck cities since they're bad managers, a pretty impressive feat, considering that the emergency manager scheme actually stripped Flint's elected Democrats of any authority.

But let's end this parade of sadness by highlighting some efforts to actually help. There's a GoFundMe site that's attempting to raise money to buy clean water for Flint -- it's hit a bit over $7000 of its modest $10,000 goal in one day. We wish it were doing better; perhaps the organizers could loudly refuse to hydrate any gay weddings, and then money would really come flowing in.

Also, the Muslim community in nearby Dearborn has donated over 30,000 bottles of water for Flint, an act of decency and humanity that helps us hate damned idiot humanity a little less. We can hardly wait to see what the wingnut ParanoiaSphere does with that story -- demand the water be dumped since it might turn unsuspecting thirsty children into sharia-addled water addicts? You don't even know what kind of creepy Muslim prayers might have been chanted over that water!