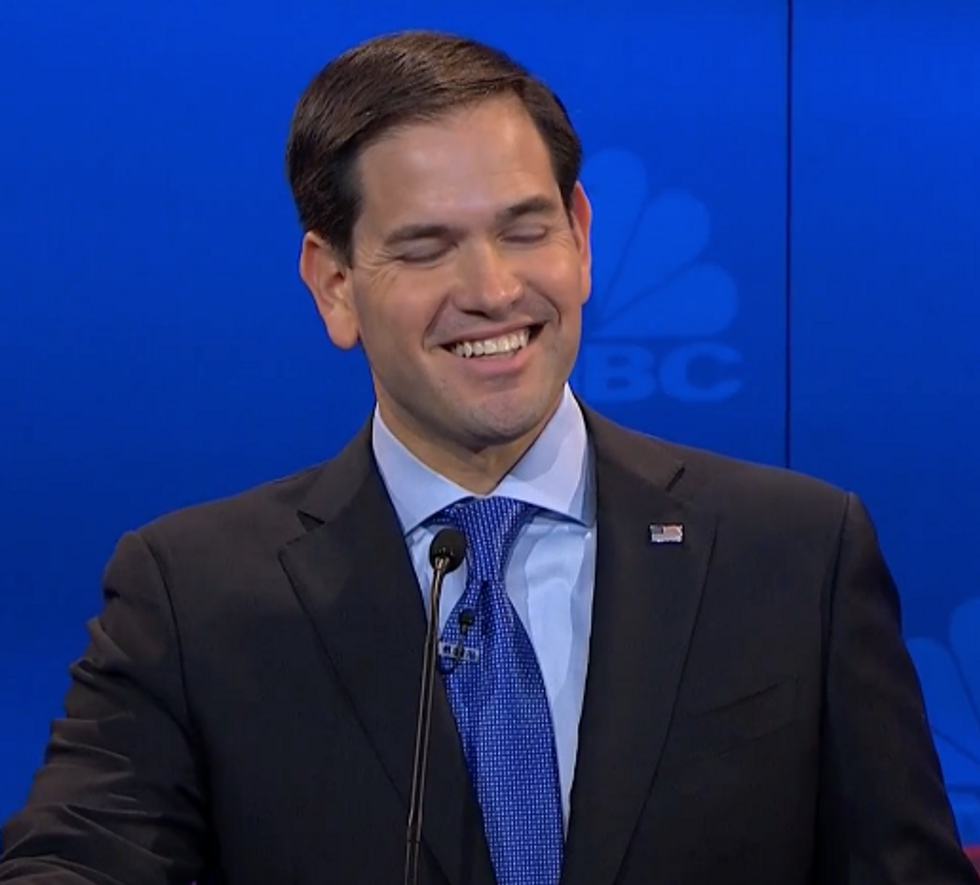 Sucks to be not him!

Florida's senator-in-name-only is so bad at all the things. That's why no one thinks Marco Rubio is going to be president (except for morons on Team Jeb, who believe Rubio is just like Obama, and will thus be a two-term president).

As a state legislator, Marco Rubio helped create the the embarrassingly failtastic Obamacare alternative, to provide crappy coverage to very few people, while costing a ton of money. Bravo, Rubio! As a United States senator, Rubio quickly concluded being a United States senator sucks, so he decided to bail on that double-quick, while still receiving a paycheck, to aim straight for livin' it up in the White House. And as "president," Rubio has vowed to get rid of Obamacare and replace it with tax cuts, but with some other name, to be determined. Can't say we blame him, since Obamacare has been pretty swellerific for the senator and his family:

Rubio's campaign confirmed to NBC News that the GOP presidential candidate and his family remain insured under the law, through the D.C. exchange. He first signed up in 2013, at which point spokeswoman Brooke Sammon told the Tampa Bay Times that Rubio "spent time looking at all the options and decided to enroll through the D.C. exchange for coverage for him and his family."

Of course enrolling in the exchange was the best option for Rubio and his family. Duh. It is the best option for many Americans who would not otherwise have health insurance at all, THANKS OBAMA. It's an extra-special good deal for Rubio, though, because unlike many of us poor saps who don't pretend to work for the Senate, he gets a nice fat subsidy from his employer (that would be us, YOU'RE WELCOME RUBIO):

The Florida senator, however, benefits from a taxpayer-funded subsidy offered only to members of Congress and their staff valued at $10,000, far greater than the subsidies offered to most Americans who purchase insurance on the exchanges.

But didn't Congress get all smart-alecky and "Oh yeah, we'll see about THAT!" and make a dumb law requiring congressjerks to enroll in the exchange, to prove how terrible it is? No. Members always have the option of doing what True Man of Principles Ted Cruz did: refusing the employer subsidy and paying for a private non-exchange plan out of his own pocket.

See, Cruz thinks Obamacare is so the worst that Americans are better off having jack diddly nothin', and while he considered enrolling his family in the exchange, he ultimately decided to put his wife's money where his mouth is. As opposed to Rubio, who also thinks Obamacare is SO the worst, and he's braggin' and a-boastin' about how hard he's worked (yeah, uh huh) to kill it dead -- but until then, well, hey man, it is​ the best option for his family. Possibly for your family too, but once Rubio is president, Obamacare will be dead, and you and your family can fuck right off.

Lucky for you and your family -- and Rubio and his family too, since he's going to be unemployed and not president in about a year -- that's not gonna happen.