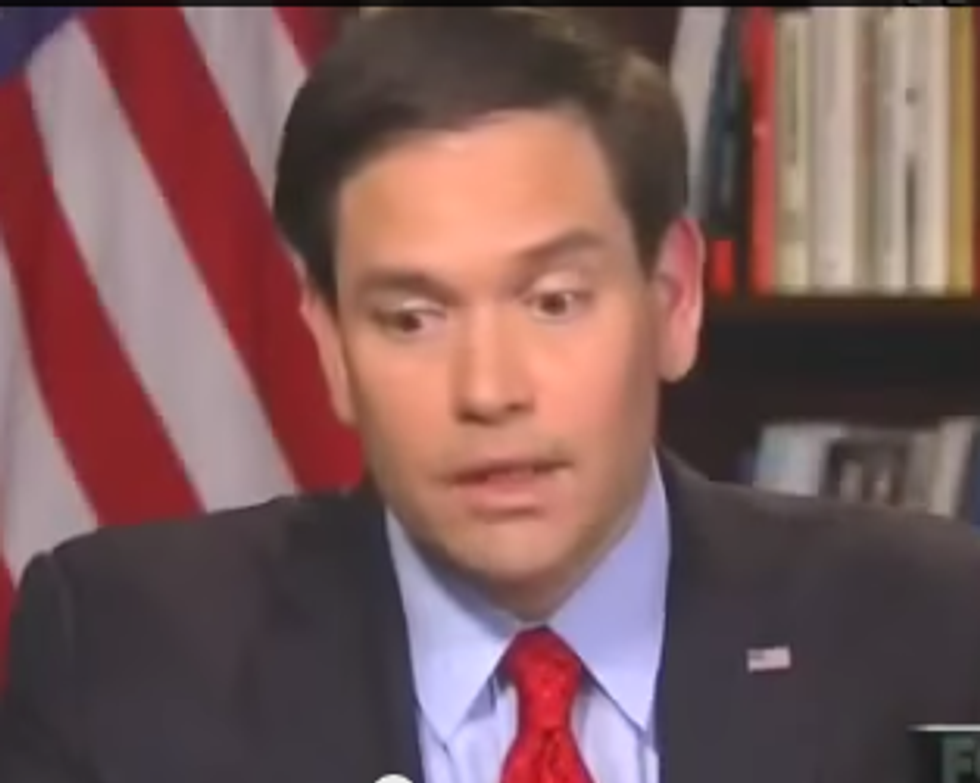 La di da and fiddle dee dee, who knew Miss Marco Rubio was such a delicate little flower? But he is, it turns out, because while sitting on the Stupid Sofa of Stupid on "Fox & Friends," the soon-to-be-unemployed senator from Florida pearl-clutched so hard about just how Not Classy the president is. Why? you may ask, as if it's not obvious. Well! Did you know the president went on "The Daily Show" -- which, Rubio will have you know, is a "comedy show" -- where he made light of "something as serious as Iran"? It is true! Here is the president, casually and unseriously talking about Iran, how dare he, so uncouth!

When you hear the critics talk about, well, it's a bad deal, we could have gotten a better deal -- you then ask them, well, what represents a better deal? What is it that you think could happen? Typically, they're vague, and they fall back on, well, if you had beat your chest a little bit more, or if you'd brought Dick Cheney into the negotiations.

Oh my! Oh no! Tell us, Marco Emily Post Rubio, what is the matter with that?

Number one, that's just flat out untrue. And number two, it shows such little class. I mean, what does Dick Cheney -- what does that have to do with anything that's going on?

Yes, whatever does Dick Cheney have to do with Republicans' criticism of President Obama's foreign policy? Gee, we wonder:

A day before President Obama addresses the nation on his plan for dealing with the crisis in Iraq and Syria, a vast majority of the more than 100 House Republicans who streamed out of the breakfast session called for aggressive action to be taken, and cast Cheney as the party’s wise man.

Furthermore, Rubio will have you know that Iran -- unlike, say, those pesky missing weapons of mass destruction that are definitely not under the desk in the Oval Office -- is "a serious issue" and "there's nothing funny about that." How dare the president make light of such a serious subject! On a COMEDY SHOW!

Hey, remember when His Royal Highness Saint Ronald Reagan joked about outlawing Russia? Nah, probably not. here ya go! Clearly, Reagan did not understand the Very Serious Seriousness of that whole Russia thing:

My fellow Americans, I'm pleased to tell you today that I've signed legislation that will outlaw Russia forever. We begin bombing in five minutes.

Man, if only Rubio had been alive at the time to tell President Reagan just how unclassy and undignified it is to make jokes about nuclear war. Oh well. He could have taught that No Class Reagan or thing or three.

To conduct the presidency, it has to be done in a dignified way, with a level of class. [...] I don't think the way of his behavior over the last few weeks is either dignified or worthy of the office that he seeks. We already have a president now that has no class.

Oh yes, because of that whole comedy show thing? Right, plus, the president "does selfie stick videos." The horror! What would Miss Manners say?

It is important for us to have a presidency that restores dignity and class to the White House, and I don't believe that some of the language that Mr. Trump is employing is worthy of the office.

We'll set aside Rubio's attacks on Trump's classiness, which are tough but fair, though we're sure Trump would insist he's got gold-plated class comin' right out of his butt. Let's go straight to choking on our own vomit at Rubio's casual claim that the president -- we are talking about President Obama, here -- has demeaned his office with his lack of "class." Really? How? By being Barack Obama? By being a Democrat? By being smarter than Marco Rubio? By being bla  -- oh, you know, and you Republican primary voters out there know too, don't you? Nudge nudge.

But sure, the president's a real unrefined hick, and prim and proper Rubio can restore dignity and class to the office, eh? How's that? With some gay-hatin' and demon-wrasslin' maybe, like he does at his church? Making up a riveting but not exactly true story about his family escaping that thug Castro, before he came to power? Telling tall tales is classy, isn't it? Or, here's an idea! Marco Rubio could proudly fly the Confederate flag all over America, given his opposition to its removal, back when he was a state legislator in Florida. That is classy as fuck, yo.

Or, wait, here's an another idea. To paraphrase our former very classy vice president Dick Cheney, Marco Rubio could go fuck himself.