Marco Rubio YA BURNT By A Bunch Of #Teens, And We Are HERE FOR IT 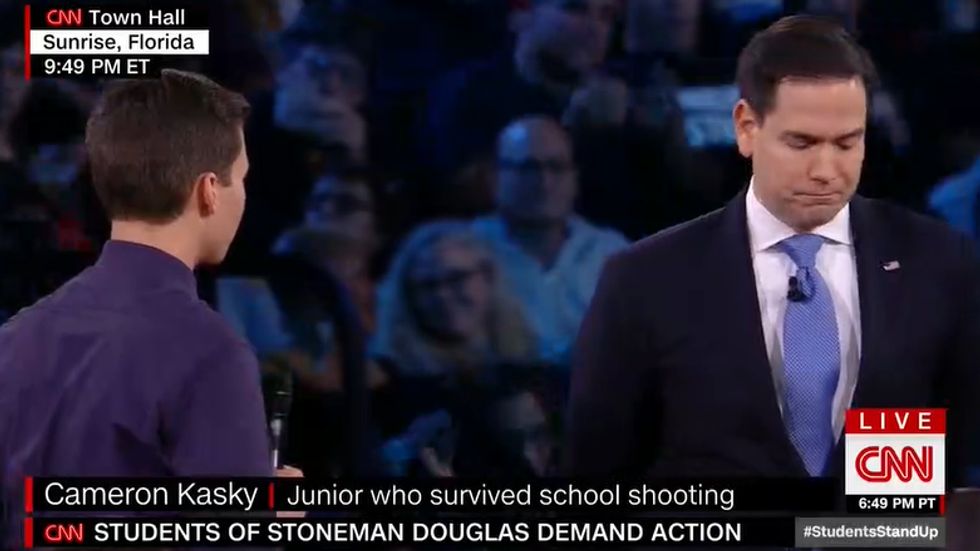 Sorry about everything, Marco Rubio, but you deserve it.

A lot of people are giving Senator Marco Rubio credit just for showing up last night to the CNN town hall on gun violence in Sunrise, Florida. We have no such sentiment for him, as he is the GOP senator from Florida and it is his job to engage with his constituents, even when it is hard and kids laugh at him like the dumb Little Marco he is. We do give him credit, though, for not running away the 5th or the 9th time Cameron Kasky, a high school junior and survivor of the mass shooting terror attack at Marjory Stoneman Douglas High School, dunked on him and made him cry. That required some testicular fortitude!

Rubio did slightly change his mind about a couple of gun things, which is notable considering how he has an A+ grade from the NRA. Over the course of the event, he said maybe we shouldn't arm teachers and maybe we should restrict semi-auto gun sales to people over 21 and maybe we should restrict magazine size, because maybe if we did those things, a few of the people in Parkland might not have died. Marco Rubio will get mass shootings down to the "only 12 or 13 murdered" level, that's his campaign platform, and the NRA has informed him he's STICKIN' TO IT.

We're not going to attempt to give you every insane/crazy/amazing exchange from the town hall, which for some reason also featured NRA spokes-shouty person Dana Loesch, who showed up late and was useless the entire time she was there. But there were some big moments, starting with this one everyone is talking about, when Kasky laid Marco Rubio on his ass and roasted him on a spit for refusing to say he would stop taking NRA money. In the process, he also got in a delicious dig at that asshole Dana Loesch:

KASKY: Senator Rubio, it's hard to look at you and not look down the barrel of an AR-15 and not look at Nikolas Cruz ...

THAT WAS KASKY'S OPENING REMARK. He continued by saying it doesn't matter whether you're a Democrat or a Republican, all that matters is whether you're a person who wants to fix it, or a person who "prefer[s] money," so in that spirit, "Can you tell me right now that you will not accept a single donation from the NRA in the future?" The crowd lost it cheering, which gave Rubio a chance to avoid answering. He continued to avoid answering when Kasky added:

KASKY: I wish I could have asked the NRA lady a question ... because I would ask her how she can look in the mirror, considering the fact she has children, but maybe she avoids those.

OH MY GOD HE CALLED HER A VAMPIRE. Can we just go ahead and elect this kid president, or at least a state senator or something?

Rubio finally "answered" with a bunch of horseshit about how when he takes money from people and gun terrorist organizations, it's because they want to "buy into my agenda." So we guess the NRA is taking cues from Marco Rubio! Is that what he's saying? Because that's what we heard.

KASKY: In the name of 17 people, you cannot ask the NRA to keep their money out of your campaign?

Here is dad Fred Guttenberg, whose child was murdered last week in the gun terrorist attack. He had some choice words for his bloody-handed NRA senator, as well!

GUTTENBERG: Your comments this week and those of our president have been pathetically weak. [...] Look at me and tell me: Guns were the factor in the hunting of our kids in this school this week, and look at me and tell me you accept it and you will work with us to do something about guns.

Nah. Marco Rubio says nah. Rubio will only support a few tiny things he thinks he can get away with without getting an NRA spanking. Go on, Mr. Guttenberg:

GUTTENBERG: Senator Rubio, MY DAUGHTER, running down the hallway at Marjory Stoneman Douglas, was shot in the back with an assault weapon, the weapon of choice, OK? It is too easy to get. It is a weapon of war. The fact that you can't stand with everybody else in this building and SAY THAT? I'm sorry.

Nah. Marco Rubio couldn't say that. He instead got into the weeds about the problems with the so-called "assault weapons ban," doing that deflection thing gun nuts do where they say ACTUALLY that ban isn't good because it doesn't ban ALL the semi-automatic guns, therefore let's not ban ANY of them, because that particular law is written badly. But is Rubio willing to start with the flawed ban, and then work toward banning all of the semi-automatic weapons, asked the father? Nah. Marco Rubio says nah.

Of course, Rubio's argument kind of fucked him when he got upset at the prospect of banning all semi-auto weapons, and the crowd, who just went through a mass shooting, was like "YES LET'S DO THAT, ASSHOLE." Rubio stated, "My colleagues do not support banning every semi-automatic rifle in America," and then begged Democratic Congressman Ted Deutch to agree with him:

Rubio: “Are you in favor of banning any gun that can do what the AR-15 can do?”

Deutsch: Do I support banning “weapons of war that serve no purpose other than killing the maximum number of people they can? You bet I am”#StudentsStandUphttps://t.co/bIDrb7NKm2

RUBIO: Are you in favor of banning any gun that can do what the AR-15 can do? Yes or no?

DEUTCH: [...] Do I support banning weapons that fire off 150 rounds in 7 or 8 minutes, weapons that are weapons of war, that serve no purpose but killing the maximum number of people they can, YOU BET I AM!

Oh, but he was not done! Israel went through a litany of things that need to be changed that don't involve guns, giving Dana Loesch an opportunity to nod along like "that's right!" and "you betcha!" Then he crescendoed to his climax:

And this was Dana Loesch's face.

And here is Cameron Kasky's review of Dana Loesch:

OH MY GOD HE CALLED HER A VAMPIRE AGAIN.

Finally, here is Robert Runcie, superintendent of the school district that contains Marjory Stoneman Douglas High School. He is not here for thoughts 'n' prayers. He is also not here for Donald Trump's stupid ignorant desire to arm teachers:

RUNCIE: To our teachers at Stoneman Douglas, you work so tirelessly. You love the students as your own babies. And some of the dialogue that I've heard recently is about arming teachers. We don't need to put guns in the hands of teachers. You know what we need? We need to arm our teachers with more money in their pocket! This country pays a lot of lip service to the importance of the teaching profession, but we don't put our money behind it.

In other words, SUCK IT, TRUMP.

We could keep going with this post forever, but let's just close by saying Cameron Kasky is the boss of you now, and so are all the rest of the kids of Stoneman Douglas.