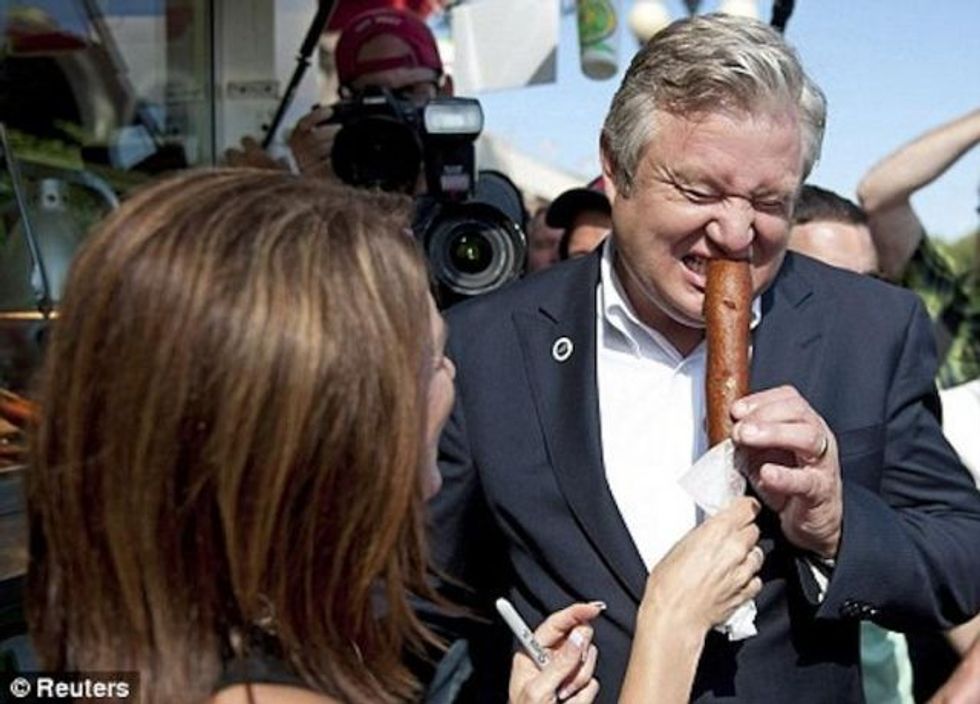 We know, we know. You're chock full of Michele Bachmann derp. Couldn't eat another bite, really. But have you noshed on any nonsense from Marcus Bachmann lately? Yes, the gentler more feminine half of the Bachmann marriage gets overshadowed by his crazy-eyed wife so often, but sometimes he needs to step forth into the spotlight and burst into flame, or song, or both.

Marcus took his deeply closeted carcass over to a Minnesota Christian radio station, KKMS, to talk about how cool it is to be ex-gay. His appearance followed that of David Hall, the leader of Minnesota's holdout sad panda ex-gay group Outpost Ministries, which somehow is still chugging along even though its big brother in the ex-gay movement, Exodus, long ago gave up the ghost on that. A doubleheader of loathing and self-loathing! Riveting radio!

First, Marcus had to give David Hall a tongue-bath for sharing his penchant for helping gays hate themselves into being not gay anymore.

The fact is — and we get this at our Christian counseling clinic — the fact is that there is a real movement to be against people who are deciding they’re not satisfied with a lifestyle that’s not fulfilling for them and if they want to change from their same-sex attraction there should be no hinderance from a counseling perspective to stop them [...] I think it’s an arena that I applaud David Hall for his stand and also for his organization.

You can practically hear the whining Marcus is engaging in here, worrying that his poor poor beleaguered clinic might ever be hamstrung from shaming people into a lifetime of ex-gay unhappiness. Oh, and and don't forget explaining that gay people have mental health issues because of how deeply they don't want to be gay, not because they have people like Marcus Bachmann reproaching and concern trolling them 24/7.

We are — just like David talked about — we’re not out to force, manipulate, pressure. We are there to walk alongside and someone who has had this battle, we recognize that for so many of them they have kept it in secret. They have struggled with their emotions. There is high statistics regarding the mental health issues that people have struggled with being in same-sex attraction.

Marcus went on to explain that he does not engage in reparative therapy, mainly because people say mean things about reparative therapy and therefore that is not what Marcus does, because his therapy just happens to repair your broken gayness, but does so with loving Christian kindness or something.

Seriously, how is this still a business model? Like, no one else goes to Marcus Bachmann for regular old "I feel depressed" or "Can you refer me to a doctor that will prescribe Valium, please?" types of therapy, right? And many people who struggle with not wanting to be gay, we assume, may seek out their priest or confessor or what-the-fuck-ever. And the (hopefully) small slice of people left over end up at Marcus's place. So we're betting that the "none dare call it reparative" therapy that Marcus engages in must be a sort of continual cycle, where you're never quite fully cured of your big old gayness, and you have to buy like a 20-pack of anti-gay humiliation from Marcus every few months or so. Nice work if you can get it, and by "nice" we mean "soul-destroying, and shame on you Marcus."

Hopefully his referrals will just dry up once his wife leaves the national stage. Or maybe they'll get that divorce that's just got to be inevitable, right? God, we hope so, because you know those divorce papers will be AMAZING. We'll pray for that.