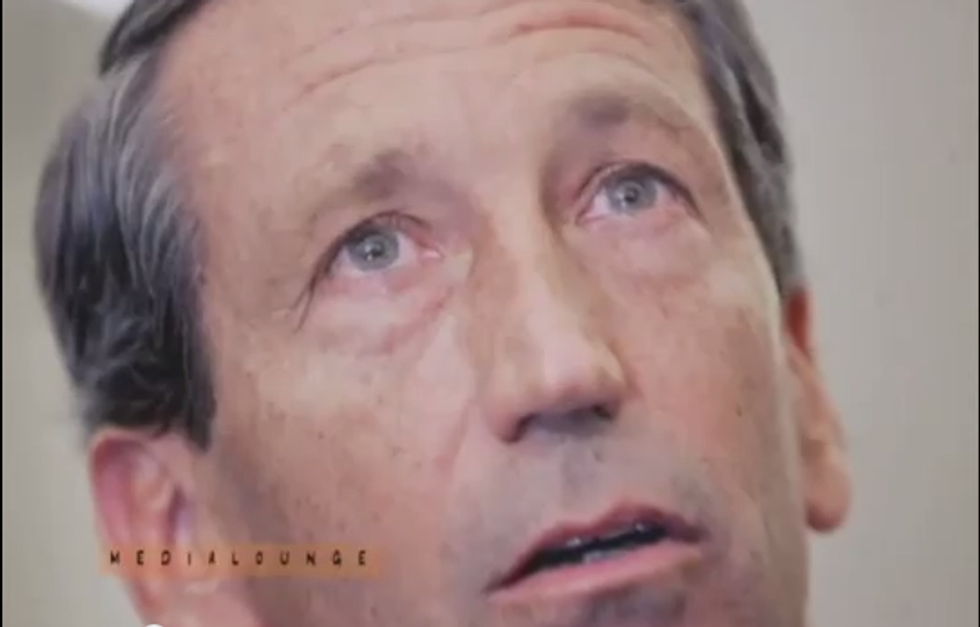 In case you missed it, which is impossible because no one missed it, Rep. Mark Sanford (R-Tragicville) felt compelled on Friday to share all of his personal turmoil on his Facebook page. All 2000-plus words of it, which we conveniently summarized for you, you're welcome.

Since Friday, there have been many new developments in the never-ending soap opera that is The Sanford Saga, including our very own Wonkette EXCLUSIVE report on some seriously sad and sleazy details of the Sanfords' divorce, revealed in a 79-page court hearing transcript, which we obtained and read and summarized for you, you're welcome again.

While Mark Sanford probably definitely should stop pouring his heart out on the internet, or at all, he just doesn't know how to quit you, Facebook. On the eve of yet another family court hearing with his ex-wife -- who is now accusing him of being a drunken rage-aholic in need of psychological evaluation, and at this point, we're sort of inclined to agree with her on the latter -- Mark once again felt the need to share his "thoughts":

Stepping back from my post of a few days ago let me again apologize for going into the iterations of court actions on the personal sphere. I simply felt I had to give some account given accusations were made that raised questions about substance abuse and more, and I felt compelled to offer some context into the nature of their timing. As I said in that post, you can’t please everyone with what you say and so understandably some of you applauded what I had to say while others didn’t want to hear of these details.

Accordingly, I move forward to the events of this week.

Not only is he sorry -- he's sorry for being sorry. But he just could not help himself, which is a recurring problem he seems to have cough Argentina cough cough. Anyway, now that he's put yet another apology out there, forward to the events of the week! And no, he is not referring to his Monday court appearance where to face off yet again with Jenny The Ex about whether he is a danger to his youngest son and probably shouldn't get to spend time with him. We sort of wonder that ourselves, considering what we learned and revealed in our EXCLUSIVE report, again you're welcome again: like how danger is part of the "fun" at Coosaw Plantation, the Sanford family farm, where four-year-olds play with guns and "crazy cousin" John plays "chicken" by flying an actual passenger airplane at the Sanford kids, and, oh yes, TWO children drowned on the property.

The Monday hearing itself was disappointingly not newsworthy; Mark and Jenny agreed to go to mediation to resolve their differences about whether Mark is in fact the worst father in the world, which is common practice in legal disputes, and good for them for trying to be civil about it.

But that's not what Mark was talking about in his latest inelegant outpouring of his confused heart.

One, I don’t think there is an issue of greater consequence that is debated by Congress than war. In it hangs the balance between life and death for soldiers and civilians alike affected within war territories. In it hang implications for allies around the world in the way that they interpret what we do and don’t do. And in it hangs far reaching financial considerations because war is of great cost both in human and financial terms.

Is that deeper than one of Mark's "digging holes" or what? War, man. Like, wow. His poorly punctuated stream of consciousness goes on ... and on ... and on ... until he decides "accordingly" that he "will push very hard with democratic and republican colleagues alike for a free standing vote, because if this issue is worthy of funding and support…it is worthy of debate and a free standing vote." (Those ellipses, by the way, are Mark's. You can almost hear the hamster wheel in his head creaking as he types ... and thinks ... and types ... and cries about his recently ended affair ... and eats some ice cream ... and sings "I Will Survive" to himself.)

And then some more thoughts hit him:

The other thing that hit me was the fact that the President really does need to come and ask Congress to sanction this war effort. I have been consistent in my belief that only Congress can declare war, and Section Eight of the Constitution says it in unequivocally clear terms. [...] I will not vote to support a war effort without Congress’s sanction, and we would be very wise to return to what the founding fathers envisioned here.

I will not vote to support a war effort without Congress’s sanction.

Yeah, that's what he said, all right. In other words, this constitutional scholar, who quotes James Wilson and George Washington so he is definitely an expert, will not vote for war in Congress unless Congress votes for war. If we may be so presumptuous as to quote ourselves (and of course we may, whatcha gonna do about it?), "As to whether he's stupid, there’s a strong argument to be made in that respect as well."

We're pretty sure we just won that argument. And that someone should probably take Mark's internet away from him.