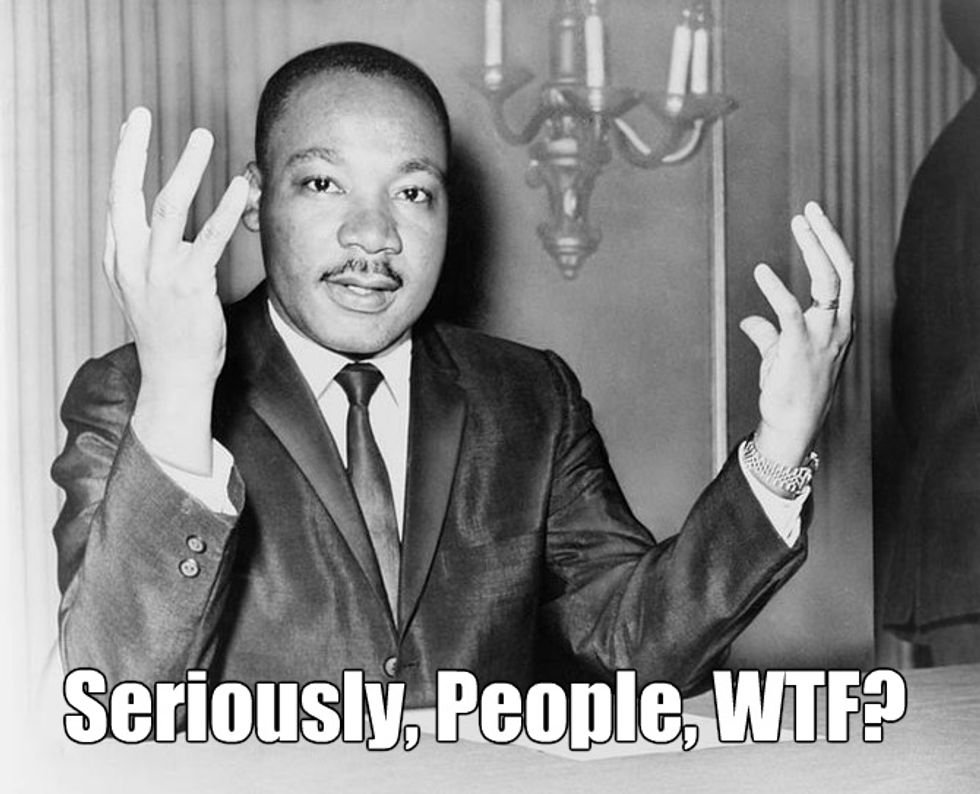 It's Martin Luther King Day (his actual birthday was last Thursday), which means it's time for that weird annual ritual where people who oppose almost everything he stood for in life claim that King is absolutely, positively one of their greatest heroes, and that were he here today, he'd surely support their libertarian, small-government, guns-everywhere, fuck-the-poor, end affirmative action, America for Americans, pass Voter ID, and Freedom For All God's Corporate Children agendas. After all, Martin Luther King once gave a speech at the Lincoln Memorial, which consisted of a single line about how he dreamed that one day people would be judged not by the color of their skin but by the content of their character, and then he sat down, having said all there was to say on the matter.

“But when we look at what’s going on in America today, it’s pretty easy to see that Dr. King’s dream got hijacked,” Finley continued. “I believe racism in this country would’ve died out a long time ago, except that some people figured out that racism can be very profitable -- both financially and politically.”

Finley went on to explain that "the left have mastered the art of turning every issue into a skin-color issue, character be damned," and that "manufactured racism," which apparently is much less healthy than the organic free range kind, has been used as a weapon against teabaggers.

Finley added, "There’s no doubt in my mind that if Martin Luther King Jr. was alive today the liberal left would spit in his face because he would be such a threat to their political agendas.” This is probably true, since King constantly talked about the sanctity of the free market, told poor people to stop being lazy and go get a job, hated unions, and loved our great military unreservedly as the greatest force for freedom in the world.

Mr. Finley also "officially" announced that from this day forward,

the Tea Party is taking Martin Luther King away from the liberal left. And to you race-baiting promoters of division and hatred, you’re not getting him back until you renounce your shameful skin-color politics and start practicing the politics of character.

Presumably, one of Mr. Finley's first tasks will be to redact all references to race from the collected works of Martin Luther King, who made a point of never talking about race.

For anyone who can stomach it, here's the video of Mr. Finley's remarks, which end with a prediction that his adoption of King will result in liberals screaming in outrage, and predicting that those in the hall who step outside will "hear a strange sound -- kinda like chimpanzees." The joke was met with howls of non-racist laughter, because Wild Bill's just funnin', without a single racist bone in his head. And it's not racist, because people drew Bush as a monkey. (skip forward to about the 18:20 for the MLK stuff)

Over at Bradlee Dean's Emporium of Stupid, we have a piece by a Jesse Lee Petersen that examines the evidence that Martin Luther King's dream has "gone off the rails." Exhibit One: A lot of black people inexplicably like Al Sharpton. See if there's anything notable about how Petersen frames this bit of polling data:

The fact is, the average American can’t stomach the pompous race hustler. According to a recent Fox News poll, only 19 percent of Americans have a favorable opinion of Sharpton. Yet among blacks, he has a 56 percent favorable rating! What’s going on here?

You got your Americans, and you got your blacks. And Martin Luther King would surely have stood with Americans on this one. Also, MLK would have condemned Oprah Winfrey for saying that racism in the south would probably be with us until a lot of old racists in the South died, which means that she wants to murder them, and since King only wanted people judged by the content of their character, he too would be disgusted by Winfrey.

Also, too, the principle of nonviolence has been betrayed by everyone who has "sided with black law-breaking thugs against police," a tragedy that led to the murder of two policemen in New York City. Surely Martin Luther King would be wearing an "I am Darren Wilson" t-shirt, don't you think? Happily, Petersen knows how Martin Luther King's dream can be restored:

If every one of these racists and enemies of America went away tomorrow, it still would not remove the racism that lies in the heart of most black Americans. (Remember, 56 percent of blacks have a favorable opinion of Sharpton and voted twice for Obama in overwhelming numbers.)

No -- the key to achieving Dr. King’s dream is black Americans repenting of their hatred toward white Americans; and if they will not, then no amount of white apologies, shakedown money, or Oscar nominations will restore their souls, or racial tranquility in our nation.

Inspiring, isn't it? It's almost like he's captured the very cadences of King's oratory and the essence of his message: Black people, get your shit together and stop complaining.

Rightwing Christianist gay-hating freak Matt Barber is celebrating King Day with a column explaining how Martin Luther King, as a "Bible-believing Christian minister," would surely agree that America's very existence as a nation is threatened by the gheys, as evidenced by a 1958 advice column King wrote for Ebony magazine. A young man wrote asking what to do about this problem: "I am a boy, but I feel about boys the way I ought to feel about girls. I don’t want my parents to know about me. What can I do?"

King replied that while the boy might believe his attraction to other boys was innate, it was probably "something that has been culturally acquired," and therefore he would need to "deal with this problem by getting back to some of the experiences and circumstances that led to the habit." King recommended that the boy see a psychiatrist who could help him overcome his problem. Says Barber triumphantly,

No amount of leftist spin can muddy Dr. King’s lucid position on the homosexual lifestyle. He recognized it as a “culturally acquired” “problem” in need of a “solution” – a “habit” stemming from a series of negative “experiences and circumstances.”

Heaven knows, no one who thought one thing in 1958 would ever change his mind over the years, although Barber does grudgingly acknowledge that Coretta Scott King " did voice some level of support for the homosexualist political agenda." But this one quote from 1958 proves that Martin Luther King would never ever EVER in a million years ever have changed his mind on the subject of homosexuality, because there it is in print. In fact, Barber explains, any gay rights supporter who claims King as a supporter is in fact a hypocrite, since today they would condemn him as a bigot, stop there, you hypocritical perverts.

Obviously, Barber also cites King's niece Alveda King, who thinks the gay rights movement is a perversion of MLK's legacy, because "the civil rights movement was born from the Bible. God hates homosexuality.” And she knows, too, that her uncle's views never would have changed from 1958, just as no one else's have. We would consider judging Matt Barber for the content of his character, but frankly, we don't even want to examine the dipstick on that sludge tank.

And because history loves ironies, we have this bizarre juxtaposition. In Alabama, Arkansas, and Mississippi, today is not only Martin Luther King Day, it's also Robert E. Lee Day. It's some kind of gesture at reconciliation, we bet. And hey, both men had dreams, so that's what matters.

Twitter has brought us some lovely thoughts for the occasion, too. The National Security Agency sent out this message, apparently without a hint of irony:

We suppose they do have at least a shred of plausible deniability. When King's phone and hotel rooms were wiretapped by the FBI, the NSA really did limit its intelligence-gathering to foreign sources, so its hands were clean as far as King was concerned (and as far as we know).

And finally, a word from a gentleman who really understands what it's like to be out there pushing America toward greater freedom, and who knows a thing or two about oppression, too: confessed election fraudster Dinesh D'Souza tweeted this stirring observation:

Really, the similarities are uncanny! Martin Luther King broke laws against segregation because they were manifestly unjust, and Dinesh D'Souza broke laws against funneling illegal campaign contributions to a candidate because he really wanted that candidate to win. It's almost exactly the same thing! We're looking forward to D'Souza's great essay "Letter From Community Service Along State Highway 41."