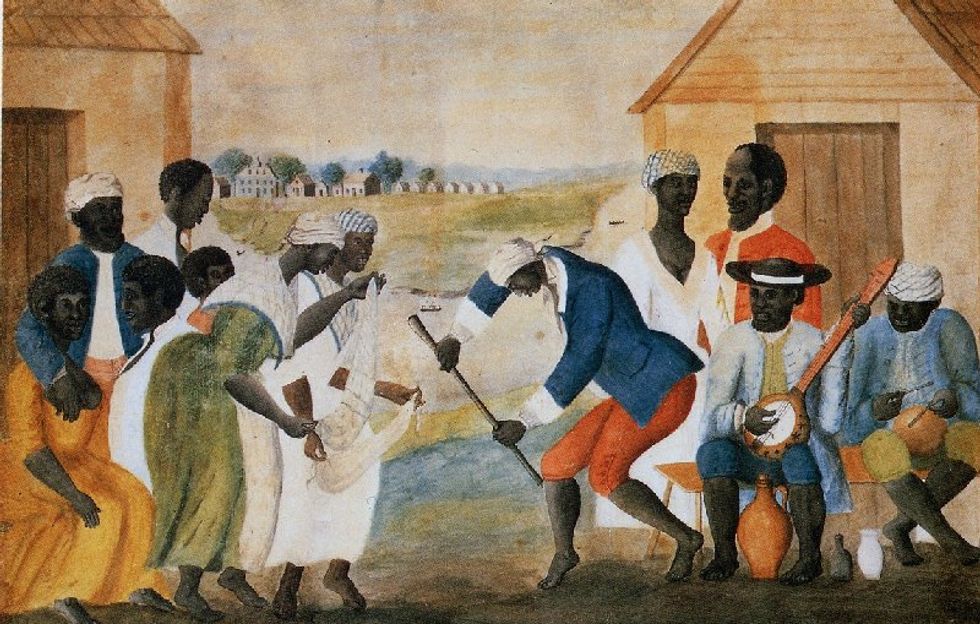 Remember how the Teaheads in Gilbert (Dok's geographic aphasia strikes again), Arizona, are on the cusp of murdering some biology textbooks because the books say that abortion is a thing that exists? Well, it's time for a big ol' "Both Sides Do It!" jamboree, because in Brookline, Massachusetts, some parents are simply livid about a passage in a 5th-grade American History text that says -- and we hope you are sitting down -- that not every slave back in slavery times was horribly mistreated. A local teevee report explains that after parents complained to the local school board, the district announced the book, published in 2001, would be phased out at the end of the year; in the meantime, according to a letter sent to parents, it will not be used in history classes, but rather, the passage will be used to "question the authority of a published book.”

At issue is this passage from the textbook:

Several parents believed that the statement that "slaves were treated well or cruelly depending on their owners. Some planters took pride in being fair and kind to their slaves" was entirely too positive in tone. One gentleman named Brooks Ames said of the passage, “This is what they taught in Reconstruction, after Reconstruction. This is a way of justifying racism.” Another parent, Arthur Wellington Conquest III -- who seems to rival Mr. Ames for Most Thoroughly Brookline Name -- complained that "There's something wrong when we teach our children that there was something good about owning another person. It's sick.”

Thing is, we're having a hard time sharing that outrage, even though we're sympathetic, because 1) It's actually true that while slavery was a monstrous institution, not every slave owner behaved monstrously -- and in fact, the moral contradiction of trying to be a "good" person who owned other human beings is one more reason why slavery was terrible: it corrupted the slaveowner, too; 2) in the very next sentence, the book underscores that there was nothing beyond the individual slaveowner's whim that would determine how slaves were treated:

There was little protection, however, for slaves who had cruel masters. Slave owners were free to beat, whip, or insult any slave as often as they chose to do so.

And of course, maybe our own perspective has been skewed, because 3) We've read textbooks that are quite deliberate in their agenda of downplaying slavery, and here's what REAL whitewashing sounds like, from an 11th/12th-grade text for Christian schools published by Bob Jones University:

Physical treatment of slaves varied. Some slave holders were undeniably cruel. Examples of slaves beaten to death were not common. but neither were they unknown. Much more common was the use of flogging and other physical punishment to ensure obedience. The large majority of slave holders fed their slaves enough to sustain them in their work, housed them well enough to keep them dry, and clothed them well enough to keep them warm. For most owners. this was simply good business; slaves cost too much to mistreat.

Or how about this, from an 8th-grade textbook from Pensacola Christian College?

Although the slaves faced great difficulties, many found faith in Christ and learned to look to God for strength. By 1860, most slave holders provided Christian instruction on their plantations.

Or this, from the same chapter?

To help His children endure the difficulties of slavery, God gave the Christian slaves the ability to spiritually combine the African heritage of song with the dignity and power of Christian praise. Through the Negro spiritual, the slaves developed the patience to wait on the Lord and discovered that the truest freedom is freedom from the bondage of sin. Today, the spiritual is recognized as America’s greatest contribution to the field of music.

And that, Charlie Brown, is the true meaning of downplaying the evils of slavery. Could the passage in the book that Brookline parents object to be improved? Certainly. All it really needs is an additional line or two noting that even "well-treated" slaves were not free, and that they were subject entirely to the whim of the master -- who might die or sell them off to an owner who wasn't so nice. Presumably the replacement texts will include something like that.

Yes, we recognize that "not as bad as something from Bob Jones University Press" isn't an especially high moral bar to clear. And we'll give the Brookline parents credit for not demanding the schools razor out the offending passage. On the whole, it looks like the school district is even using the kerfuffle as a chance to talk about why history matters, and why it isn't simple, so maybe some good will come out of this, even.