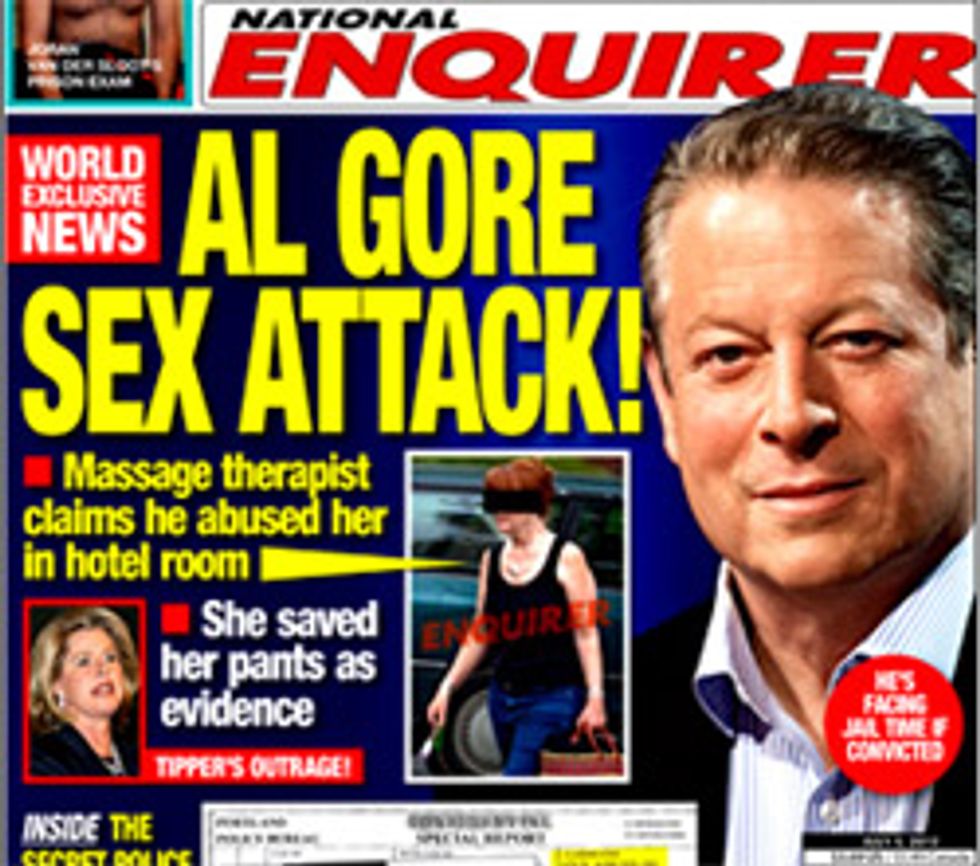 Really? Did Al Gore try to get some 54-year-old masseuse gal to massage his dingus at a Portland hotel where he was staying to give a Climate Change speech, and when the woman showed no interest did he then get angry and demand she have sex with him? Is Al Gore supposed to be the new Kobe Bryant? MAYBE NOT. This was apparently reported and then un-reported to Oregon police back in 2006, and then the woman reportedly refused to meet with the police, twice, and the lawyer canceled meetings with the cops, and then (magically) after Al and Tipper Gore announced they were separating a few weeks ago, this masseuse went back to the police and asked for a copy of her original statement to, of course, give to the National Enquirer.

WHY IS EVERYBODY SO GROSS STOP IT.

From the AP retelling of the police report and the tabloid article:

In a transcript of the interview released by police, the massage therapist said she had an appointment with "Mr. Stone" at 10:30 p.m. but the hotel's front desk told her he wouldn't be available until 11 p.m. When she knocked on the door, Al Gore opened it, and when she asked what she should call him, he replied to "Call me Al," the woman told police.

She said she was doing requested abdominal work on Gore when he started to moan and demanded she go lower.

"I was shocked, and I did not massage beyond what is considered a safe, nonsexual area of the abdomen," she said. "He further insisted and acted angry, becoming verbally sharp and loud.

And now, according to the Enquirer, the Portland DA is supposedly saying there is "the possibility of a criminal prosecution."

But here's the actual statement from the Portland district attorney, in its entirety:

About a year after this event, our office was aware that a public records request from the media regarding this matter had been granted by the Portland Police Bureau.

If there's nothing to this, the Enquirer has lost all the hard-won Journamalism Credibility it got for busting the John Edwards thing open when nobody else would go after it.

Remember that "Obama banged some lady somewhere a few years ago" story that the Enquirer backed off from, a few months ago, after trying to get another John Edwards-style scoop? Two of those in a row will probably mean we don't have to check the Enquirer anymore.

But if there is something to it, then it's just more gross behavior from the super-rich gross people who either rule over the nation or make gazillions telling the nation to stop farting because it is killing the planet. (Those are the talking points for AM radio tomorrow. You're welcome!) [National Enquirer/Salon]