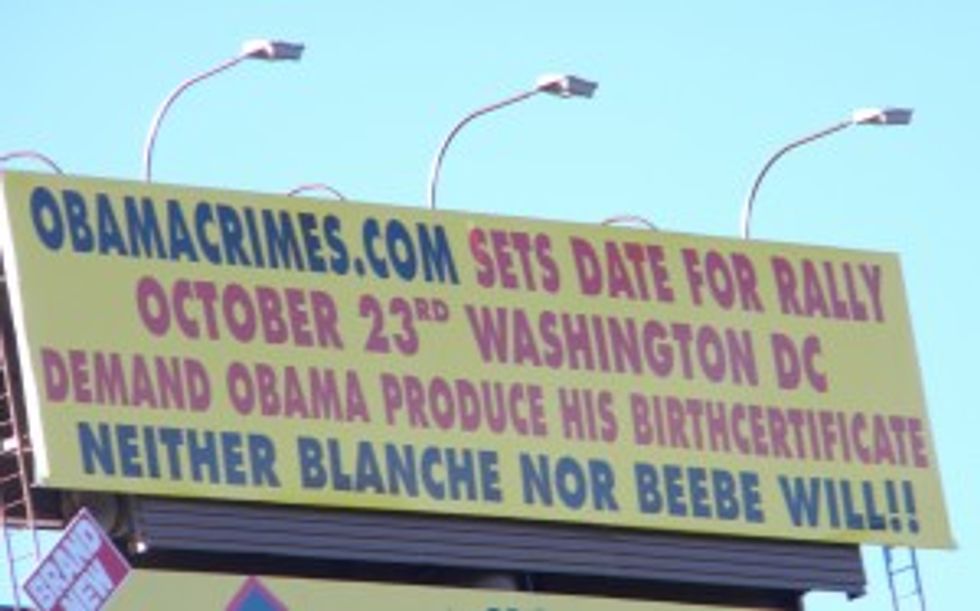 What an inspiring speech! There's birther Phil Berg, leader of this rally, hacking up phlegm and relaying the laundry list of "proof" we all know now by heart that the president was not born in the United States. As Dave Weigel notes, there were "dozens of people" at this thing! That is a really big rally! Actually, Weigel has been the only journalist to cover this event at all, which is a real shame, because pretty soon that fat guy in the back with the Captain America hoodie is going to discover the "smoking gun" of the field of Obama-birth-certificate science, and everyone in the media is going to be really embarrassed for stopping their breathless coverage of these cretins so early in the game.

This rally, which was held at the foot of the Capitol, probably confused foreign tourists into thinking a member of Congress was at the mic presenting some important facts about the president for the first time, and really that's the best you can hope for at a rally on the Mall. After all, you're just shouting to a crowd of like-minded people, whether that's 200,000 followers or 17, so it's best just to scare and/or annoy families trying to visit the Air and Space Museum "for the lolz."

"Is the conspiracy theory about Obama's citizenship fading? No; it's a germ that jumped hosts," Weigel writes. Even if it is faltering, the birther movement will forever live on in all our hearts, a constant reminder of how beautiful this country is.

And it will live on on this dumb billboard in Arkansas these Orly wannabes put up.

In a way, all patriots are friends of Phil Berg. Or at least those who have WOKEN UP to the fact that there is a BLACK GUY in the White House. [Weigel/Obama Crimes/Facebook]