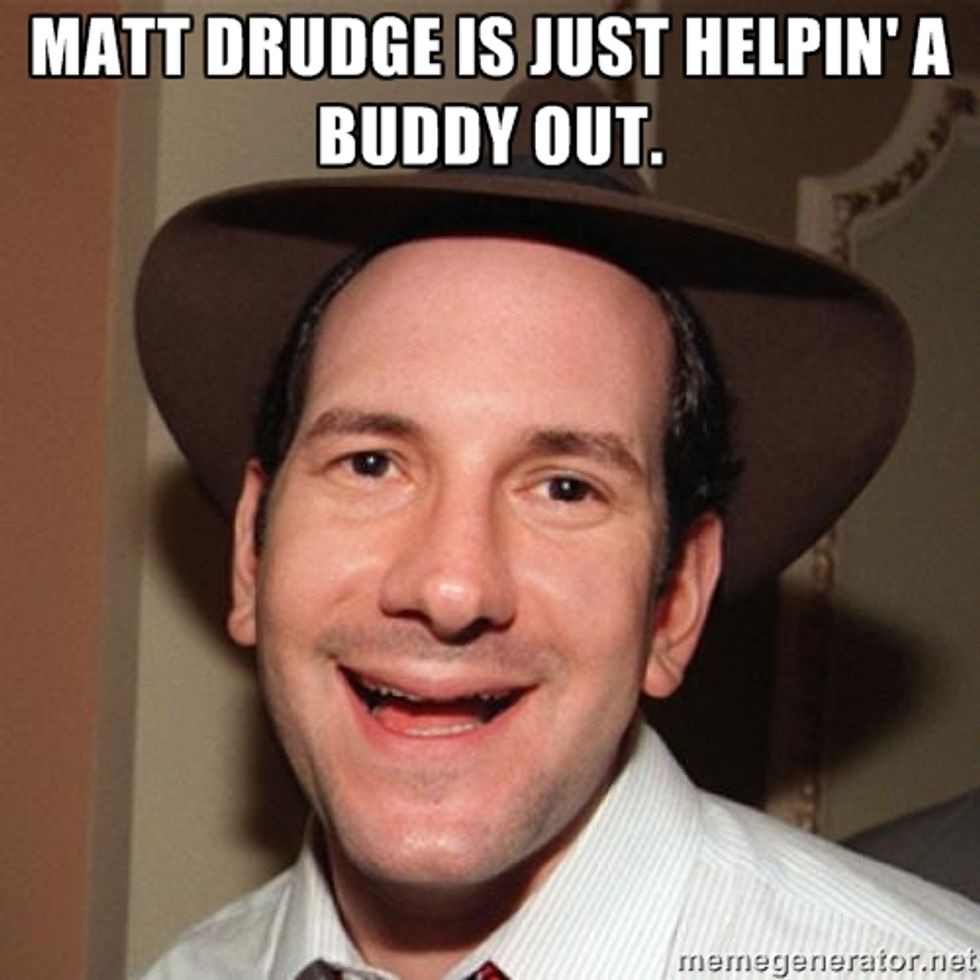 DRUDGE SIRENS AND DISCO BALLS AND CHER SINGING "DO YOU BELIEEEEEVE IN LIFE AFTER LOVE?!" There is a News Item in the News, about Matt Drudge, racist copy/paster for the Drudge Report, who says he is a heterosexual, which makes it so weird how Out Magazine always puts him on its annual list of the top 69 gays who 69 each other on the butt.

Seems Drudge gave his helpin'-a-buddy-out bro, Juan Carlos Alvarado, the 4600 square foot house next door to his, because that's just what you do when you've been living together in the bonds of holy heterosexual bromance for 11 years:

If you believe the quitclaim deed that appeared in records Jan. 15, the founder of The Drudge Report surrendered the property that’s adjacent to his $1.45 million homestead to a man with whom he shared the same addresses for the past 11 years. [...]

Florida state records show Alvarado once held a real estate license and has lived alongside Drudge in a Collins Avenue condo, a $1.57 million house in the Venetian Isles in Miami Beach and, finally, on Southwest 157th Avenue, where Drudge has been assembling land.

Look, here is the quitclaim!

HMMMM! That very clearly says Drudge is A SINGLE MAN and Alvarado is also A SINGLE MAN, which means they must be straight Miami pals like those boys in "The Birdcage."

Let's see if we can figure out what's going on here. Ann Coulter may braid vag hair and talk about boys with Matt Drudge, but yr Wonkette doesn't, so we guess we'll just speculate wildly.

Drudge is (allegedly LOL) a longtime closet case, and according to that quitclaim above, he is not gay married. But maybe he thinks it's a good idea for Mr. Alvarado to own some of the family property, in case anything were to happen? According to property records, the sole owner of both homes before this quitclaim was Drudge, and it was reported in 2013 when he bought the smaller home in question that he was basically turning both properties into one huge compound.

So maybe this is his way of "putting Juan Carlos on the house." Also, since Drudge is a total recluse, even if he gay loves Juan Carlos on the bathing suit area all the time, he might not be able to stomach the idea of sharing the 6334-square foot Main Residence with him, because get out of his face is why.

As we said, these two naked gaybirds are not actually married. But MAYBE Matt and Juan have called splitsies after 11 years, but for the good of the fedora collection and the cats, they've decided to live next door to each other amicably. See, quitclaims are a very easy way for one person to relinquish the deed on a property to another person, with very little bullshit or taxation involved. They are EXTREMELY common in divorces, but sometimes it's just a good way for property to change hands within a fambly. Still though: He might have broked up with Juan Carlos like he broked up with America.

DRUDGE ALERT for Matt Drudge actually being straight all these years, and Juan Carlos Alvarado is seriously just his best friend, and he gave him a house, and all of this is totally normal.