Maureen Dowd Writes A Short Story About Donald Trump, Gets C-Minus In Fiction 101 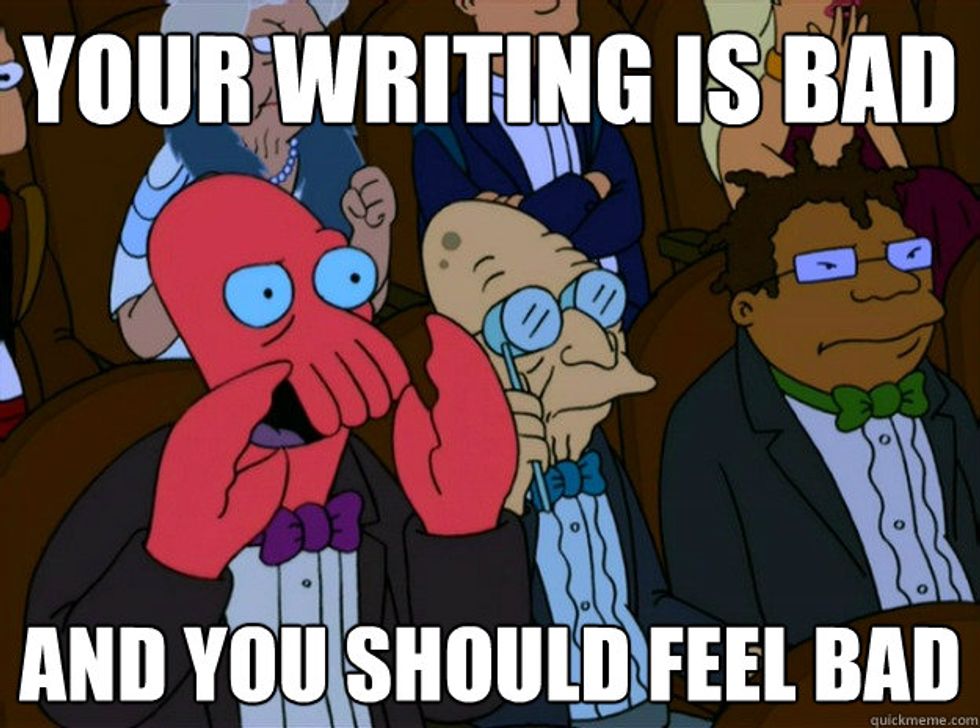 Maureen Dowd has, god help us, tried to be funny again, with a column imagining Donald Trump on Inauguration Day. It's really, really bad, both as a story and as political satire, so you should read it immediately before she comes to her senses and has it sent down the Memory Hole. (We are of course merely joshing. Maureen Dowd probably thinks its brilliant, which is one of the few really compelling arguments in favor of censorship.) Maybe Maureen Dowd figured she'd written so much bad fiction about Hillary Clinton that she felt compelled to write something dumb about Donald Trump, for balance. We'd enjoy seeing it critiqued in an undergraduate creative writing workshop, because it really doesn't feel "earned."

So here's the setup: it's inauguration day, and Donald Trump is sitting in the Oval Office, fuming that Barack Obama didn't leave him the traditional letter of advice from an outgoing president to his successor (Not "his or her," because Hillary lost, lol). Then Trump begins to monologue, and Jesus H. Christ, you'd think if ANYONE has an easily-parodied voice, it's Donald J. Trump, but Dowd's Trump doesn't sound any more like Trump than we sounded like Jimmy Cagney when we were nine years old and imitated Rich Little imitating Jimmy Cagney, see?

“I did it. My way. They said I was a dangerous, insane traitor, a threat to national security, a Siberian candidate in cahoots with Pooty-Poot. That spook for Hillary, Michael Morell, the ex-C.I.A. chief who dished up the flawed intelligence that helped get us into the Iraq war — which I opposed from the beginning, even if I said the opposite — called me ‘an unwitting agent of the Russian Federation.’

“That reminds me, I need to give Vlad a ring today from the hotline and find out what I’m supposed to do now. Just kidding.

“The political elite was in a frenzy about what would happen if I got my short finger on the nuclear button. Where is the button, by the way? Or is it a football? I know football better than anyone. I used to play and even had a team. If I find that football, I’m gonna punt it right at Little Mikie Bloomberg. Talk about a traitor.

Note to Maureen Dowd: Donald Trump doesn't sound like that. He doesn't do complex sentences. He barely does sentences at all. The next time you want some Imitation Trump, just subcontract it out to Wonkette commenter Hairstrike Alpha. Just throwing in the occasional "Huge" or "best ever" or "Sad!" doesn't really make you sound like Donald Trump, see?

Once in a while she gets a little close to a Trumpian cadence, but then it all starts sounding like Maureen Dowd in the very next line:

“My temperament is so perfect for this job. The greatest temperament in the history of temperaments because you go through pressure and you have to be able to handle pressure. The brouhaha over whether I was a nut job was so unfair. It got so big that Dr. Phil and Dr. Drew were both on TV analyzing my so-called narcissistic personality disorder.

“They said this happens when megalomania and a sense of omnipotence, which are normal in childhood, are carried over into adulthood. They said the symptoms are an excessive need for admiration, a lack of empathy for others’ feelings, an obsession with achieving power and success, and the desire to take advantage of people around you.

“Does that even sound remotely like me? Not a chance. Sounds more like Bill Clinton and Ted Cruz.

That was almost fine until "brouhaha," which is a word that only the failing New York Times would use. Yes, we see what you're doing in the next graf where you insert the textbook definition of narcissism into Trump's stream of consciousness. That is the classic humor technique of incongruity, in which a sudden subversion of expectations surprises and delights the reader, provoking laughter. And it might have worked if you'd had a really good Trump riff going and then threw in the DSM-V definition, but without really sounding like Trump to begin with, the gag falls flatter than a liberal protester who's been stomped into the floor of a Trump rally, see?

So eventually after far too much Trumpian monologue about the summer when everyone talked about Trump being crazy, but he won anyway and is ready to take office -- and you know what would make it sound more like Trump? A sudden digression into his poll numbers. His poll numbers are so great, they're really terrific numbers, though you wouldn't know it from reading the lying New York Times. Digressions are what Trump is all about, not a consistent, linear narrative. And repetition. To do a good Trump, you have to do repetition. Everybody knows that. But not stupid Maureen Dowd. She doesn't get Trump. She just doesn't get him. Or China. She really doesn't see how bad China has been ripping us off. Can you believe that? That has to change. Really, does any of this next paragraph sound like Trump?

“The madness over my madness reached its peak in August, when Congress raced back from its break to pass legislation requiring presidential candidates to pass a psychiatric exam. That Republican Benedict Arnold, Jeff Flake, was the main sponsor, so it ended up being called the Flake Act. Ha-ha-ha.

Trump would never say anything like "madness over my madness." He just wouldn't. And he wouldn't go "ha-ha-ha," either. We should just be thankful she didn't wedge in a joke about The Madness of King George, not that it could have made any more of a hash of the thing that it already is.

But the ending, after the bad chronologically linear monologue that doesn't sound like Trump at all. The ending is so terrible. It's just awful. She does a surprise ending. But it's no surprise at all. We should probably give you a spoiler alert, there it is. Donald Trump is getting ready to take the oath of office, thinking about how it was Hillary who went crazy and cracked up, not him, and this is the ending she gives us:

But it’s two orderlies in white coats collecting the ex-presidential candidate, who lost in a landslide to Hillary after spending the fall being treated at Bellevue under the provisions of the Flake Act. After all the cries of “Lock her up!” it turned out he was the one who got locked up.

“Mr. Trump, it’s time for your impulse-control/delusion-reduction therapy,” one orderly says soothingly. “We need to go early. It would be crazy to miss the swearing-in today of Madam President.”

Get it? Get it? It was Trump who was crazy the whole time! He imagined the whole thing because he is crazy! Eat your heart out, M. Night Shyamalan. It's like every freshman creative writing story that was all a dream, or Michael O'Donoghue's timeless advice to always end everyone being suddenly run over by a truck. Or that one story Rebecca wrote in freshman comp where the characters were on acid and believed they saw the end of the world, but it REALLY HAD ENDED, or at least something really bad had happened, she left it pretty vague, TWISTO CHANGE-O!

In conclusion, we have proven that Maureen Dowd is a bad writer, she is incapable of doing a good parody of how Donald Trump speaks, and she writes very bad endings. "It's not fair!" she cried, and they were upon her.

P.S.: Ms Schoenkopf, is it OK that this wasn't five paragraphs?