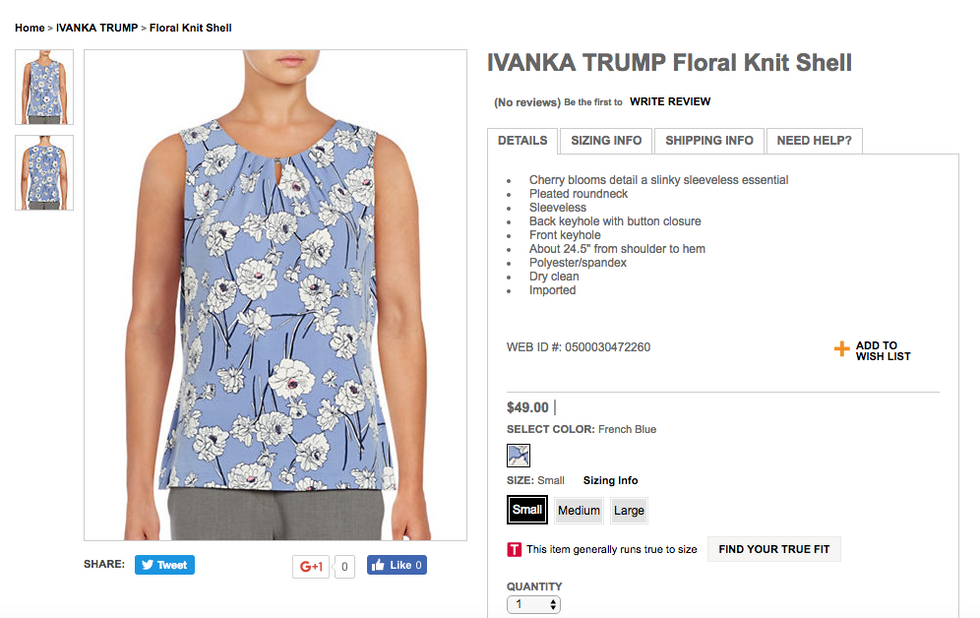 Several companies, including Nordstrom, Neiman Marcus, the Home Shopping Network and ShopStyle, have recently dropped Ivanka Trump's fashion line -- a move many are seeing as entirely political, including Donald Trump, who accused Nordstrom's of being "unfair" to his precious daughter.

But is it? Is it really? Is Nordstrom really being "unfair" to Ivanka? According to Nordstrom, the brand just hasn't been doing that well; it explained this in a statement to The Daily Beast:

“We made this decision based on performance. Over the past year, and particularly in the last half of 2016, sales of the brand have steadily declined to the point where it didn’t make good business sense for us to continue with the line for now. We've had a great relationship with the Ivanka Trump team. We’ve had open conversations with them over the past year to share what we've seen and Ivanka was personally informed of our decision in early January.”

I am also going to guess that the Home Shopping Network is not trying to make any big political stands all of a sudden. They're not dropping her clothing line because they're trying to hurt Ivanka's feelings, they're dropping it because it does not sell.

As Wonkette's resident fashion expert, I can tell you right now: If Ivanka's line were selling, these stores would keep it in stock. It is not selling. And you don't need to take these stores' word for that -- just look at the Ivanka Trump page on the Lord and Taylor website. About 90% of it is on sale, if not on clearance. This includes her most recent 2017 Resort line, which means it has not been selling.

I have never been a fan of Ivanka Trump's clothing line -- for reasons that have literally nothing to do with politics. I just happen to think it is not good. Not just for me, either! Because I spent many years in fashion, when I look at a line, I still look for who the customer is. More specifically, who the retail price customer is. I honestly do not know who the customer paying full retail price for Ivanka Trump's clothing line is.

I know a thing or two about buying, and I'm going to tell you right now that even if they slapped a different label on it, I would still not buy Ivanka Trump's clothing line if I worked for Nordstrom's or any other retailer like that.

First of all, it's manufactured and designed by G-III, the same company that makes Kensie (which I happen to like a lot of), the cheaper "licensed" versions of Calvin Klein and DKNY, and other brands like that. This usually means that the minimum buy is going to be larger and more of a wholesale-type situation, which means you're going to end up with a lot of crap you don't want in order to get the things you do. This is probably why so much of her stuff ends up on the clearance rack, and in Marshall's and TJ Maxx. But when you do a buy like that, you want at least most of the stuff to be salable.

Second, most of her line is a little too "in-between." By this I mean that a lot of it is "business-wear-esque" but not actually office-appropriate for a lot of people. It's also less-than-cohesive as a "brand," ranging from matronly floral patterns to the kind of business clothing you would wear if your business was being a fancy escort who sits in a hotel lobby trying to look like a business woman.

The quality, also, is low for the price-point -- you can tell that it's cheaply made using cheap materials.

But let's take a look at some of her lewks!

WHO IS EVEN WEARING THIS AND WHY? A long-sleeved floral dress you can't wear a bra with because the shoulders are cut out, that is too short for work, won't really work with tights, isn't cute enough to wear on a date... it doesn't make sense.

I will give you a moment to contemplate what on earth anyone would wear these shoes with, and in what kind of weather.

This bag looks like it was cobbled together from Betsy Johnson's reject pile. Get it out of my face.

Hi, it's me, the shirt your aunt bought you 12 years ago on special that she thought was "just fun!" It sure is boring hanging out here in the back of your closet forever!

Well! Someone certainly likes dandelions, and also clothing that looks like it could double as scrubs.

UM, are you trying to be sexy for a Jimmy Buffet concert?

WHY WOULD YOU DO THAT COLLAR TO ANYONE? And the sleeves make it look like it just shrunk in the wash and were not supposed to be that length on purpose.

Hello, the '90s called, they have that dress that you didn't even buy then on sale for only 80 dollars, if you're still interested!

Hello, Nordstrom? Do you have a dress that will make me look like a linebacker? Oh no, you stopped selling that brand? What a shame!

Oh hey, look! It's another shirt that looks like you made it from your grandmother's curtains! Fancy!

The selling point of her brand is supposed to be her name -- it's not worth much outside of that. It's not like she designs the clothes herself -- she basically just slaps her name on something someone else designs. Her name isn't selling the clothing anymore, it's as simple as that. As much as I'd like to think that this means that the #GrabYourWallet boycott of Trump products has been successful -- I also just think her clothes are really ugly and tacky and not selling anyway.

However! If Trump supporters feel like these companies are being unfair, then they should go and purchase Ivanka Trump clothing at full retail price, rather than getting mad about it not selling to people who don't want it.