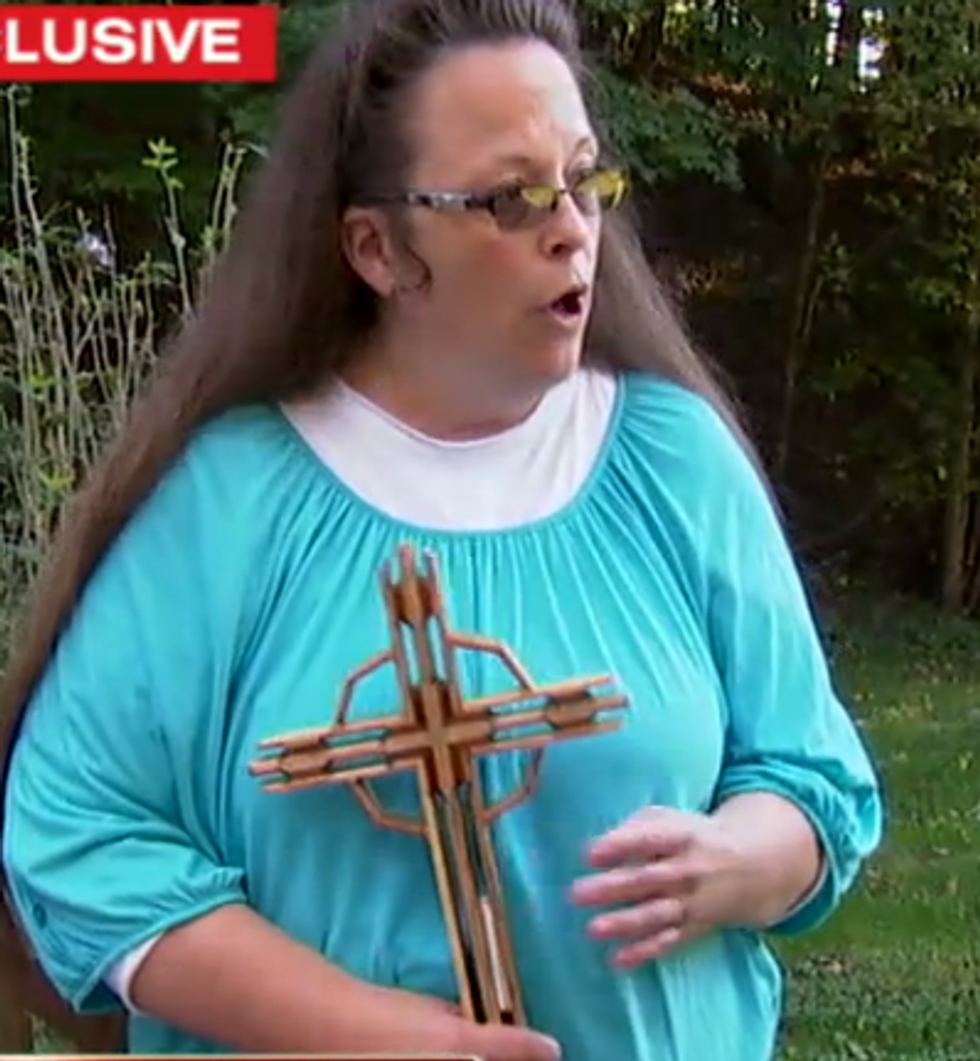 We're gonna need a bigger cross. Seriously, she can't get up on there!

Oh, Kim Davis, we somehow knew you wouldn't fade gently back into obscurity, and we certainly knew you wouldn't wake up with any bright ideas like, "Maybe I should do my fucking job today!" Davis is heading back to court because, SHOCK AND AWE, she's probably still defying court orders. Because, see, if you'll remember, her deputy clerk Brian Mason has been issuing all the marriage licenses for the gay homos and the lesbyterians, but when Davis went back to work, she said, that's fine, but we're gonna scratch my name off right here and sign it "DARK LORD SATAN." Hope that's OK with these sodomites.

According to the ACLU, Davis's little modifications are against the judge's orders:

When she returned to work last week, she confiscated all the original marriage forms and provided replacements with numerous changes, according to a court filing by one of the deputies, Brian Mason. Among other things, she deleted all mentions of Rowan County, added the documents were issued “Pursuant to Federal Court Order” and replaced her deputy clerk’s official title with “notary public.”

So back she goes, before U.S. District Judge David Bunning, who we'd imagine has had it up to his eyeballs with her shit. In fact, he might just throw her back in the pokey with her jail wife Myrtle, due to how his order explicitly said she was not "interfere in any way, directly or indirectly, with the efforts of her deputy clerks to issue marriage licenses to all legally eligible couples." We think her little changes might count as interference!

So, GO TO JAIL, DO NOT PASS GO? Maybe! After all, Myrtle has missed her. And no, Mike Huckabee, as much as we'd like you to go away, you cannot go in her place.

So good thing she's scheduled a little media-whoring this week, in case Pontius Pilate orders her to suffer in jail once more. Here's Davis talking to ABC News about how she is super-willing to go to jail, and also some more of those alligator tears we've come to know and love:

"People are saying you're a hypocrite. Are you?" asks ABC's Paula Faris.

"No, I’m forgiven," Davis says. "Washed clean." See, because in Jesusland, nobody ever has to take responsibility for their actions, as long as they state that Jesus has washed their sins away. Josh Duggar got the Jesus pass, when he stole third base with his sisters. The son of Davis's buttbuddy Huckabee got the Jesus pass, when he killed that dog. It's all fine now. Don't you worry about it.

Other interview highlights! Who's your real daddy, Kim Davis?

My constituents elected me, but the main authority who rules my life is the Lord.

Gotcha. Davis says she has gay friends (!!!) and that "they know where I stand." Would she deny THEM marriage licenses, or would she make an exception because obviously she and her fruity pals are such sisters from another mister? Already did, she says!

I can't put my name on a license that doesn't represent what God ordained marriage to be.

But those aren't the licenses she's been tasked to give out. These are CIVIL marriage licenses, which are different from whatever God ordains in her little bigot brain. Is Kim Davis under the impression that her office is just a little outpost of Jesus out there in the wilderness, stamping her God's orders for the people?

Kim says it makes her very sad that the homosexuals want marriage licenses anyway, as if somehow "a piece of paper" confers dignity upon people:

I don't think dignity is guaranteed in the Constitution. I think dignity is something that you find within yourself. I feel really sad that someone could be so unhappy with themselves as a person that they did not feel dignified as a human being until they got a piece of paper. There's just so much more to life than that.

OH MAN, FUCK YOU, LADY. You see, once upon a time, Kim Davis was living for the Devil (says she was "real good" at it, haha, WE BET), and she treated marriage licenses like Happy Meal toys at McDonald's (COLLECT ALL FOUR!), so she'd never understand what it's like to live your whole life being treated like a second-class citizen who can't even visit his spouse in the hospital when he's dying, but it's not our responsibility to educate her, so we'll just stick with "Fuck you."

Finally, what else makes Kim sad?

What probably hurts me the worst [tears] that my God does not love me! Or that my God is not happy with me! That I am a hypocrite of a Christian.

It was probably that Wonkette post we wrote, when we explained how Kim is already going to hell, having been completely abandoned by God because she accidentally did a marriage license for a transgender earlier this year. Our bad, sorry we made you sad.