Mayor Pretty Sure Atheists Are Just Like Nazis Or The KKK, Take Your Pick 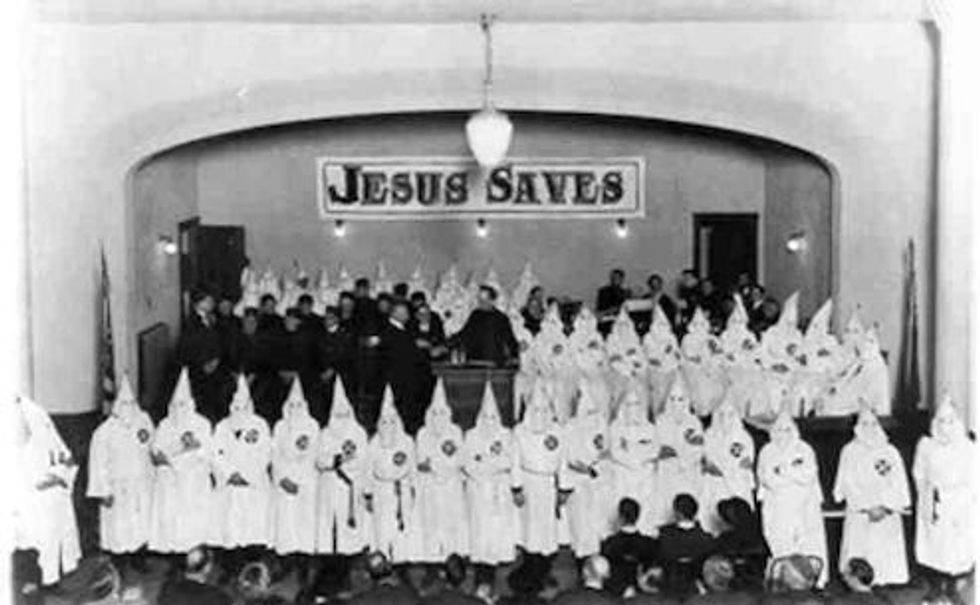 Perhaps if you are a small-town mayor, you crave recognition. You just want someone to know you're there, that you're master of your tiny-ish domain. And any publicity is good publicity, right? So why not engage in a really cartoonish level of textbook bad behavior about religion and free speech, making it a foregone conclusion that the ACLU will sue your pants off? That's really the only explanation we can think of to account for Jim Fouts, mayor of Warren, Michigan, who decided that he should compare atheists to Nazis and KKK members after they had the goddamn gall to ask to set up a little atheist chat-type thing next to the town's Jesus station that lives in City Hall.

The American Civil Liberties Union in Michigan and two secular groups are suing the city of Warren and its mayor, Jim Fouts, on behalf of an atheist resident who was forbidden from setting up a "reason station" alongside a long-standing "prayer station" in the City Hall atrium.

While Fouts has permitted a local church group to distribute religious pamphlets and pray with visitors in the atrium since 2009, he rejected a similar proposal by Freedom From Religion member Douglas Marshall to discuss atheism and freethought in April.

Not one, not two, but THREE plaintiffs are mad at you, Jim Fouts! That is kind of impressive, but then again you went to really great lengths to get on their radar. Here's what Fouts wrote in his letter declining the reason station. We think you'll agree that it is a whole bunch of really sound reasoning and not at all inflammatory-sounding.

We cannot and will not restrict this right for any religion to use the atrium, as long as the activity is open to all religions.

Freedom from Religion is not a religion. It has no tenets, no place of worship, and no congregation.

To my way of thinking, your group is strictly an anti religion group intending to deprive all organized religiouns of their constitutional freedoms or at least discourage the practice of religion. The City of Warren cannot allow this.

It's sad that Fouts believes that the citizens of Warren have such a tenuous grip on their faith that they would not be able to withstand the onslaught of an atheist hanging about and trying to talk to them about Not Jesus.

But let's give Fouts another chance to explain himself. Maybe an aide wrote the letter or something, and if Fouts could just have a moment to tell his side of the story, this would all make sense. So thank goodness the AP reached out to him to find out what he meant and give him an opportunity to clear this whole thing up. Haha NOPE.

Comparing atheists to Nazis and white supremacists, Fouts argued that Marshall's "reason station" would be fundamentally antagonistic to prayer.

Seriously, that statement is like a freshman civics question where you have to spot how many wrong things are with it. Your city has some monolithic set of values, all of which revolve around Jesus. Anyone who doesn't believe in god is just like a Nazi or a member of the KKK. Just having someone sit around being all atheist is disparaging to the not atheists in the room.

See? There's so much wrong-headedness crammed into it that we can only imagine it had to be some sort of stunt, because Jim Fouts cannot really be this stupid, can he? We can't wait to see what his poor attorney has to file in response to this lawsuit. Fouts will probably just demand he files a one-page response that says only "JESUS RULES, ATHEISTS DROOL," because that's the stunning level of discourse we've come to expect. Think how hard he's going to take it when someone explains to him that the KKK are generally Christians? We can't wait.