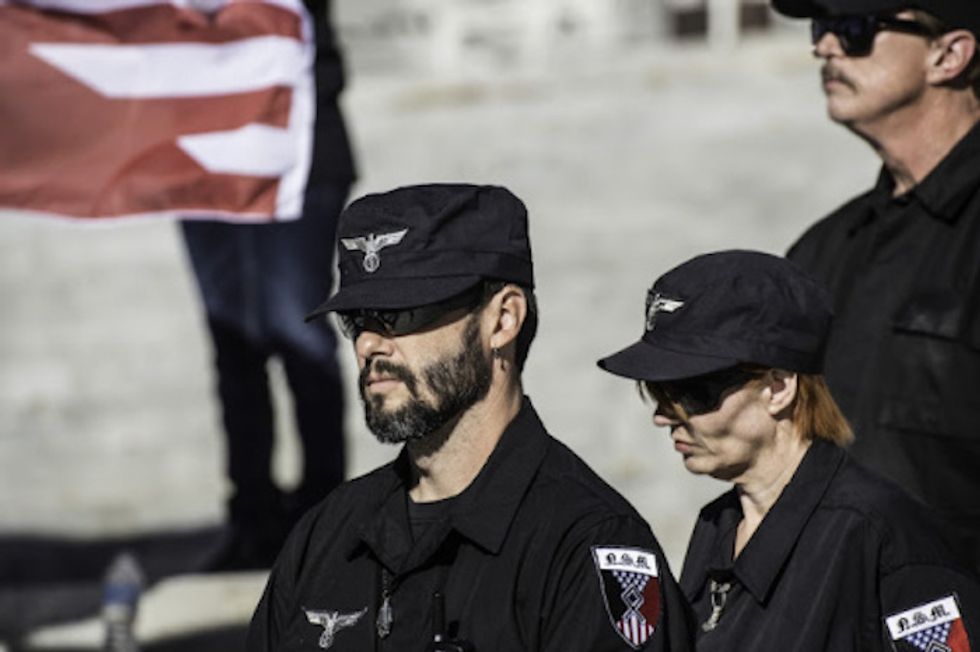 A pagan neo-Nazi couple, Eric Meadows and his wife, Angela Johnson, have purchased 44 acres of land (about the size of 43 football fields) in rural Meigs County, Tennessee, with the intention of establishing a community for the like-minded bigots of their near 300-person strong pagan neo-Nazi Facebook group.

Online, he and his wife have gathered around themselves a community of white supremacists who subscribe to a revitalized offshoot of early Germanic paganism called "heathenism."

The couple has added members to a closed Facebook group that has ballooned to just under 300 members over the past several months.

The group's page states: "Wotans Nation is indeed on the rise! The formation and creation of an actual location and community in the works and close to becoming a reality."

The group's website also indicates members who pass background checks will be able to move into the community and rental cabins will be constructed for visitors.

"Wotans Nation offers membership within the Nation to Folkish Heathens that meet the requirements and are willing to move into the Nation and become active participants in the community."

Folkish Heathens, by the way, are not atheists who are way into Woody Guthrie. Folkish, in this instance, refers to the Völkisch movement, which was sort of a German-mythology-inspired "back to the land" movement for racists prior to actual National Socialism taking hold. Heathenry refers to the actual occult stuff that the Nazis were into, which you probably already know a ton about if you happen to spend a lot of time watching the History Channel. Many high ranking Nazis were known to be part of the Thune Society, and into both German mythology and theosophy.

The group calls itself Wotans Nation -- Wotan being another word for Odin, as these people also refer to themselves as Odinists. It appears to be a branch of Wotansvolk, the white nationalist pagan religion founded by David Lane -- a former member of the terrorist group The Order -- while he was serving time in prison for being the getaway driver for the murder of Jewish radio host Alan Berg and a variety of other crimes. He is also the originator of the 1488 slogan, the 14 words ("We must secure the existence of our people and a future for White children") and the 88 precepts (though "88" also stands for "Heil Hitler" in Nazispeak).

Their website, which is currently down, explained their "mission."

"As the indigenous Europeans are increasingly being called home by our ancient Gods there arises a need for our folk to have a place to practice our religion freely, without fear of social stigma and in a healthy and natural environment among other culturally and spiritually similar people," it states.

"It is in that spirit that the Wotans Nation project has been formed Wotans Nation is an actual community within Eastern Tennessee made up of Folkish Heathens coming together and working as a theologically based community."

Meadows, who calls himself "Erik Thorvaldsson" (Eric the Red's actual name) online, has been active in white supremacist movements for quite some time now. He was previously associated with League of the South and hosted an internet radio show called "NSM Hoff" (the NSM referring to National Socialist Movement) up until a few months ago. His wife, Angela Johnson, has also been a known member of the National Socialist movement.

This is, of course, far from the first time this century that someone has gone and tried to create some kind of intentional community for racist white people. Certain condo associations aside, there was also the failed attempt by white-supremacist-who-turned-out-to-be-part-black Craig Cobb to turn Leith, North Dakota, into Nazi Paradise.

One Meigs County resident, Jason Choate, believes this will not go over well:

"If the community gets involved and figures out what's going on, then I think they've made a mistake as far as picking a place to do that. Meigs County is a small community and everyone sticks together. When people in this community make up their mind that you're not welcome, then they have their own way of taking care of things," he said.

However, the county is 96 percent white, and according to one teenager who lives there, up until a couple decades ago they would have chased off any black people trying to move in. Another teen says he's heard kids at school talking about how they were looking forward to joining. Dakota Ricker, one of the few black people in the county, pointed out that "[i]t's Meigs County. Everybody's racist in Meigs County," noting that a few more racists wouldn't chase them away.

The mayor's response to this group moving in was simply to talk about how much people in Meigs County love the Bible:

"The people of Meigs County are a very religious people that believe in the Bible and teaching their children right from wrong and the Ten Commandments and that's what our county people stand for. They go to church, they worship God and they raise their children that way."

While it may seem like these Nazis may be doing the world a favor by keeping to themselves on their Aryan compound, it is also pretty terrifying, given that groups like these tend to be partial to gun hoarding and militia building. Considering that the guy who basically started this religious movement was an actual Nazi terrorist, it does not seem like this will end very well.