McDonald's Has New Secret Cure For Severe Burns (It Is Mustard) 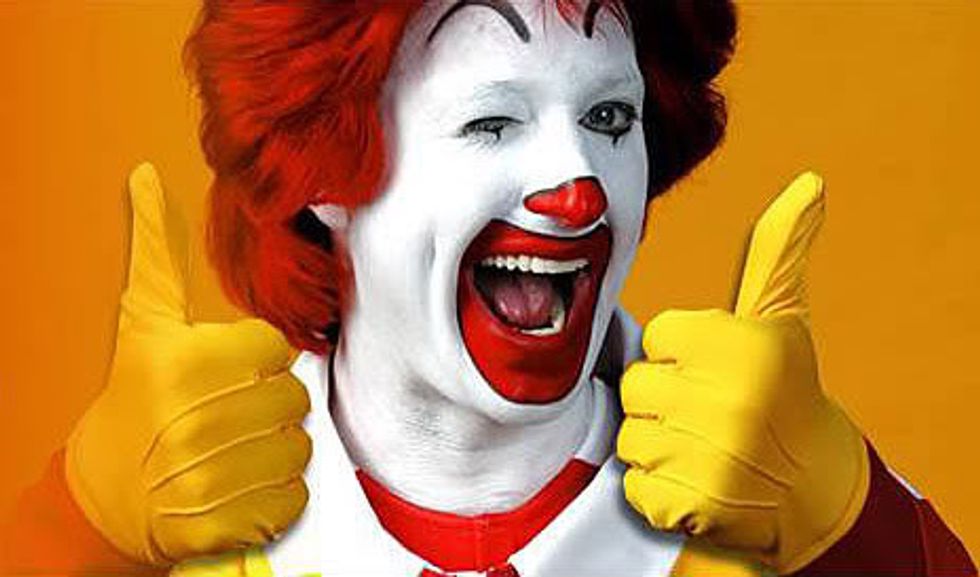 Working at McDonald's has probably never been high on your list of fun things to do, although maybe you've done it in order to earn some cash, and that can be a good thing. But fast food restaurants don't typically fall all over themselves to treat their workers well, and workers sometimes try to form unions, and strike for a higher minimum wage and safer working conditions. And occasionally, workers even expect to be treated at least as well as you would treat your dog when they get injured on the job, because workers are so demanding that way. On Monday, a group of low-wage fast food workers who were definitely not having any job fun filed 28 complaints with the U.S. Occupational Safety and Health Administration (OSHA), alleging that "understaffing and time pressures in stores have led to burns, falls and other injuries." The complaints were filed with the backing of Fight for $15, a union group that fights for a higher minimum wage and unionization in the fast food industry.

McDonald's sounds like a terrible place to work, let's learn more! For example, Brittney Berry, a Chicago-area McDonald's employee, was rushing around, as you do when you are a McDonald's worker, and she slipped and caught her arm on the grill.

"The managers told me to put mustard on it," she said, "but I ended up having to get rushed to the hospital in an ambulance. This is exactly why workers at McDonald’s need union rights."

You know what? We would tend to agree with her on the union rights issue. Mustard is a delicious condiment, especially on a hot pretzel, but when we think "terrible grill burn," we don't jump right to "You know what would help? Mustard!" Not just because mustard is spicy and would burn even more, but because it is the absolute wrong thing to do to someone in a medical emergency, what is even wrong with you people?

A recent online survey of fast food workers commissioned by the National Council for Occupational Safety and Health found that 87 percent reported having been injured on the job in the past year, and 79 percent reported having been burned. The Huffington Post notes that the firm, Hart Research Associates "often polls for progressive groups," and also that it offered gift cards in exchange for completion of the poll on Facebook, but guess what! Despite the questionable polling methodology, we're still going to assume, for lolz, that fast food restaurants are not Eden-like gardens of safety and worker protection, because we aren't stupid. In its report, Hart noted:

Incredibly, one-third (33%) of all burn victims say that their manager suggested wholly inappropriate treatments for burns, including condiments such as mustard, mayonnaise, butter, or ketchup, instead of burn cream.

You're gagging at the thought of putting ketchup on a third-degree burn? Okay, we'll wait. We can't help noticing a trend in treatment suggestions here. Obviously, condiments are the go-to first aid item, and that's cool, but maybe they should branch out a little bit. Oh, you slipped and fell on the greasy floor? Here's a frozen burger -- put that right on your bruise! Cut your finger on the slicer? Shove in a couple fries -- that'll stop the bleeding, they're very absorbent. If your back hurts, duct tape some hot apple pies on there, it feels just like a heating pad. Can you imagine being a low-wage worker who gets hurt while working somewhere other than a fast food restaurant? What on earth would you use if you broke your arm and there wasn't any soft-serve ice cream around? Or if you had a headache, and you couldn't staple chicken tenders to your eyebrows? Yeah, these folks need unions, plus Obamacare, plus higher wages, plus maybe at least some bandaids and neosporin. We can't even.