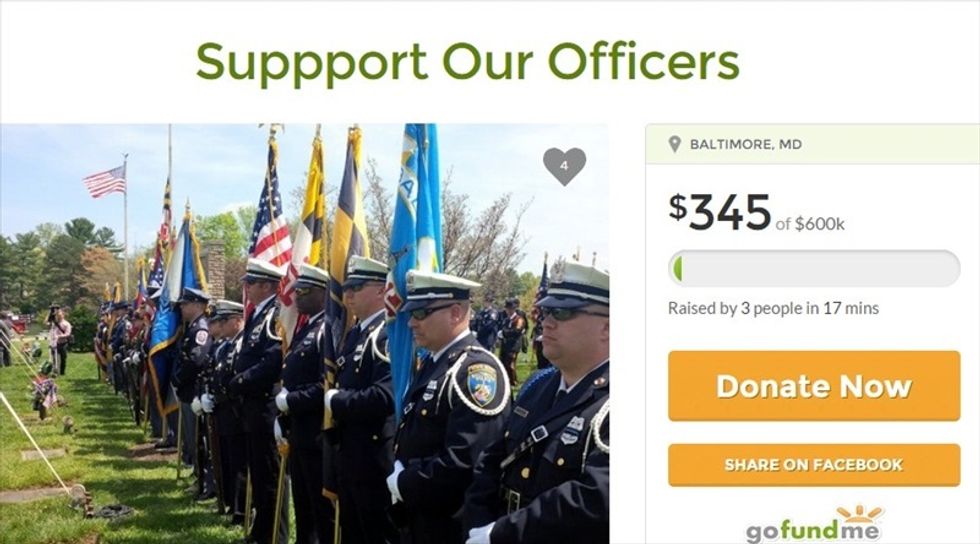 Why does GoFundMe hate the wingnuts so much? It seems like every day, somebody is putting up a campaign, only to have it canceled, just because the beneficiaries of the sweet wingnut cash quote unquote "broke laws." First you had them taking down the anti-gay Oregon cake bakers' GoFundMe, because they were found to be in violation of Oregon civil rights laws. (The owners contend that Satan did it, of course.) Then the gay-hating flower lady, Barronelle Stutzman, had her GoFundMe taken down as well because, oops, she actually violated Washington state laws. And now, the nice Baltimore Fraternal Order Of Police (they are not nice) tried to raise some money for the cops who are charged with murdering Freddie Gray, and their campaign was gone within 41 MINUTES, because apparently raising money for accused murderers isn't cool anymore, how is that EVEN fair?

They wanted to raise $600,000 for the officers, but only got $890 into their goal before they got the old banhammer. GoFundMe confirmed to RawStory that they took it down because it's against their policies to raise money for people who are subject to "formal charges or claims of heinous crimes." But police officers don't ever do anything wrong, so we're confused as to why they're not making an exception in this case. In fact, the police union already said, in a letter, that these cops did everything right, and that Maryland State Attorney Marilyn Mosby is CLEARLY only doing this for political reasons. Besides, weren't the Baltimore police just saying last week that Freddie Gray probably broke his own spine? Yeah! Think about that one for a minute, GoFundMe, before you make any hasty decisions!

Fox & Friends discussed the story over the weekend and, to our utter shock and amazement, did not screech about how the REAL murder victim here is Freedom, but that's probably because it was the weekend crew, as opposed to the weekday crew of Steve Doocy, Elisabeth Hasselbeck and the Rapey-Looking One.

Of course, it should be noted that GoFundMe ALSO canceled a campaign to raise bail money for jailed Baltimore rioters, who are, just like the allegedly murderous cops, charged with crimes. So MAYBE they don't hate Jesus and cops and conservative white people, but just simply have set rules that they abide by, and people shouldn't bitch and moan when they run afoul of them.

Nah, let's just say Satan is canceling all the GoFundMe campaigns. It's much easier that way.