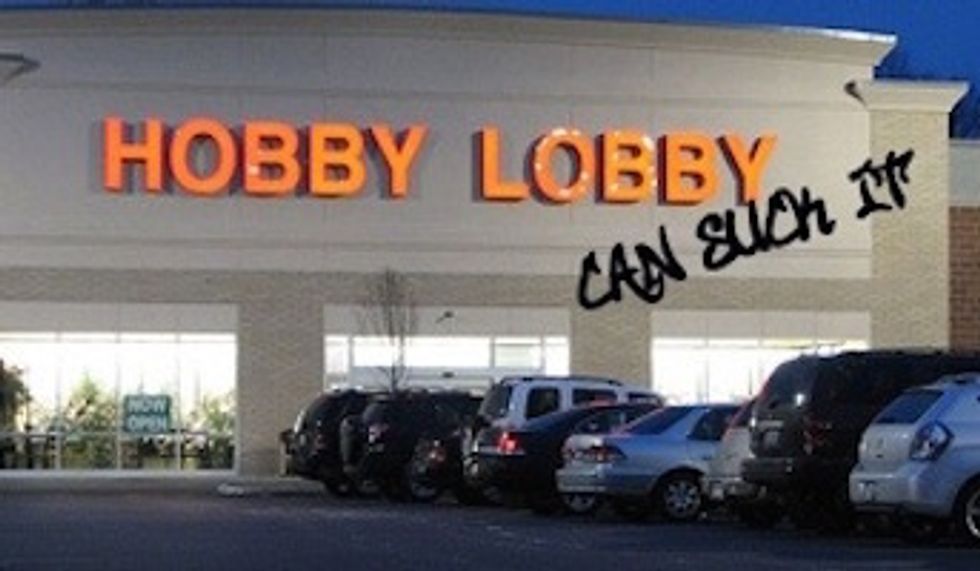 Uh oh, America is being mean to Hobby Lobby again. First, the preferred arts and crafts store of Christian vlogger moms in the Bible belt was forced to perform late-term DIY abortions in aisle 13, right next to the scrapbooking supplies. Thankfully, five unelected lawyers in robes swooped in to save them before Jesus went on a crying jag. But now Hobby Lobby's sincerely held religious beliefs are being persecuted and fed to the lions once again, because a transgender employee wants to go potty without having to flash her hoo-ha to her Hobby Lobby bosses:

[Meggan] Sommerville has worked for the Hobby Lobby in East Aurora, Illinois since 1998, and she still does. She began her transition in 2007, and in early 2010, officially switched her nametag for her new chosen name, which was made legally official later that year. Hobby Lobby was fine with recognizing Sommerville’s name, allowing her to dress and present as a woman, but drew the line at letting her use the women’s restroom.

In order to qualify for the extra-special privilege -- protected by the Illinois Human Rights Act -- of being able to take a whiz in the ladies', Hobby Lobby demanded to see legal proof that she was a she now. So she provided her driver's license, a court order, a note from her doctor, a letter written in her own blood, a homemade semaphore flag (materials available in the third aisle, on sale!), and, oh yeah, a copy of the law that says Hobby Law is not allowed to discriminate against her because of her gender identity.

You'd think that would have been enough -- if you are a moron who is unfamiliar with how Hobby Lobby works. Because of course that wasn't enough for Meggan Sommerville to be permitted to tinkle in the bathroom of her choosing. Hobby Lobby wanted proof that she had undergone surgery to put some ladyparts in her drawers. If she didn't have her dingle snipped, why, she might have been faking the whole thing. Clearly going to court to change her name, and all of the head-aching hassle a name change requires, doesn't prove her seriousness about being A Lady. (Ask any hetero cis lady of any gender who has tried to change her name after getting opposite-sex married how many days she had to camp out at the Social Security office and the DMV and the bank to change her name to Mrs. Husband S. Name, and she will guaran-fucking-teed yell at you "HAHA, I AM STILL CAMPED OUT THERE, I AM NEVER GETTING OUT, I AM GOING TO DIE HERE PROBABLY!")

Now, what kind of dick or lady dick or teeny tiny dick a human being person has tucked inside of his or her or its delicates is, in our humble opinion, nunya bidness. Not even if you are the boss of said him/her/it. Or a Very Concerned Citizen -- say, in Bumfucksville, Ohio -- who thinks they're comin' for your religious freedoms if a little girl uses the little girls' room at school to go pee pee, even if she was born with a boy vag.

But we are not the Good Christian folks of America, and those people have very different hobbies and interests, like knowing exactly what kind of sex parts you got down there and what exactly you plan to do with them. Like the Duggars, who are very worried about little girls getting molested in public restrooms, but not so much about their little girls getting molested right under their own roof.

And we are certainly not like the Good Christian owners of Hobby Lobby, who think slut pills and baby-bortions are bad, except for when Hobby Lobby's making money with investments in the very companies that make those sinful drugs.

Too bad for Hobby Lobby that Administrative Law Judge William J. Borah thinks Hobby Lobby does not in fact have a legal right to get a good look at Sommerville's down-theres before allowing her to drop a dookie while playing Words With Friends in whatever store restroom she goddamned chooses.

“Nothing in the Act makes any surgical procedure a prerequisite for its protection of sexual related identity. Therefore, Respondent’s unilateral surgical requirement is untenable.”

Furthermore, Borah was unconvinced by Hobby Lobby’s arguments that Sommerville’s presence in the bathroom would make others uncomfortable. “A co-worker’s discomfort cannot justify discriminatory terms and conditions of employment. The prejudices of co-workers or customers are part of what the Act was meant to prevent.”

Feeling icky because Meggan might still have an outie is not a good reason for refusing to obey the law. The judge was pretty clear about that. But of course, Hobby Lobby does not believe in listening to judges, unless the judges tell them what they want to hear, so months after the administrative judge issued his ruling, which still must be affirmed by the state's Human Rights Commission, Hobby Lobby still isn't allowing Sommerville to relieve herself in the bathroom of her choice.

If you're the betting type, you can go ahead and bet all of your arts and crafts that the Hobby Lobby folks will not be satisfied unless and until they find some sympathetic unelected lawyers in robes to assure them they are absolutely allowed to disobey the law and discriminate against whomever they want, if they sincerely believe that's what Jesus would want.