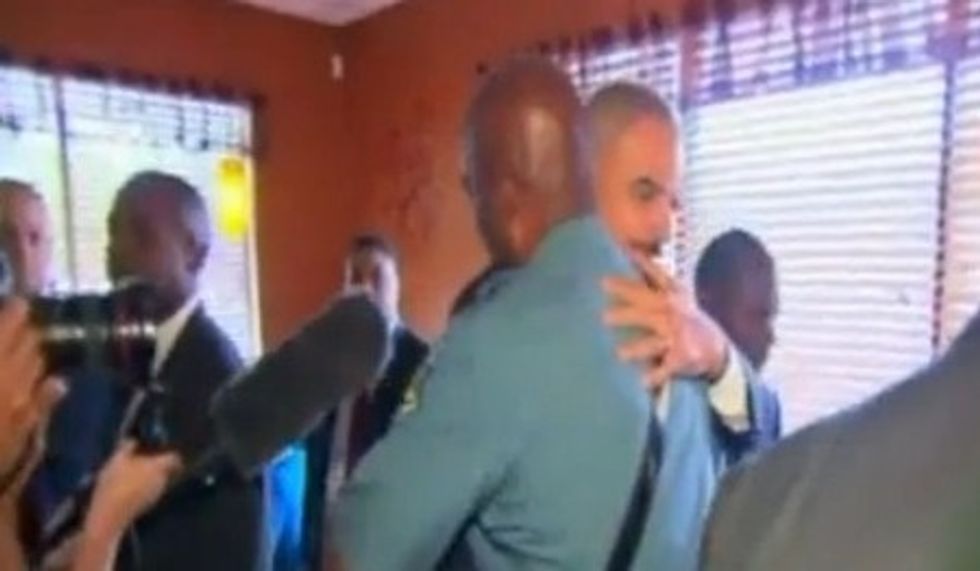 Attorney General Eric Holder spent Wednesday checking on the progress of Barack Obama's tyrannical federal takeover of Missouri, and while he was there, he had what we assume is a totally coincidental path-crossing with Ron Johnson, captain of the State Highway Patrol and Guy Who's In Charge Around Here. Holder had taken a break from inspiring local community college students and usurping the state's right to gloss over its own (potential) wrongdoing to have some lunch at Drake's Place in Ferguson. Happenstancely, that's just when Ron Johnson got hungry too! What are the odds? (The odds are nil because obviously, Ron Johnson is a MACHINE that runs on adrenaline and integrity.)

"My man. You are the man," Holder greeted Johnson as they embraced in front of a gaggle of cameras. After whispering something in his ear, Holder asked Captain Johnson whether he was getting enough rest. Johnson said he'd come home recently to find a card on his pillow from his sleeping wife, wishing him a happy 26th anniversary.

"You didn't forget, my brother?"

OK, protesters of Ferguson, things have officially gone too far. You forced a cop to be indefinitely suspended just for threatening to kill you, you have the Federales sniffing around your bizniz, and now you got Captain Ron in trouble with Mrs. Captain Ron. Eric Holder said he would write the King of Ferguson a note, which we imagine will read "Please excuse Ron for forgetting the anniversary of your joyous union while he was trying to salvage race relations for the whole country. We'll have him back to you in no time once everyone is getting along and prejudice has been eliminated."

We checked, and Miss Manners says that trying to maintain some semblance of peace when all hell is breaking loose is one of the few acceptable excuses for forgetting your anniversary, as long as you have a note from the attorney general, so we think Captain Ron should be all right.