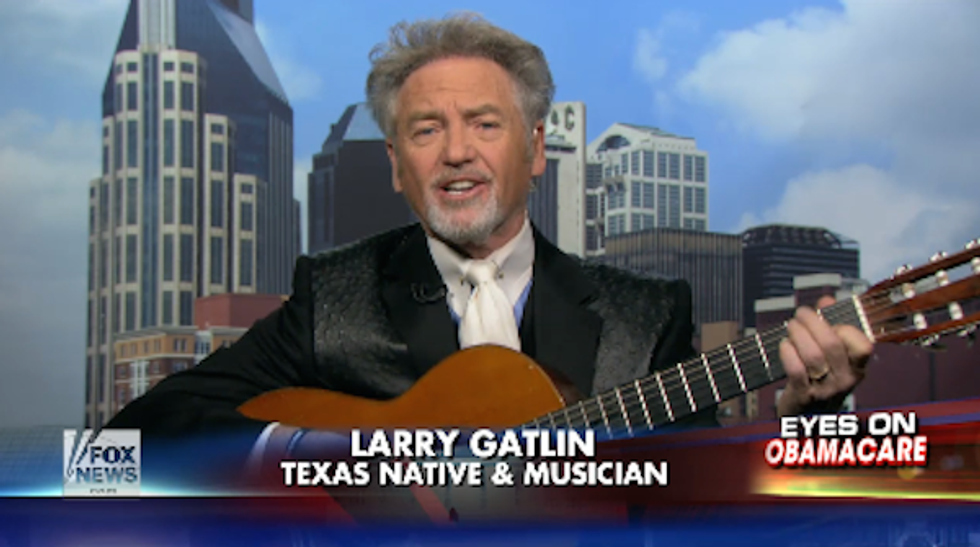 Oh no, horror of horrors! A Democrat said a mean about Texas. OK, yes, the Democrat is Rep. Alcee Hastings, and yes, he is from Florida, so maybe he should not do smack-talking of other states because, you know, Florida, ahem cough cough.

But aw hell no, Hastings said Texas is "a crazy state" and that you could not pay him "all the tea in China" to live there, and we totally get it, but then, you could not pay us all the U.S. American dollars in China to live in Florida either, even if it does have Miami and your grammaw.

But Demoncrat Alcee Hastings scoffed at Texas just because of how it is like, "Ugh, Obamacare, gross, we will secede before we have Big Gummint health care!" So now everyone in Texas is like Don't Mess With Texas, with a hashtag even, so you know this is some serious bidness, and there will probably be another civil war if Texas has anything to say about it.

Naturally, Fox News called upon A Expert, country music has-been Larry Gatlin, to explain to Rep. Hastings how Texas is THE BEST, and Alcee Hastings is THE WORST, except for that other Florida Democrat, Debbie "Waterfoul" (or as regular people call her, Rep. Debbie Wasserman Schultz) because she's THE WORST too, which proves Florida sucks and Texas is better, because Texas has never sent anyone terrible to Congress.

Clearly, this is best explained in song, so let's watch Gatlin song-splain how he is going to kick Rep. Alcee Hastings right in his Floridian behind, for Texas and America and lolz.

The eyes of Texas are upon you

Better not come near

The eyes of Texas are upon you

Then he interrupts his song to say, "Steer clear. Did you get it? Steer clear." Because, like, steer? In Texas? Yeah. We get it, Larry. You're real clever. Go on:

You said things about my Texas that just were not kind

And if I get a chance, I’ll open up cowboy boot shop in your behind.

Hahahaha, that's hilarious! At least, Fox & Friends blond guy Steve Doocy thinks so, but he is A Idiot.

Don't worry, Rep. Hastings, you probably don't need to be too a-scared of Gatlin actually kicking your ass. He likes to play Patriotic Tough Guy on the teevee, but when he had his chance to go kick some ass in the 'Nam -- for America! and Texas! -- he had other priorities, like playing sportsball instead.