Meghan McCain Reveals Nothing In New Column About Nothing 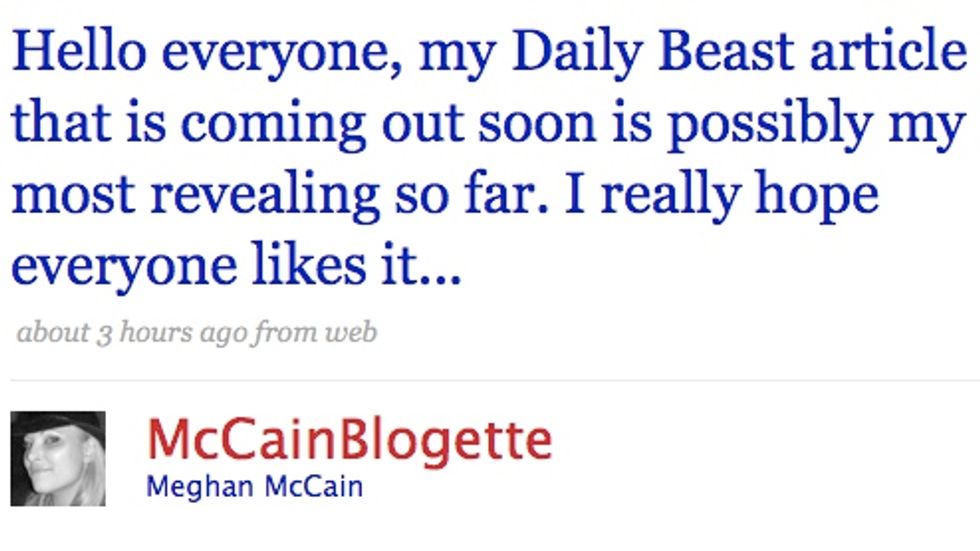 Nah, we've read the whole thing, and there's nothing dirty. Tricksy tricksy Meghan! The column's called"The GOP Doesn't Understand Sex" and it's like, for serious, what is up with the GOP totally not ever talking about sex? What is up with that dudes? But she's Meghan McCain and she don't censor nothin', she'll write about sex (vaguely) all day long; can you hatin' bitches even handle that?

A couple of things to point out. (If you just want a verdict, though, the column's dull and vague and hypocritical and self-important and poorly written. See you at the next post!)

Let me get something straight: Bristol Palin, as an eighteen-year-old adult, is free to make her own choices and decide how she wants her life to unfold. But for whatever reasons, the American public and media remain overly engrossed in our politicians’ sex lives and, as in this case, those of their families. There’s an especially unhealthy attitude among conservatives. Daughters of Republican politicians aren’t expected to have sex, let alone enjoy it—as if there were some strange chastity belt automatically attached to us female offspring. God forbid anyone talk realistically about life experiences and natural, sexual instincts. Nope, the answer is always abstinence.

As for Bristol, well, maybe her mother shouldn't keep thrusting her onto the teevee or the lecture circuit every minute and instead declare her off-limits to the media permanently. Then people might forget sooner or later! But enough about goddamn Bristol Palin, and on to the topic at hand: do you, Meghan, wear the chastity belt, as you are required to? We are never told. (Because that would be weird.) (Then why even write this?)

This is something I know about firsthand. During my father’s 2000 presidential campaign, a reporter asked how he would feel if I became pregnant and wanted an abortion. He answered that it would be my choice, sending shockwaves throughout the party (because for the GOP there is only one answer, and obviously Senator McCain’s daughter shouldn’t be engaging in sex ever)...

But seriously, here was a father, delicately navigating a question about his teenage daughter and being true to the kind of father he had always been, and the Republican Party was outraged. It didn’t matter that my parents raised me knowing, regardless of the mistakes I might make, they would allow me the dignity and courage to make my own choices. That’s the kind of trust my parents have always placed in their children—yet the GOP still needed to get involved and have a say in what I did with my body.

Here’s what I’ve never understood about the party: its resistance to discussing better access to birth control. As a Republican, I am pro-life. But using birth control and having an abortion are not the same at all.