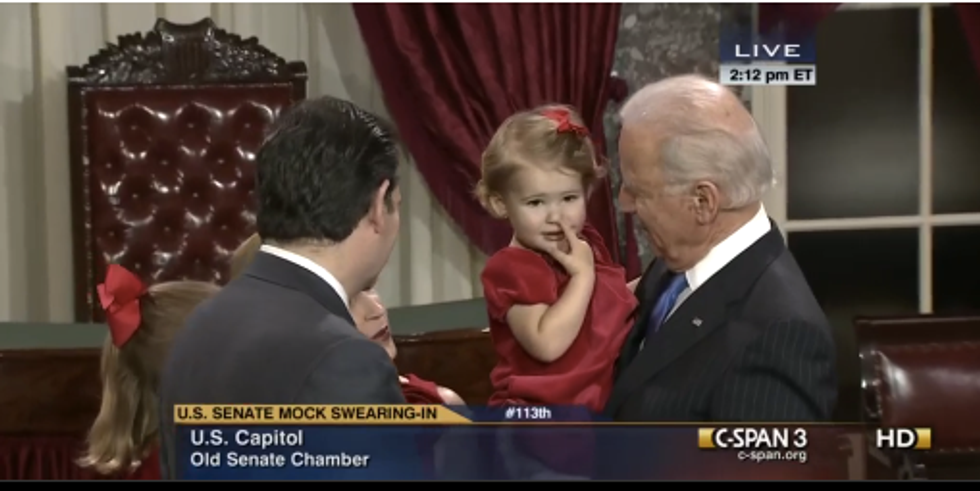 We guess someone said something mean about Ted Cruz's kids, and it was not Wonkette. Which is weird, because we were calling them jerk babies back when Dad was just getting sworn in to his first term in the Senate. Oh, wait, isn't it still Ted Cruz's first term in the Senate? Is the Oval Office really where Republicans want their leaders to get "on the job experience"? LOL silly, that is only if the president is black. ANYWAY, why won't everyone Think of the Children today? Let's find out together!

Let's see if Meghan McCain can explain it to us:

OK, so the Washington Post said something about Ted Cruz's kids. Got it. But can she clarify?

Firstly, I had no idea Chelsea Clinton was running for president, which seems like a real dick move at her mom. Like, way more of a dick move than when Tammy ran for president against her brother, the hot guy from American Pie, because they both wanted to bang the same chick.

Still don't know what the dastardly WaPo did to the Cruz kids, besides possibly expose them to their website that loads worse than Wonkette times Salon, but I feel like there is some kind of memory niggling at my brain, let me put down the opium pipe and remember REAL HARD....

"Do you know why Chelsea Clinton is so ugly?"

"Because Janet Reno is her father."

If we still care about why everyone is mad, let's go to WaPo itself.

Sen. Ted Cruz on Wednesday blasted a Washington Post editorial cartoon that portrayed his two young daughters as monkeys on leashes, stating that children should be off-limits.

"Not much ticks me off, but making fun of my girls, that will do it," Cruz told reporters in Tulsa, Okla. His daughters Caroline and Catherine are 7 and 5, respectively.

The Post has since taken down the online animated cartoon, by Pulitzer Prize winner Ann Telnaes, which depicted Cruz holding two dancing monkeys on leashes. The headline was, "Ted Cruz uses his kids as political props."

Cruz recently featured his daughters in a Christmas infomercial spoof where he reads them fake Christmas stories, including "How Obamacare Stole Christmas." In it Caroline reads a passage from a pretend book about Hillary Clinton's emails, and Caroline asks her father to read a book titled "The Senator Who Saved Christmas."

Ann Telnaes's cartoon sounds stupid -- using kids as political props is exactly the 1154th most offensive thing Ted Cruz did last or any week -- and the reaction to it sounds stupid, and Meghan McCain DEFINITELY sounds stupid, but we kind of love those little Cruz bebes, what with the nose-picking and being such jerks.