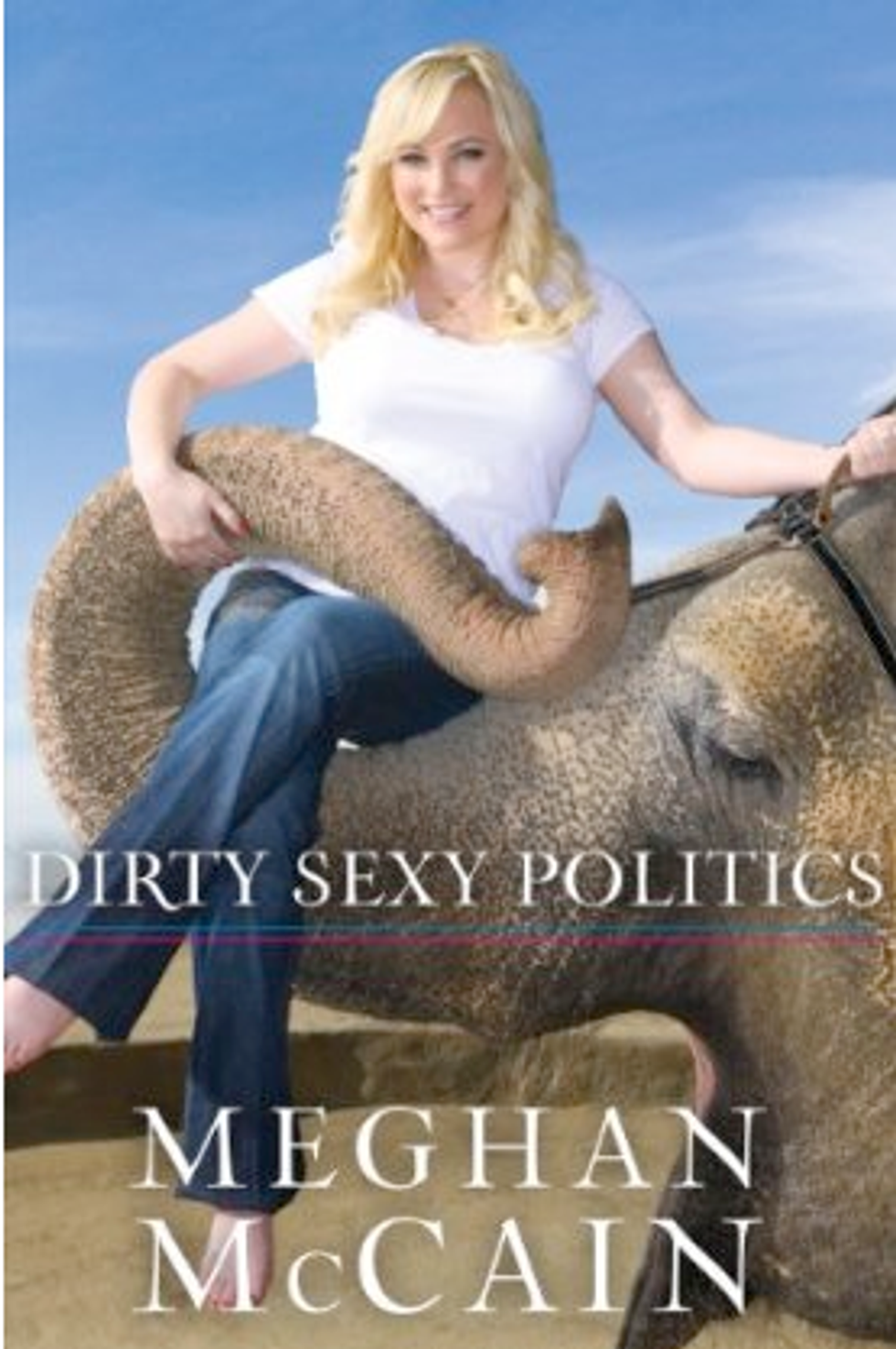 And what has the politics biblioburro brought us this week? Why, it’s Dirty Sexy Politics by Meghan McCain, America’s flaxen-haired princess of dirt and sex and politics. Meg is a Renaissance Woman, you see: heiress to beer treasures, daughter of ancient sea beast John McCain, Twitress, columnist for Tina Brown’s Internet bestiality mag, plus an author of a children’s book and now of this scorching campaign trail exposé. Dirty Sexy Politics chronicles the adventures of Meg and her "McCain Blogette" staff on the 2008 campaign trail, where they rode from Holiday Inn to Holiday Inn on the back of an obliging elephant (lewdly pictured on the cover and back of this book). The book contains many surprises, revelations, and memorable scenes. Best of all: YOU'RE in it. We mean this literally: Meghan writes about you, the Wonkette commentariat.

We'll get to the Wonkette sex scene in a moment. First, let's think about the wider literary context in which Meg is writing. The campaign trail and convention chronicle is a great and hilarious sub-genre of American literature. Mencken did it, Vidal did it, Hunter S. Thompson did it in his rambunctious classicFear and Loathing: On the Campaign Trail '72. Even better, in your reviewer's opinion, is a book called American Nomad, in which excellent and under-appreciated L.A. novelist Steve Erickson uses the dull 1996 election to write a stunning/funny/weird/prophetic mediation on the American subconscious. It also has an elephant on its cover! How does Meghan McCain fit into this tradition?

She begins with a mini-essay on something called "crazy-sex," which isn't the same thing as crazy sex. Or maybe it is:

Each day of togetherness on a campaign, stuck on a bus or airplane, listening to one more stump speech, brought you closer and closer until, very slowly over time, even the most boring campaign drones and journalists started to seem attractive. Campaign goggles can distort reality very powerfully and are the cause of almost all crazy-sex and other campaign hookups.

Meg says she didn't engage in any of this "crazy-sex" during the campaign, but "Stories abound, and I'm sure you've heard some, about how wild and raucous and lusty political life can be, especially during a Presidential election."

Well no, Meg, we haven't heard the stories. That's why we're reading your sex-politics book in the first place! Why are you so maddeningly non-specific here? Come on, DISH.

We do hear about some lady journalist who drank too much and engaged in all manner of embarrassing flirtation and "hookups," but we're given no clues as to who it might be. (Helen Thomas?)

Anyway, at some point Meghan decided to document her Pop-Pop's campaign on a blog, with the help of her buddies Heather (unruffled, serene) and Shannon (hot, tattooed, Korean) and their trusty Republican elephant transport. Not everyone appreciated this new "McCain Blogette" experiment, however. Among the detractors was a certain sinister web pamphlet:

A Washington, DC-based gossip blog called Wonkette was the first to have a go. The screaming headline said it all: "JOHN MCCAIN'S OTHER DAUGHTER HAS A LAME BLOG!!!"

Horrified, I scrolled down to look at the reader's comments, hoping people would have written in to defend my mom or me. But their remarks were even worse, a dark pit of meanness, mostly about me. Readers had said things like: "She makes the girls from the Baba Bing club look fresh," referring to the strippers on The Sopranos. Yeah, real nice stuff.

There are a lot more memorable scenes, surprises and revelations in Dirty Sexy Politics. Cataloging them all might require a list (and a ten-billion-word blog post):

There's a lot more: a night out in Nashville slamming whiskey with popular country feller John Rich; the realization that her father's campaign created a monster and dragged it out of Alaska to terrorize the whole world; and an odd chapter about a White House tea party with Laura and Jenna Bush that people think is important for reasons your reviewer can't quite decipher. The turning point of the book is when Meg's wacky antics -- her blogging, her "stripper blond" hair, her swearing, her posing with a Bud Light in GQ -- get her kicked off the campaign. And then Sarah Palin and her fertile brood come along and soak up all the airtime and attention. This is when the scales fall from Meghan's eyes and she realizes that the GOP doesn't have room for non-pregnant blond people in New York.

Meghan ends Dirty Sexy Politics with a call for the Republican Party to reach out to gay people and the young. She prays for the ghost of Barry Goldwater to rise from the Arizona sands and restore "the party of freedom and the individual," says something about how she's socially liberal but still likes war/militarism, etc. Why doesn't she just join the Democrats, then? Ha, you're right: the Democrats aren't THAT socially liberal.

Anyway. The book doesn't quite deliver on its promise of dirt and sex, but there's something delightful on every page!