Megyn Kelly Lets Kim Davis Yammer About Jebus For A While 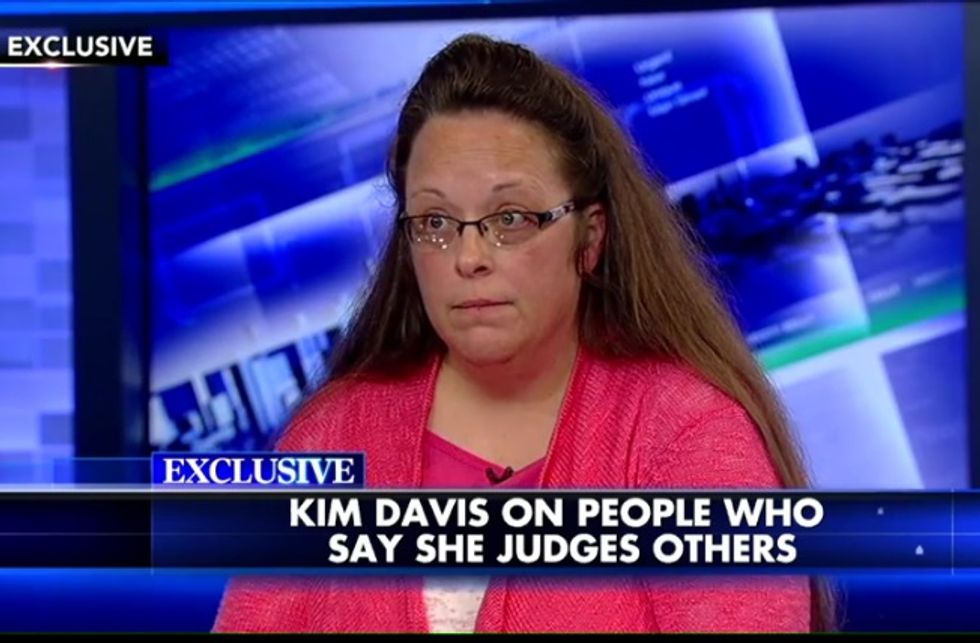 We've seen that look before, and it was on Dana Carvey's face

Megyn Kelly treated Kim Davis, the Rowan County court clerk in Kentucky who won't issue marriage licenses for fear of getting sodomy all over her, to the full Fox News Exclusive Interview treatment Wednesday night. Kelly was in top nodding-and-empathizing form, and Davis was exactly the tearful oppressed Christian lady we've come to know and roll our eyes at a lot. Davis didn't say much that we hadn't heard before, and Kelly mostly pitched softballs at her, which was probably kind of offensive since Davis does not believe in those, or in Subaru wagons either.

In the first segment, we get a wonderful bit of sanctimony. Kelly asks Davis whether she believes she comes out of this story as a "villain or heroine," and her answer JUST MIGHT SHOCK YOU:

OK, we are joking: You won't be shocked at all. "Just depends on whether you love God or not, which side I'm on." There's not a lot of discussion of the Supreme Court decision here; instead, Davis explains once more that "it's never been a gay or lesbian issue for me; it has been about upholding the word of God and how God defined marriage from the very beginning of time." This might have been a good place for Kelly to have asked if Davis understood that a county clerk is not a Minister of the Lord, and that licenses for civil marriage aren't actually a religious ceremony, but instead, she asked why Davis didn't resign if she couldn't do her job.

If I resign I lose my voice. Why should I have to quit a job that I love that I'm good at? They can accommodate for all sorts of other issues and we ask for one simple accommodation and we cannot receive it. It just doesn't seem right.

Ooh! Ooh! We can follow that one up! A county clerk's job is not self-expression, how about that? There are lots of jobs where your voice is utterly unimportant. If you want to express yourself, try blogging, maybe.

Part Two of the video has Megyn in Tough Questioner mode, asking Davis why she feels entitled to deny one bunch of sinners marriage licenses when she herself has been married four times. Not a problem, Davis replies, because she's been washed clean of her sins, so she doesn't have to be perfect. She's not judging anybody, she insists; she simply can't do a thing that Jebus told her she can't do (and again, Kelly misses the opportunity to mention that Jesus says nothing about homosexxxicans, but is quite voluble on the evils of divorce).

Davis also explains that she's not concerned about a slippery slope resulting from a hypothetical judicial or legislative exception giving her the right to not do parts of her job that are icky in the eyes of the Lord. You see, God only prohibits same-sex marriage, and so a Catholic refusing to grant a license to a divorced person who hasn't had an annulment would not have any standing at all, duh. Pressed on whether government workers of other faiths should also get a pass on doing their jobs, Davis blithely ignores the question to emphasize how Christians like her are being oppressed:

Glad we got that cleared up! Also, we learn that when she was in jail, she spent most of her time praising God, so maybe part of the reason she got out so quickly was that the jailers begged the federal judge to please please please take the loud crazy lady off their hands.

On to the last bit, where we learn that if her own kids turned out to be gay, Kim Davis would love them dearly and refuse to issue them a marriage license, just like she did her imaginary gay friend:

Also, too, she thinks it was really mean of U.S. District Court Judge David Bunning to "force and coerce" her deputy clerks to issue marriage licenses, even though she had already told them they very definitely were not legally allowed to do so without her permission. Once that holy job was taken away from her by Bunning, she told them that they faced their own moral dilemma now: "I told them that my conscience is mine, and yours is yours. You'll have to make a decision. I love you all, and I will not lead you like sheep to the slaughter."

That doesn't sound like a particularly fun office to work in. Then it was time for Davis to explain what she'd learned, and what she'd learned was that one person who stands up for God can make a difference, hooray for America and God, the end.