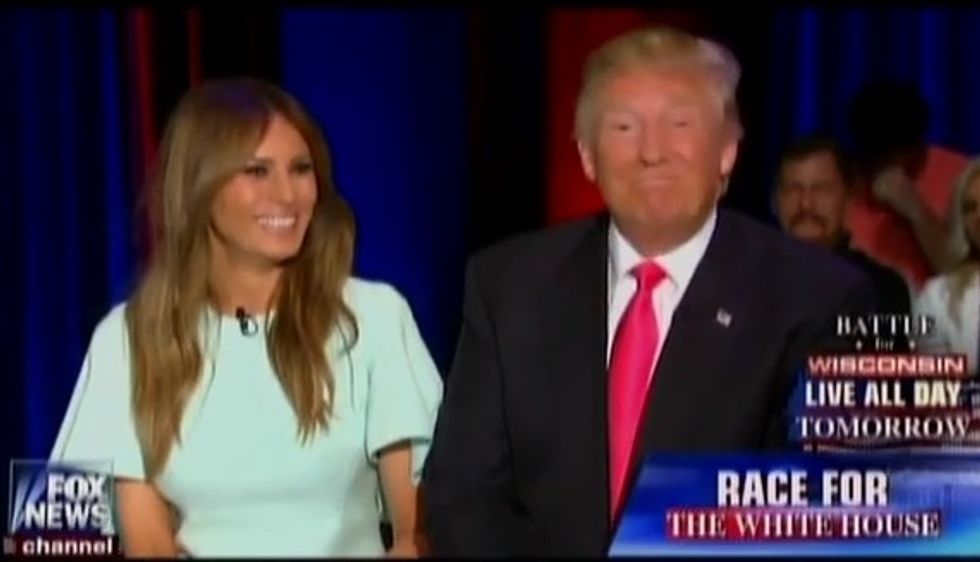 On left: Melania Trump. On right: NOT HITLER.

Oh goody, there is a new Melania Trump interview! We actually mean that for serious, because we firmly believe Donald Trump's wife is probably WAY cooler than his wrinkly orange ass. The interview is in DuJour News, and in it, she explains that she has never fucked Hitler, did not marry Hitler, and did not kill Hitler, because he died before she was born:

When I mention that the comedian Louis C.K. flat out compared Trump to Hitler, Melania stares blankly back at me. [...]

“We know the truth. He’s not Hitler. He wants to help America. He wants to unite people. They think he doesn’t but he does."

Blah blah blah, buncha shit about how she basically agrees with Donald on immigration, but maybe he could say it nicer. She's said that before.

[wonkbar]<a href="wonkette.com/599395/donald-trump-didnt-know-acting-like-hitler-was-going-to-be-some-big-problem"></a>[/wonkbar]So it's all good. Donald Trump is not Hitler. (OR IS HE?) Maybe the journalist should have asked her to clarify if Donald Trump is Mussolini or Stalin, but we wouldn't want that journalist to get a bunch of death threats like the lady from GQ did, after her Melania interview.

Now, we encourage you to read ALL THIS WHOLE INTERVIEW, because it's a good one. To entice you, here are Wonkette's Fave Five Tidbits from it:

Melania thinks MSNBC's Chris Matthews is a gross perv, but then again, BOYS WILL BE BOYS.

“Unbelievable,” she says of Matthews’ comment. “That’s what I’m saying! I’m not only a beauty, I’m smart. I have brains. I’m intelligent.” She exhales, adding: “I would just say, Men will be men.”

And men are pigs. By the way, she seems to have the same attitude about all her husband's gross sex talk about ladies, including his own daughter. SILLY BOY!

She tells her apple-headed vagina mouth husband his business when he needs to be told it.

“To be married to my husband, to someone successful as he is, he needs somebody who will tell him the truth. Somebody smart, you know. [...] I give a lot of advice to my husband and tell him how it is and how I see it. I’m not backing off. I tell him the truth.” She also reveals that she’s the one in the family who has his ear. “After a speech, the kids are calling me—Ivanka, [his] sons—saying, ‘Call dad and tell him this and that. He’s listening to you.’ They know I would talk to him and put him in the right direction. Sometimes he does, and sometimes he doesn’t. He will decide what he does.”

When was the last time you challenged him? I ask.

“This morning!” she says, letting out a big laugh. Was it about something political? “No, something else,” she says, almost giggling. “I cannot say. It’s too private. He was upset about some stuff, and I said, ‘Hey, wake up! You did it. Now deal with it.’”

We do not even want to know about what kind of "private" fuck-ups Melania has to yell at Donald about. They probably involve his mangled tangerine stump of a penis, though. PROBABLY.

Melania Trump is just like us! She went to Crate & Barrel when she was a young thing and got some furniture from there! AWWWW!

This is cool because Melania is talking about how she legit made her own way, before she fell into that fartsack's wealthy arms:

Soon she rented her own apartment, a small one-bedroom that felt like a declaration of independence. “The rent was $2,500 a month,” she says. “I picked it out, everything on my own. I still remember, I went to shop for a TV and an air conditioner. I bought furniture.” Considering the Louis XIV aesthetic of her Trump Tower residence, I wonder what her taste was like in her twenties. Where did she shop for furniture? She thinks about this for a second before she finally remembers the name of the store. “I went to Crate & Barrel,” she says. “Does that still exist or no?”

It does, Melania! It is like down the street from your house, girl! You can go to it! Here, look at Google Maps:

Michael Jackson once tried to stick his tongue in her mouth.

Yuck. Sorry if you are still mourning Michael Jackson, but blech:

"Just after dinner, we were chatting on the sofa and my husband went into another room to see some art somebody wanted to show him.

"And Michael said to me, ‘Hey, when Trump comes back, let’s start kissing so he will be jealous!’ ” They didn’t kiss, she says, “No, no, no. But we were laughing so hard.”

Awwww, that sounds like a fun memory. But ew. Now if the story was about Prince, on the other hand ...

Before Donald announced his candidacy, “I said to him, ‘You really need to think, because our family life will change.’ The three of us will change. I know what it takes, traveling and all that stuff. I told him if he really wanted to do that I would support him 100 percent. But I would also be a mom first, I would be with our son, I would be home. Our son needs parents, and I don’t want somebody other than me taking care of him.”

So, Melania sounds like a very nice lady. She might even be a good First Lady! But not if she's married to Donald Trump, fuck THAT noise. Maybe Hillary can divorce Bill and marry Melania or something LOL just kidding.