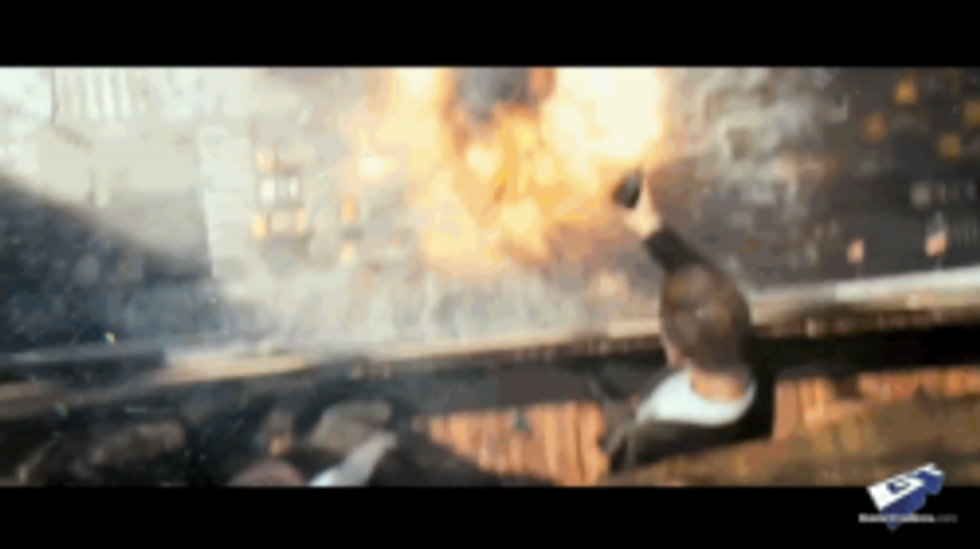 NEW YORK—The eagerly awaitedTime magazine Person of the Year award is out, and we just want to say what an honor it is to have received this award for an unprecedented second time. Time gave the nod this year to "The Protester," i.e. us, the editors of The Gifzette, who attended a handful of Occupy Wall St. protests this year. We're very excited to set this award on our mantle right next to the one we got in 2006 just for having a blog.

So the government is busy intruding on areas of our privacy that aren't our womb or our marriage again, as the National Transportation Safety Board announced yesterday its recommendation that US states ban the use of all electronic devices while driving. Conservative commentators, meanwhile, are naturally failing to see the safety difference between legitimate cognitive distractions and switching the dial on the radio. Jokes on us, though, for expecting people who don't often demonstrate much command of the fundamentals of cognition to be capable of teasing out the subtleties of cognitive differences.

Fourteen Democratic senators are asking for answers from the Obama administration after the latter's shamefully stupid decision to restrict access to the Plan B emergency contraceptive. "We ask that you share with us your specific rationale and the scientific data you relied on for the decision to overrule the FDA recommendation," write the senators, and as Greg Sargent notes, it "puts the administration in an awkward spot," because it either "produces a scientific rationale that’s acceptable to these Senators, which will will be extremely difficult at best, or it will face more criticism for failing to justify its policy, reinforcing the sense that this Democratic administration abandoned science and put politics first." We're not sure if they're putting politics first or just putting irrational cultural judgments about young women having sex first, but sure.

Attorney General Eric Holder gave a pretty big deal of a speech last night in Austin, TX, taking on Republican efforts to "prevent ballot fraud" by, in essence, imposing a poll tax. Voting rights, Holder said, "must be viewed not only as a legal issue but as a moral imperative," and, really, it just makes us happy whenever someone picks a fight with conservatives by quoting Immanuel Kant.

Anyway, remember the aughts? God they sucked so hard. Bush, Cheney, Perle, Wolfowitz, all those clowns in positions of power? All of them just SO PSYCHED to drop bombs on everyone? It was the worst! Thank god they're all gone. Because if they were still around we might be bombing Iran already because of that drone thing!!

Sane people the world over already suffering from heightened blood pressure levels less than a month out from the Iowa caucuses are rejoicing at Donald Trump's decision to bow out of that crazy presidential debate he wanted to host that only two of the Republican contenders were crazy enough to want to attend in the first place. But stay vigilant, people, because Trump claims he only pulled out so as to retain the option of running for president as an independent, i.e. he's never actually going away god help us all.

We're now just a day away from the next round of hearings on the Stop Online Piracy Act, so look forward to another round of insufferable people on the internet who otherwise can't be bothered by government to suddenly take up an interest in policy.

Well thank god Newt Gingrich—with all of his crazytalk about moon colonies and space lasers—isn't the only person talking about outer space, because yet another fabulously wealthy private investor has decided to do the right thing and fill the shoes left so tragically vacant after the United States stopped being in awe of outer space (except for that one time George Bush brought up Mars in a State of the Union—that was good). This time it's Microsoft co-founder Paul Allen, who's building an enormous plane—reportedly so huge it will make the Spruce Goose look like a balsawood party favor—that will be capable of delivering satellites and maybe even people into orbit. It's not set to have an operational launch until 2016, so we've got at least four years before Newt starts sending inner city kids who don't have an appreciation of a hard day's work to go toil in his moon mines.

Um, right, so this is terrifying? Basically: methane gas? Way worse for the environment than carbon dioxide! 72 times worse, to be precise. And there are hundreds of millions of tons of this really scary stuff hiding under Arctic ice sheets, ice sheets which (you guessed it) are all melting. The Independent quoted scientists who know about this stuff using words like "dramatic," "astonishing," and "unprecedented" to describe the current rate of methane release.

John Boehner, naturally, responded to the latest disturbing chapter in the history of climate change by holding a middle class tax cut hostage to more drilling.

Speaking of Newt, we found this absolutely hilarious: Joe Lieberman begged to differ yesterday with Newt's characterization of the Palestinians as an "invented people." Lieberman had this to say: "The important fact is that the Palestinians are a people today, and any resolution of the conflict between the Israelis and the Palestinians has to be between two people, two nations." So, you know, memo to Newt: when Joe Lieberman is being more reasonable than you on Israel-Palestine, it's probably time to find your way back to the reservation.