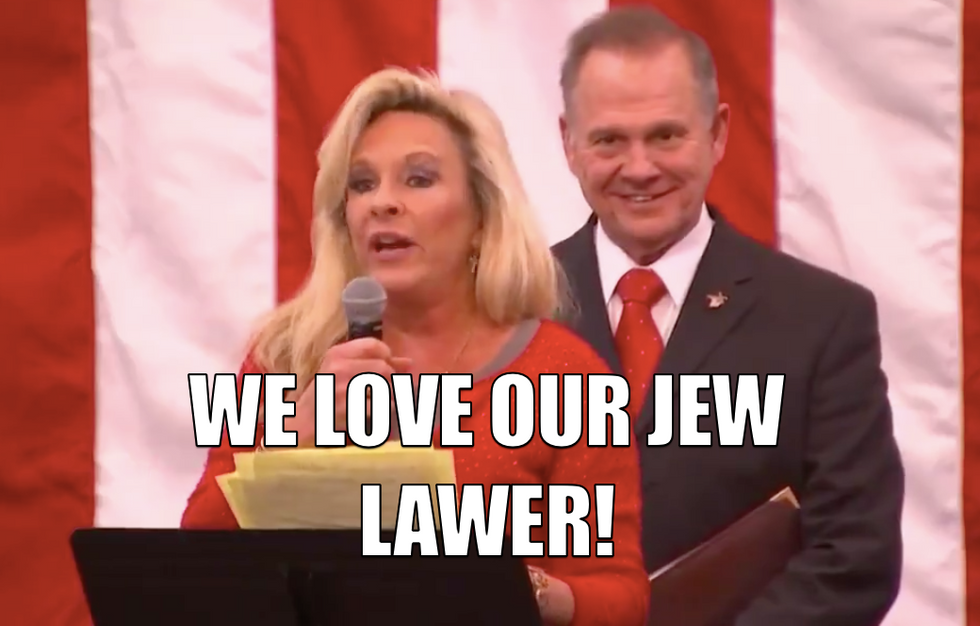 SHALOM! It's your friendly neighborhood Jewish lawyer with a PSA for the holiday season. Please don't do this! Like ever.

Why yes, that is Alabama Senate candidate Roy Moore's lovely wife Kayla proving that the Moores can't be antisemitic because they have a JEW LAWYER.

Fake news would tell you that we don't care for Jews. I tell you all this because I've seen it all and I just want to set the record straight while they're here. One of our attorneys is A JEW. We have very close friends that are Jewish and rabbis, and we also fellowship with them.

Well, case closed! Dayenu! Good thing you actually wrote that zinger down on your notepad so you wouldn't forget to school the national media on how you DO TOO have a Jewish friend.

Actually, that was sarcasm. My people are sarcastic. It's a side effect of eating too much pickled fish. And being told that we're un-American and destined to spend eternity burning in hell.

Soros is certainly trying to alter the voting populous. That's true. He's pushing an agenda. And his agenda is sexual in nature. His agenda is liberal and not what Americans need. It's not American culture. Soros comes from another world that I don't identify with. I wish I could face him, face him directly. And I'd tell him the same thing. No matter how much money he's got, he's still going to the same place that people who don't recognize God and morality and accept his salvation are going. And that's not a good place.

But Mazel Tov to the Moores on finding a good JEW LAWYER who isn't spreading that liberal sexual agenda around Alabama's holy places like the Gadsden Mall.

WHOOPS! There goes that sarcasm again! Please forgive me, I'm lactose intolerant. It's a plague of my race. In all seriousness, it's good that the Moores finally hired a competent lawyer. Because that other guy, the very extremely heterosexual one, well ... I'm not saying he's a moron. But if he were twice as smart, he'd be an idiot.

Oh, was that mean? Maybe we need to fellowship together so I can learn to be more godly. You can tell me about Mary being a teenager when she married Joseph, and I can explain how tax fraud is both a crime and a theft from the poor.

Anyway, sorry this JEW LAWYER won't get a chance to fellowship with y'all in person. But since tonight is the beginning of Chanukah (a holiday celebrating zealotry if there ever was one), please enjoy this song celebrating the melding of our two cultures. Your American one and mine from "another world." Hoping for a Chanukah miracle tonight in Alabama! Roll Tide Roll and L'Chayim!