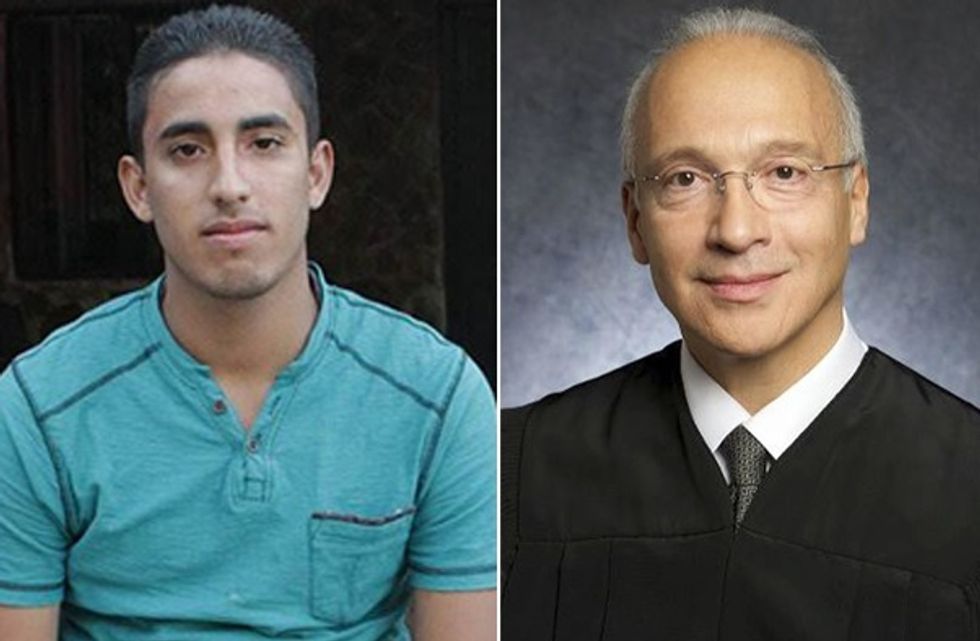 Aren't there any AMERICANS in the judicial system?

It's not exactly as ironic as rain on your wedding day, but close enough for Alanis Morissette to maybe sing about: A lawsuit filed by lawyers for Juan Manuel Montes, the 23-year-old guy who should have been protected by DACA but was deported anyway in February, has been assigned to U.S. District Judge Gonzalo Curiel, the judge in one of the Trump "University" class action lawsuits. Yes, the same Gonzalo Curiel who Donald Trump had multiple public hissy fits over last summer because the Indiana-born federal judge was "Mexican," and therefore obviously too biased to give Trump a fair hearing.

Donald Trump continues to be very unhappy about the terrible travesty of justice in the biased, unfair, and totally unjustified lawsuits against his "Trump University" scam.

Trump ended up settling all of the lawsuits against Trump "University" for $25 million, so it stands to reason he'll be just peachy with Judge Curiel presiding over a case that makes Trump's immigration policy look cruel and arbitrary. We certainly can't imagine he'd take time out from his busy job of leading America and dealing with multiple foreign crises just to have some kind of meltdown or send a bunch of Tweets suggesting a conspiracy is afoot. Couldn't possibly happen. That would be as ridiculous as a presidential candidate going off on a series of racist tangents just before his own nominating convention, accusing a judge of being impossibly biased simply because of his heritage -- while not bothering to formally file a motion asking for another judge. See? Not gonna happen.

Remember How Trump Promised Not To Deport Any DREAMer Kids? Yeah, About That... :(

The New Cruelty marches on.

Montes, you'll recall, was rushed across the border in February after a Border Patrol agent nabbed him in Calexico, California. He'd left his wallet in a friend's car, so he couldn't show his ID or his paperwork showing he was currently enrolled in DACA -- the one program the Trump administration has promised will still protect people from deportation, because Donald Trump has such a big heart. But the Border Patrol goons wouldn't let Montes retrieve his ID, and convinced him to sign paperwork allowing him to be deported immediately. Montes, who suffers from learning disabilities due to a childhood brain injury, didn't even know what he was signing. To make matters worse, after being mugged in Mexcali shortly after being dumped there, Montes tried to go home, and was then arrested as an illegal border crosser, and a Very Bad Hombre.

Now living with an aunt and uncle in Mexico, Montes is being represented by lawyers with the National Immigration Law Center, who have filed suit to force Homeland Security to release all their records on his arrest and deportation. That case has been assigned at random to Judge Curiel, purely by coincidence, in accordance with the rules for the Southern District of California:

Kari Hong, an assistant professor at Boston College Law School who used to be an attorney in California, said judges are selected based on a rotating schedule. The court sets up a list of available judges and they are assigned each case as they come in.

You can hear the gears turning in Trump's head, can't you? But...but...this is the judge Donald Trump already said was too biased to handle another lawsuit, because he's Messican, and Donald Trump's going to build a beautiful wall to keep Messican terrorists and murderers like this learning-disabled DACA guy from ever getting into the USA! Are Messican judges even allowed to rule in cases involving other Messicans? Everyone knows only white judges can be objective (preferably, all judges would be male and Republican, but we haven't fixed some flaws in the system yet). Shouldn't Curiel have to recuse himself for having a conflict of interest?

Probably not, says Hong, who explained that having been yelled at by a guy with weird hair doesn't count:

"Simply being attacked by the President isn't a conflict of interest. If that were the standard, the entire 9th Circuit Court of Appeals couldn't handle a single case," she said, referring to the San Francisco-based appeals court that shot down Trump's attempts to institute a travel ban against six majority-Muslim countries.

Well, crap. If you can't make a judge in a federal case go away simply by yelling at him, then where the hell is justice anyway?

Yr Wonkette is supported by reader donations. We won't feel at all conflicted if you click the "Donate" linky below this story. How's that for unbiased journamalism with value-added dick jokes?