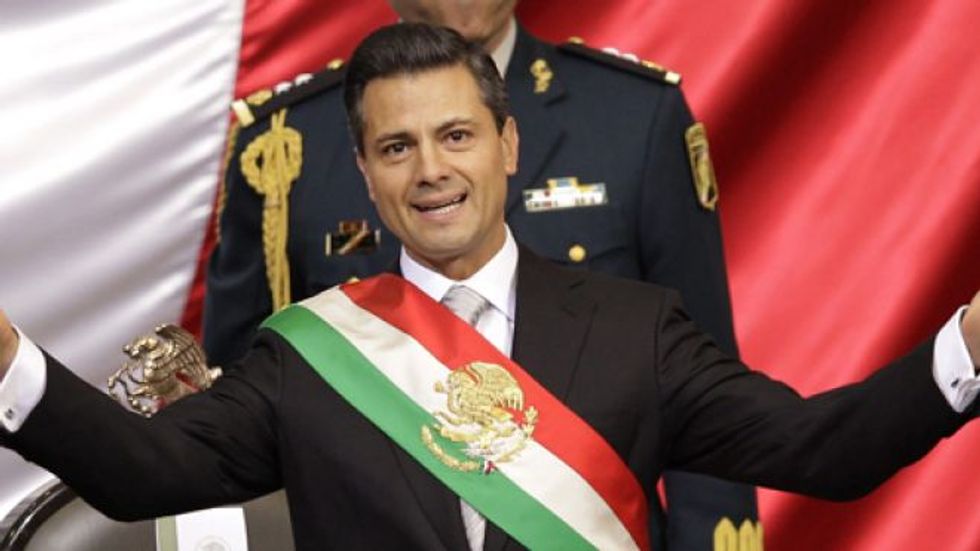 There's nothing spicier than our favoriteallegedly gay, allegedly wife-murdering and allegedly elected Mexican president, Señior Enrique Peña Nieto. How has he fared in the first year of his stolen office?

FABulously!drools Michael Barone, senior political prestidigitator at The Washington Examiner, resident goodfella at the American Enterprise Institute and, of course, Fox News gasbag. Peña Nieto is such an "efficient reformer" that there is no more drug violence! That whole idea of people being gunned down in the streets by narcotraficantes is "out of date." He's kinda, sorta rii...ght about this part. With decriminalization of pot in the US and neighboring Latin American countries, some cartels, like the nice boys of the Knights Templar cartel in Michoacan, are diversifying from drug violence to iron ore exporting and thuggery. That should make international investment coffers open wide for chunky.

And what about all those illegals that were flooding the USofA and tekkin' are johbs? Why, why... that number has "fallen to zero"! This amazing "fact" is backed up with a broken link to a Pew Research report, which showed, if Barone had actually linked to the report, that "The sharp decline in the U.S. population of unauthorized immigrants that accompanied the 2007-2009 recession has bottomed out, and the number may be rising again." Hmm. So surprised he is telling a mistruth, what with that long list of esteemed organizations he belongs to.

And what else is he postitulating? Sexy, sexy investment money is flowing into Mexico from greedy shysters across the world, hoping to rob the country of all its riches, in the name of Profits! And because of these charitable efforts, Mexicans are driving pickup trucks and SUVs to Walmart and Costco shopping malls! Whether they get out of their cars or not, he does not say. But they have CARS! And they are DRIVING!

Oh and Michael, you actually had los huevos to compare Mexican politics to the "calendrical regularity, elaborate ceremony and human sacrifice" of the Aztecs? You flay me!

But what about Peña Nieto's spicy butt sex and wife murdering rumors, you ask? Not a whisper. That I could find. Sorry! But he sure has been busy rubbing up against industrialists and giving American capitalists and Chinese commie-capitalists erections. So let's have some verdad about all these "reforms" Peña Nieto has been making. We can start with one of his controversial energy reforms, like how he's inviting outsiders to enter Mexico's soft, verdant love garden, drill deeply past her crusty exterior and frack her, frack her hard.

This very nice bi-lingual video from Frack U will tell you all about it. It has a girl in an American flag bikini who inserts an electric drill into a coconut. Then pushes it in and out. It has an American Cowboy downsplainin' to many Mexicans, in appropriately Gringo Spanish (with English subtitles), how letting the US frack them is muy muy bueno. Hopefully, some of those SUV-pickup-driving, Walmart-Costco-shopping Mexicans will pause from their newfound capitalist freedoms, watch this video, then rise up and demand they at least be kissed before they're fracked.