Michele Bachmann Getting In On Some of That Bus Tour Action 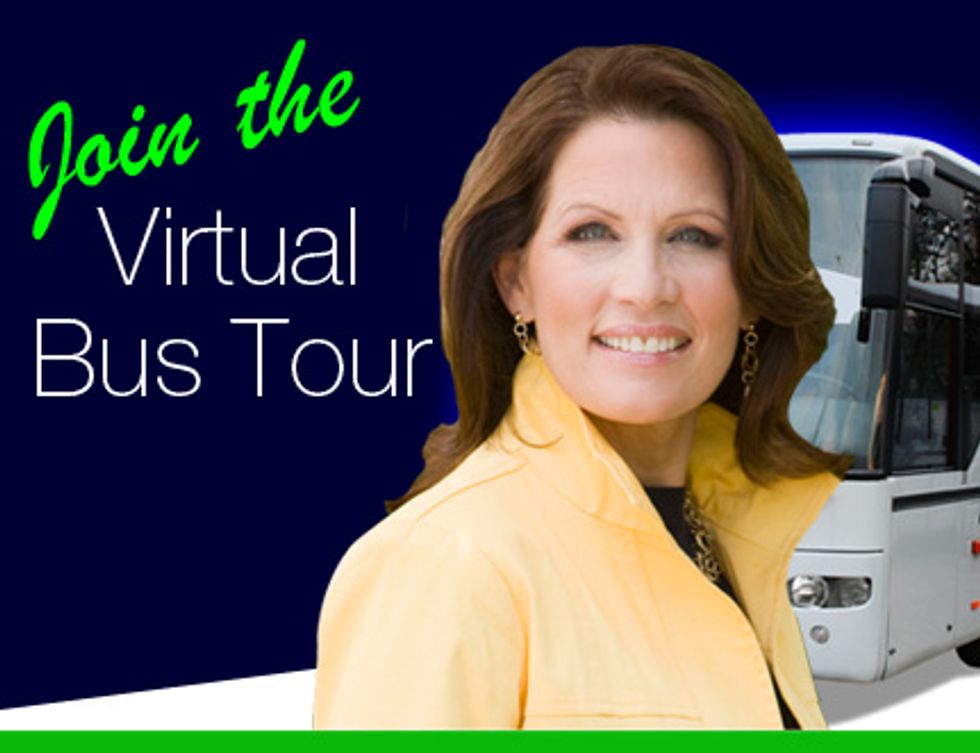 OH NO WATCH OUT MICHELE BACHMANN THERE'S A BUS BEHIND YOU! Oh, LOLZ, just kidding -- that beautiful luxury coach in the back is the Minnesota Congresslady's own special tour bus to ride around her district in, shaking her moneymaker to replenish the ol' campaign coffers. She liked theSarah Palin and Tea Party buses, and heard about Joe Wilson's new bus full of jobs, and just had to get a ride of her own. Bachmann's new ride has personalized features, such as windows made out of a special kind of glass to deflect Nancy Pelosi death stares and anti-U2 Boat reinforcements. Oh looky she's TWEETING PICS FROM THE ROAD.

On her official "Bachmann for Congress Bus Tour," Our Lady of McCarthyism is "speaking with small business owners and concerned regarding the current struggles facing the American economy." Hey, that agenda sounds familiar! Here she is holding a cupcake with some sugar fairies and a Twins fan:

"Honey, is that a Vogue magazine on wheels?" says the husband to his wife, in the passenger seat. "No, Chester, that's our glorious Congressional representative on her bus tour":

Here's the full tour agenda, courtesy of Minnesota Public Radio. Rumor has it that at some stops she will cure commoners of their liberal tendencies (and leprosy, if anyone has it). Oh, and be sure to text "VICTORY" to get special secret missives from Bachmann herself (Examples: "I see the U2 Boats coming. Gonna hide inside my tour bus freezer full of TAB now"). [Michele Bachmann's website/Minnesota Public Radio]