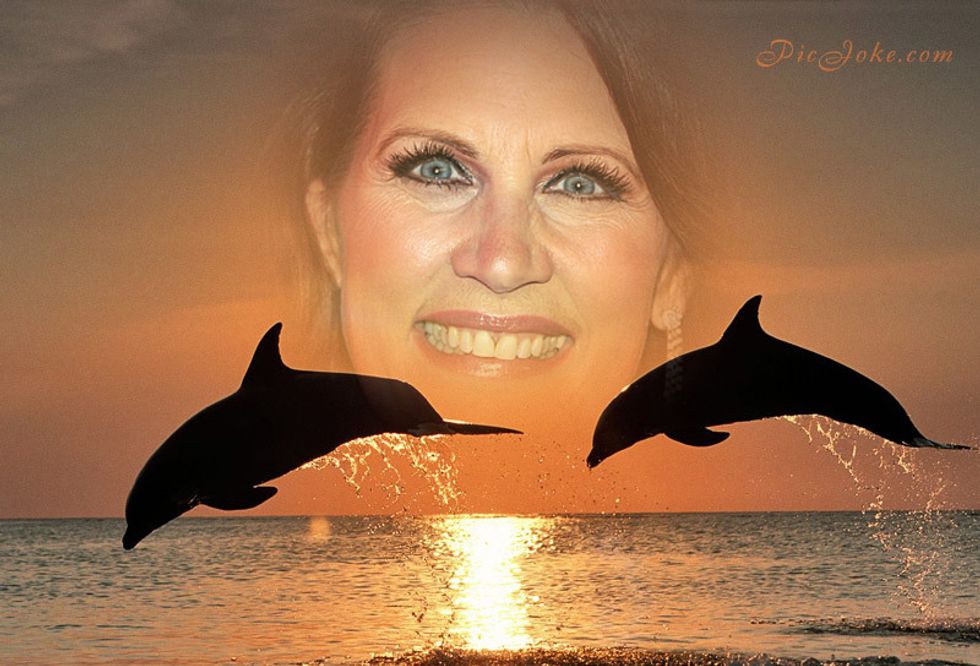 Michele Bachmann is a very lucky person! Not only does she have a direct line to God, who makes clear to her what he wants at all times, but she is also a wealthy white woman who can talk all about that without being as harshly judged as she might be if she were a random weirdo sitting next to you on the bus.

In an interview with The Brody File, which is some show on the Christian Broadcasting Network, Bachmann explained that she was pretty sure that God himself "raised up" Donald Trump to be the President of the United States of America.

I actually supported Ted Cruz. I thought he was fabulous but I also see that at the end of the day God raised up, I believe, Donald Trump who was going to be the nominee in this election. I don't think God sits things out. He's a sovereign God. Donald Trump became our nominee.

I think it's very likely that in the day that we live in, that Donald Trump is the only individual who could win in a General Election of the 17 who ran. Maybe I'm wrong, I don't know but I do know that the Bible is true and that Daniel teaches the most high God, which is one of God's names, is the one who lifts up who he will and takes down who he will.

That is pretty interesting logic! Especially because we would not imagine that Bachmann would suggest that God "raised up" Barack Obama, even though he was elected president twice. How does this Book of Daniel stuff work, anyway? Does it just apply to Republicans? I guess it would have to!

I mean, I don't exactly have a great understanding of God or the Bible here -- although my mom did once try to explain the holy trinity to me by way of Chinatown (He's my father! He's me! He's my father! He's me! We're a bird!) -- but it seems pretty weird that of all the people in the whole country, God would handpick someone like Donald Trump, who does not so much seem to be a particularly holy person. He also doesn't seem to be actually be all that good at winning a general election! Heck, if I were God and I were trying to rig an election for the Republicans (as God does), I probably would have put my money on John Kasich, because people seem unable to tell that he is awful for some reason.

Also, in the interview, Bachmann talks about how much super great Jesus people like Jerry Falwell Jr. and Franklin Graham and James Dobson like Donald Trump, and how that is also a sign that he is the chosen one. Like, God's chosen one, not like he's a vampire slayer or something.

Sure, maybe! But what does this mean if Donald Trump isn't elected? Does that mean God has bad judgement? Or that he lacks the power to rig an election? I mean, that would mean that God was less powerful than Olivia Pope, which does not seem right, even though she is pretty awesome.

In another part of the interview, Bachmann concedes the possibility that Clinton could win, but that if she did, Israel's enemies would be "lifted up," because she thinks Huma Abedin is in cahoots with the Muslim Brotherhood. However, she might not want to go around saying these things, lest she upset the many virulent anti-Semites who are also hoping Donald Trump will win this election.

Of course, Bachmann does not actually have the best track record of predicting what God wants, as she had previously suggested that God wanted her to be President, and it doesn't seem like that happened.