Michele Bachmann Might Run For Franken's Senate Seat ... On A Mission FROM GOD!! 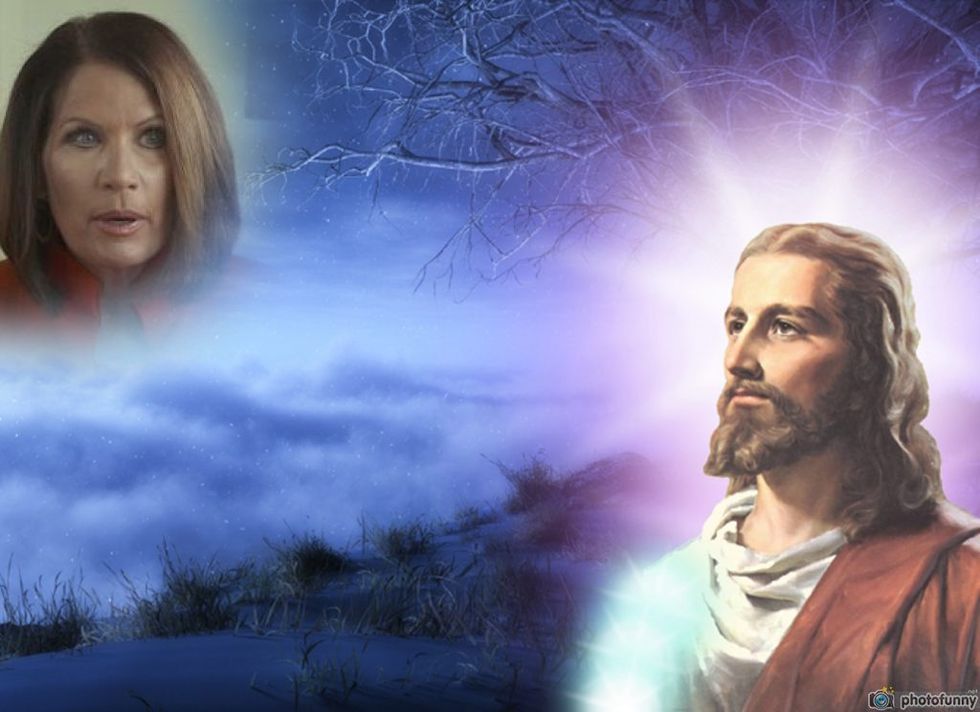 Brace yourselves! It's beginning to look like we may have Michele Bachmann to kick around once again. For a little while anyway!

In an interview last week with the late Tammy Faye Bakker's husband, Food Buckets McWirefraud, Bachmann said that she'd heard from lots of not-imaginary people who would love for her to run for Al Franken's senate seat -- which, after the Recent Unpleasantness, he resigned from today. However, rather than getting started on her campaign right away, she has decided to wait around for a signal from God. Like a modern-day Joan of Arc.

She's taking this decision seriously, on account of the fact that she imagines this will lead to her being attacked "by the swamp" and leave her vulnerable to lawsuits of some kind. This would be easier if she was a billionaire, she says, but she and her husband are not "money people." The Bachmann's are but poor normal folk, you know. Like so many of us, Bachmann's net worth is only 2.8 million dollars, and the majority of that is tied up in Precious Moments figurines.

As you may recall, God previously told Michele Bachmann to run for president. As it turns out, this wasn't because the world-famous deity wanted her to actually win or anything -- he just wanted her to bring attention to how Obamacare is bad.

“I trust in a big God,” Bachmann said, asserting that she “was supposed to run for president” in 2012 in order to make the the repeal of Obamacare the central issue of the Republican platform. “I feel like I was wildly successful … I didn’t win, but I moved the debate. So I didn’t shed a tear when I left the contest because I felt like, you know, I fulfilled the calling that God gave me.”

Makes sense. It's not like any of the other Republicans wanted to take health care away from poor people, except for all of them, and God probably wanted to keep his plague options open. Coming up with a plague cannot be easy, even for God, and who would want to waste all of that time only to see people survive it? Letting poor people have health care could totally ruin plans for something like that. That would be no fun at all! If God gives you a disease you can die from and no money to pay for it to be cured, then it's pretty darned obvious he would prefer you be dead. If God wanted you to be healthy, he wouldn't have made you sick and poor in the first place. DUH.

Besides, Jesus did seem pretty annoyed with all those entitled lepers that one time.

If God is once again planning for Michele Bachmann to run and lose, I am 1000 percent on board with that. It's all the fun of having her in our lives with none of the risk of having her be in charge of anything. Who could say no?

Now listen to God telling you it's your OPEN THREAD!

You hear that voice? That is GOD telling you to give Wonkette some money! Click here to tip us!