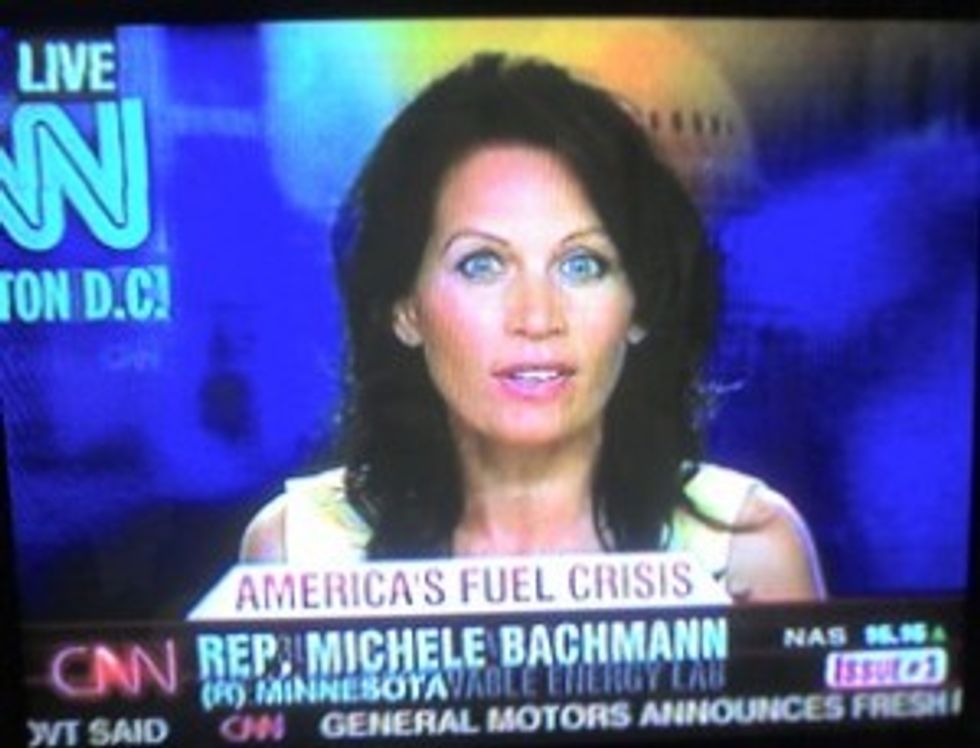 Someone has finally recognized the “Hollywood” in Congresswingnut Michele Bachmann and stuck her in a real movie! Bachmann makes her big acting debut in a brand-new Cold War propaganda film calledSocialism: A Clear and Present Danger, created by the evangelists at Coral Ridge Ministries and directed by a camera guy who's heard of James Cameron. Make way for a real star, Eclipse people!

In the movie, Bachmann plays a paranoid lunatic-lady from St. Paul, Minnesota who is trying to escape from “socialist tentacles” set loose by a band of Soviet revolutionaries played by the actors Barry Obamarov and his two dads, Vlady Lenin and JoJo Stalin. The revolutionaries and tentacles try to destroy Christianity with lies such as “the Bible’s prescription for the underprivileged is socialism.” When Bachmann’s character points out to America that there is just no evidence of that whatsoever, freedom returns.

Bonus features include dramatic music! Riot pictures! Talk of the Domino Effect’s resurgence in South America (“browns fall down, again”)! And Hugo Chavez, he’s in it, too.

Bachmann is part of a cast that includes Bible people, WorldNetDaily.com founder Joseph Farah’s mustache, and a Chinese guy, among others. Yet she’s never out-shined by these whores, so don’t worry. A few of Bachmann’s lines, as related by the cinema blog The Minnesota Independent:

“What Jesus said, ‘Render to Caesar that which is Caesar’s, and render unto God that which is God’s,’ so there certainly is a place for us to pay taxes to government. That’s legitimate. We should do that as Jesus instructs,” she said.

She continued, “But we render to God that which is God’s and the Bible calls for, approximately we are thinking of tithe, maybe 10 percent that we are giving to God, but beyond that we also give to charity. Jesus didn’t ask government to be the charity; he asks the the individual and the church to be charitable.”

For all you Cahiers du Cinema-subscribing movie buffs, Coral Ridge Ministries is a Ft. Lauderdale, Florida-based film production company whose earlier works include Aboard the Gay Express, starring Charles Krauthammer, and Uncharted and Troubled Waters -- a sci-fi action thriller comedy-drama in which Obamarov, a recurring villain-character, steals all the money from the BP Nation and gives it to homo pelicans. [Minnesota Independent]