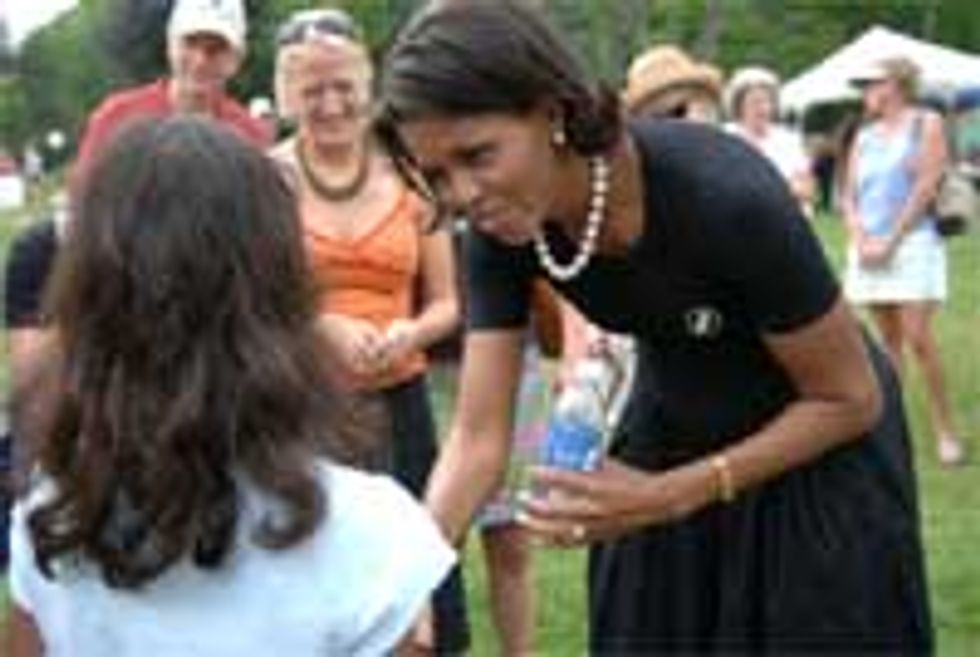 No one likes Michelle Obama because she went to Princeton and then glibly took her degree "on the road," back to Chicago, where she lived off of welfare, like a slob, up to and including this day. And she hates America! Well, Smartypants gave her "critics" -- basically, Michelle Malkin and a few other losers -- more reason to attack her today when she asked voters not to decide their vote based on, "she's cute." And as the AP tells us in an objective news report, those words were part of an evil guerilla conspiracy against Sarah Palin. MMHMM.

Here's how it went down, when Michelle Obama dissed the nice white gal running with John McCain:

CHARLOTTE, N.C. (AP) - Michelle Obama asked voters Thursday to make their choice on the issues, not because, "I like that guy" or, "she's cute."

Might she be talking about Republican vice presidential candidate Sarah Palin?

"I'm talking about me," she said with a smile.

Any number of interpretations are possible, such as the one the AP offered in the second sentence of its objective news report. On the other hand, we're hearing from Chicago that internal polling suggests a Cynthia McKinney surge is on the way, and she is one. hot. piece.

But the New Associated Press, which now operates under the rule of "objective assumptions," tells us what's really happening here:

Michelle Obama is part of a concerted effort involving her husband, his running mate, Sen. Joe Biden, and Sen. Hillary Rodham Clinton to neutralize the appeal that Palin has brought to John McCain's ticket for some female voters. They are doing so unmistakably but gingerly, so as to not appear sexist or invite another lipstick-on-a-pig tempest.

But, perhaps, not gingerly enough.

Jesus! There's some "truth" in here, insofar as that can be defined without actually talking to someone inside the Obama campaign, but: the word choices. "Concerted effort," "unmistakably," "sexist." Would be nice to see the evidence that went into this objective news -- for example, on what day did strategists for Obama discuss her role and the words she'd use as a pawn in this unmistakably concerted effort to target white female voters? Also: is Michelle Obama worried about carrying out her unmistakably concerted tasks "gingerly, so as not to appear sexist," when she is also a woman? Ah, right, we forgot -- there's no such thing as black women.

But that doesn't excuse Michelle Obama for calling Sarah Palin a pig, or whatever the hell happened.