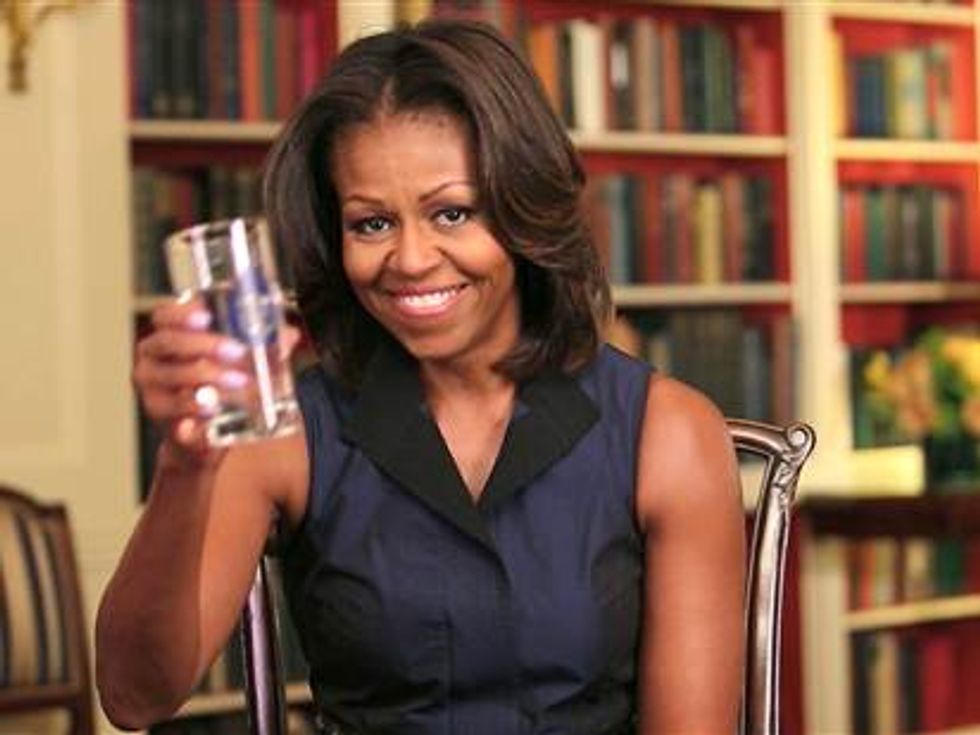 You know that jokey little joke bit of strategery some of us around here like to throw out whenever Obamz&Co come up with any kind of offering of opinion, or God forbid actual policy, and then are arbitrarily screamed at for being commie-fascist-welfare-taxer-Muslim-brothers-from-the-hood, no matter what the opinion was? We jokesters often like to posit that in response the prez should maybe come out in support of Republican ideas, like having another war (so close) or aborting things, or cuttin' all these rich people's taxes more than the less than zero they kinda pay now, or maybe just go ahead and kill Obamacare his ownself? And then maybe these haters of all things Oblackma would act like they have always been for taxing billionaires to pay for our abortion wars and we could get something done as a nation already?

Oh we have made ourselves laugh. But we are now thinking that mayhaps we were really and truly on to something? Because all Michelle Obama had to do was go out and tell some kid-folks that they should drink more water, and BAM! Water is now junk science (just like global warming) and no you should not drink it especially if she says so.

The first lady promoted her new “Drink Up” campaign earlier this week at the aptly-named Watertown High School in Wisconsin, and ever since it has been drawing far more criticism than she or anyone else in the Obama Administration could have predicted. She told students, “Drink just one more glass of water a day, and you can make a real difference in your health, for your energy and the way that you feel.” She cited “scientific evidence” that says our bodies perform better when they are “hydrated” than when they are even “just a little bit dehydrated.” And perhaps most importantly, Obama said, The truth is, we all have a choice about what we drink and when we choose water, we’re choosing to be at our very best.

First, we endorse the name "Drink Up." And secondly, as we surely did do some drinking up our ownselves in Boston this weekend, we also know that dehydration is a bitch and will make you stupid and feel like shit. So, yes kids, drink water, even though YOU HAVE A CHOICE! But with water you will feel better. NO? No.

Some conservatives have been quick to jump on Michelle Obama for her “scientific” claims, pointing to a POLITICO story that quotes experts who claim there are discernible benefits from drinking one extra glass of water a day. Rush Limbaugh called it “just more command-and-control” from the Obama White House. The Washington Times went after the “the nation’s most prominent anti-obesity crusader” for misleading the public. And the Washington Free Beacon blasted the headline, “Michelle Obama’s Drink More Water Campaign Based on Faulty Science.

Hey guys, how come no mention of all the fluoride-in-the-water = mind control? We thought you loved that one! Also, we do not believe that Politico was the first thing in the world to ever say that drinking water was a good idea? And shut up Rush Limbaugh, you picture of health and wellness, about everything always. What do you take your oxy with? Scotch? Yeah probably scotch. We also enjoy how calling Michelle Obama the "nation's most prominent-anti-obesity crusader" (just stone cold slapping food outta everyone's mouth and making them do squats y'all!) makes her the exact evil bitch who would try and make kids think drinking water is a good idea.

It is sort of neato to imagine the pavlovian effect of such words on the eyeballs of our reactionary brethren to all things Obamz. Especially when they get these trigger word feelings all mashed up into "the government will not mind-control us to drink water - real Americans should only drink big gulps with Sarah Palin! Unless you are poor! And on SNAP! And then the government should tell you bitches no." Cognitive dissonance is not so hard we guess?

Or maybe if these people are willing to go as far as refusing to "stay hydrated" because Michelle Obama said it is good for you, the administration should just run with this. Let's start encouraging people to remember to keep breathing, because breathing is good for you! Maybe some folks will try not doing that for a while and see how we like it?