Mick Mulvaney Really Has No Idea What 'Hypocrisy' Is. 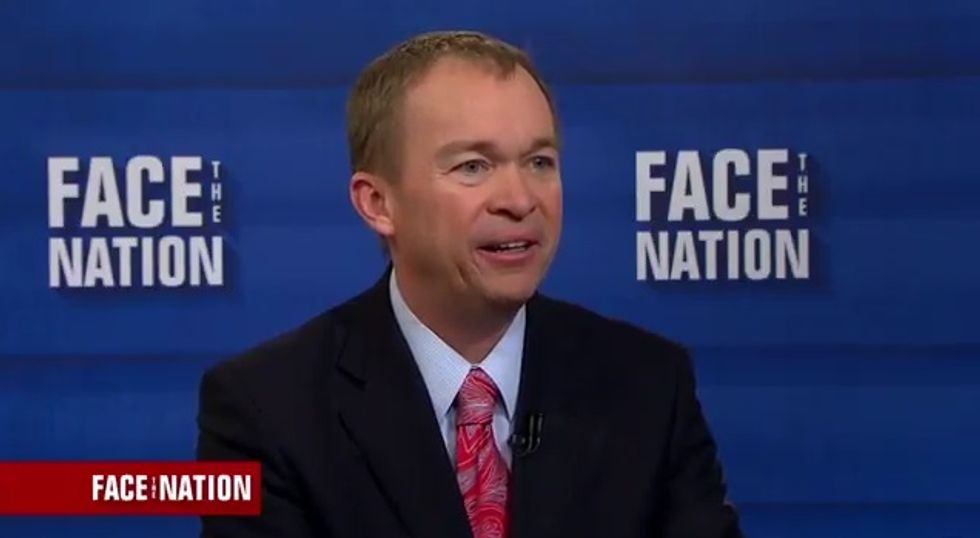 For some reason we don't trust this smiling sociopath.

OMB director Mick Mulvaney, the guy who insists there's no evidence that Meals on Wheels or school meal programs actually do any good, has a nifty op-ed piece in today's Washington Post in which he accused Democrats of "hypocrisy." Specifically, Mulvaney accuses Democrats of "hypocrisy in its purest form" when it comes to statements some have made about Donald Trump's proposal to use "rescission" -- a budget maneuver that "claws back" already-appropriated funds -- from previous appropriations for the Children's Health Insurance Program (CHIP). The $7 billion in funds, Mulvaney says, are in "two CHIP accounts that either cannot legally be spent or will not be spent under any projection," so Democrats are enormous hypocrites for saying Trump's rescission proposal would take money away from kids who need health care, and shame on them for being hypocrites. Says Mulvaney,

Instead of returning unspent funds to taxpayers, Democrats want to preserve rescissions to pay for more government spending in annual spending bills. And why? Perhaps it’s to keep a fake, inflated level of CHIP spending on the books that they can use as an “offset” for unrelated government spending sometime in the future.

Or perhaps, their “resistance” movement has become so ingrained in their party that they are simply incapable of conceiving of a world in which they could work with the president on anything.

Oh, here's a big surprise: Mulvaney's op-ed includes some very careful half-truths, spin, and, outright fibs. The sort of thing you might call hypocrisy. Imagine that! Of course, all that involves details, which are boring and irrelevant, and why would you even bother dragging those up when oversimplifications are much, much easier? So, without getting too deep into the weeds, is Mulvaney even right about any of this?

Yeah -- but only to a point: As FactCheck.org explains, most of the $7 billion in funds targeted for rescission -- about $5 billion -- are in an account whose spending authority expired in 2017. That's because CHIP is jointly administered by the states and by the federal government, and the annual appropriation often includes more than the states end up needing to match with their own funds. So some leftover funds aren't all that uncommon. But here's where Mulvaney is spinning himself in that line about "returning unspent funds to the taxpayers." Yes, there would be no impact on kids currently enrolled in CHIP. And yes, as Mulvaney argues in his od-ed, Democrats have indeed voted for previous rescissions of unusable CHIP funding, most recently in the omnibus spending bill earlier this year.

But even if the current recissions bill were to pass, ain't a penny of the rescinded funds going "back to the taxpayers," because as the budget hawks at the Committee for a Responsible Budget point out, rescission doesn't really save the government any money -- but it does work quite nicely as a "budget gimmick to increase discretionary spending" beyond the omnibus bill's "(already generously increased) budget caps."

In fact, while it's true that the Congressional Budget Office projected the CHIP rescission wouldn't result in any kids losing coverage, the "cuts" also would have no effect on the budget deficit either, since they involve money that wasn't going to be spent anyway.

Translation: The Trump administration is calling for a smoke-and-mirrors budget trick to paper over the huge deficits caused by the combination of the Republicans' Big Fat Tax Cuts for Rich Fuckwads and the omnibus spending bill, which Freedom Cockers were outraged by. Mulvaney is very very angry that hypocritical Democrats are claiming the smoke-and-mirrors budget trick would affect kids who need healthcare. So, sure, Mulvaney is half-right about part of what some Dems are saying -- but he's also spinning like crazy about the alleged "savings" to taxpayers. There are none.

Oh, but that's not all! There's actually one area where the CHIP rescission proposal could have a real effect: Trump et al also want to claw back $1.9 billion in a separate CHIP fund, the Child Enrollment Contingency Fund. The contingency fund is designed to cover states in case of a healthcare crisis that causes them to exhaust their own allotted CHIP budget for the rest of 2019. As FactCheck explains, the emergency fund can only be tapped if both conditions apply: a state has already exhausted its annual CHIP budget, and a crisis results in higher-than-expected new enrollments.

So far, since that fund was established in 2009, only three states have needed to tap the extra monies. And the amount needed was, in total, just $109 million. The rescission already included in the omnibus bill leaves $500 million in the contingency fund for the rest of fiscal 2018, and after that, more funding would normally be passed, so yes, the CBO projects there's probably enough emergency funding left for now. But that's not, as Mulvaney claims, "absolutely" going to cover any possible crisis. Plus, this is far from a normal Congress, and there's not a lot of trust left when you consider that Republicans let all CHIP funding lapse at the end of fiscal 2017.

In conclusion: Mick Mulvaney is right that some Dems have committed political spin when it comes to the impact of rescinding CHIP funds. Of course, he's spinning like almighty fuck when he claims further rescissions would save You The Taxpayer any money. We're pretty sure there's a word for that, and as the American Enterprise Institute's Norm Ornstein notes, regarding another portion of the rescissions wish list, there's bigger budget fuckery in the works than just a one-time clawback of appropriations that can't be spent anyway: Not only are the clawbacks "at best ineffectual," they also set the stage for "more moves by Trump to do damage to [the] social fabric, poor, disabled under [the] phony guise of reducing deficits."

Well, sure, but it's such pretty smoke, and they're such shiny mirrors.