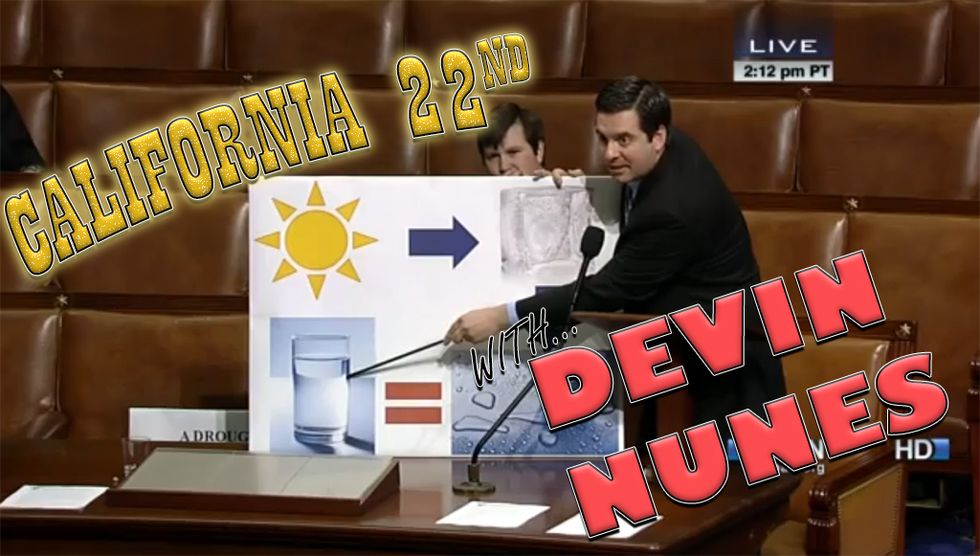 This week we're headed to California's 22nd District to pay a visit to the winner of Wonkette's 2017 Legislative Shitmuffin award, Devin Nunes.

One of the most important things to understand about California is that it's big. Really big. You just won't believe how vastly, hugely, mind-bogglingly big it is. And, one of the biggest issues affecting Californians is water. There simply isn't enough of it to support the vast number of farms and cities, and that's lead to rationing during increasingly-frequent droughts. Both the farmers and the cities have equally valid arguments. Cities are over-crowded and rationing disproportionately affects the large number of poor communities, and farmers need water to grow food and make an honest living, but they feel marginalized and abused by legislators. It's a complicated case, a lotta ins, a lotta outs, a lotta what-have-yous.

Your 2017 Legislative Shitmuffin Of The Whole Entire Year Is DEVIN NUNES, COME ON DOWN AND SUCK IT!

Oh Devin Nunes, YOU EARNED IT. YOU REALLY, REALLY EARNED IT.

The 22nd is very much like the rest of rural America in that it's not very wealthy, most people only have a highschool education, and there are a lot of middle-aged white people. Recently, there's been an influx of Hispanic families into the exurbs, shifting traditional demographics. This will ultimately create an interesting set of electoral circumstances in the future, but we're not there yet.

Devin Nunes has rep'd the 22nd since 2003, but he'd been fooling around in local politics long before he secured the blessings of his predecessor, former-Rep. Bill Thomas. Water rights have been a pet project for Nunes for decades, which has led to some hilariously condescending and ignorant speeches on the House floor about  the water cycle that conveniently gloss over the impact of climate change on rural farming areas.

WATER! You can't explain that!

Ever the brown nose, Nunes has been a loyal Republican since he first came to Washington, always taking the most politically expedient path to success in order to advance his legislative career. He cozied up to former Speaker John Boehner, and famously referred to Tea Party insurgents as, "lemmings with suicide vests...because jumping to your death is not enough," during the 2013 Shutdown. Later, Nunes bitched about the ousting of Boehner, blaming, "celebrity politicians," and, "for-profit conservatism," for the political demise of his drinking buddy. However, a few years earlier, Nunes refused to denounce racial slurs aimed at Rep. John Lewis during the Obamacare debates, and instead called Democrats "totalitarian" tyrants.

At the beginning of 2016, Nunes bitched that the Obama administration's lack of engagement in Syria allowed for a resurgent Russia and pledged to use his power on the HPSCI to combat international cyber crimes threatening American security. Apparently that was all just pillow talk since he's spent the last two years skull fucking Lady Liberty in the back of an Uber.

The primary opponent to Nunes this year is Fresno County Deputy District Attorney Andrew Janz. He's been trolling Nunes for months, erecting billboards and releasing campaign ads that call out Nunes for his role in the Trump-Russia scandal. As a result, Janz has been raking in cash, with reports showing Janz raising over $1 million in the first quarter of 2018 alone.

At first glance, Janz's candidacy looks a little hopeless. Nunes has overwhelmingly won his last two elections by more than 60 percent, and Trump won the district by nine points, 52.1 to 42.6. Those numbers look bleak until you look at the election returns and do some number crunching -- a third of registered voters never bothered to show up to the polls in 2016, most of them Democrats. If you look at a precinct-level map of 2016 returns in the 22nd, and compare that with a tract map of the median income you find that Nunes turned out his base of rich white people and pissed off farmers.

Again, this looks bad, but the raw numbers tell a different story. Of the 342,529 total voters in the district, a 32.82 to 42.82 percent divide exists between Democratic and Republican voters. Of that total, 19.31 percent are unaffiliated Independents, and there's an additional five percent of cranks and lunatics in registered fringe parties. If Janz convinced every registered Democrat and Independent to come out in November, he'd win with 52 percent. That's a tall order, but not an improbable one. A PPP poll from January shows a matchup between Nunes and Janz at 50-45, suggesting Nunes has been hemorrhaging support from Independents.

All the political fortune tellers say that this race is solidly in Nunes' favor, which is probably true if you don't take into account all the times he's shit the bed in the past year. Local papers have been reminding California's rural Republicans that they sent Nunes to Washington to sell water, not Trump-branded snake oil from the Koch brothers. The 22nd has just enough registered Democrats and Independents to put Janz over the top, but he can't do it without money, and a hell of a lot of gripping, grinning, and baby kissing. Janz could be attacked for taking on money from donors outside of the District due to his no PAC pledge, but Nunes could just as easily be attacked for his multi-million dollar war chest built by mega donors, dark money Super PACs, and all the swamp creatures that compose the Republican establishment, the Tea Party, and the gaggle of imbeciles that are, for lack of a better insult, the Trump caucus.

This is a critical election year, not just for Democrats, but for opportunistic asswipes like Devin Nunes. It wouldn't be out of character for Nunes to pivot off an electoral victory into a run at the Speaker's gavel or as minority leader should Paul Ryan decide to fuck off back to Wisconsin. His lifelong penchant for burying his nose in the ass of anyone who can give him a leg up has certainly continued under Trump, so it's not a stretch to assume Nunes is looking to move on up to a deluxe office on the East side of the Mall.

Since Nunes has come into office, his tenure in the House has been ineffective at best. Nunes has literally done nothing to help the rural farmers he represents, and his refusal to hold town halls in favor of talk radio call-ins shows that he's too cowardly to face his constituents. He has consistently been more interested in helping himself than voters and his legislative record over the last 15 years is proof. In the past year, Nunes has been more eager to carry water for the Trump administration than local farmers. California and the country have a lot of problems, but one of the simplest solutions would be removing Devin Nunes.

Wonkette is 100% ad-free and reader supported; the only asses we kiss are belong to candied bunnies.